Why greedy kids in Mahler 4th? 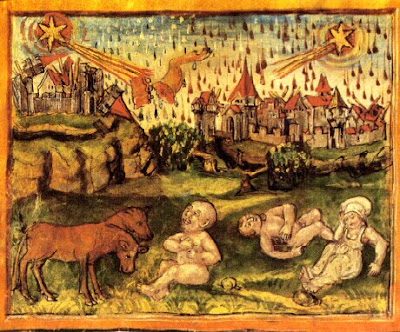 Why is the Das himmlische Leben, the final movement of Mahler's Fourth Symphony obsessed with images of food? It's a perceptive question because it's a path into Mahler's imagery that runs throughout his work. Many thanks to the person who emailed me.

"A disgusting Catholic meat eater's vision of Heaven" said one LP note of the 1960's. Nowadays thank goodness people know more about Mahler that such peevish silliness would be laughed at. Devout or not, Mahler knew a lot about medieval images. Symphony no 4 is the culmination of the Wunderhorn symphonies inspired by Des Knaben Wunderhorn, the collection of folk tales and poems Brentano and von Arnim sourced from peasant oral tradition.

War, famine, pestilence and dead children were a fact of life in medieval Europe, so naturally folk wisdom was haunted by such things. Folk wisdom was a source of many ideas too complex to deal with except through imagery, which is why the Romantics were fascinated. Death, fairies and magic opened the way for probing the subconscious. Hence the symphony needs to be understood in the context of the Wunderhorn songs. Das himmlisches Leben directly connects to Das irdisches Leben (heavenly life - earthly life) where a child keeps asking for food and is rejected. Und als das Brot gebacken war, Lag das Kind auf der Totenbahr. When the bread's ready, the kid is dead. Is it a tale of cruelty and child abuse (which did exist then as now)? Often the song is interpreted as a metaphor for the way artists don't get recognition til they're dead. But there's also the possibility that the mother was starving too and the song an attempt to lull the kid with a dream.

The child in Das himmlisches Leben is already dead. Its song is an act of comfort, so bereaved parents can be soothed in the belief that their lost child is happy in heaven and can no more suffer. So many children died young then, Mahler himself losing several siblings, so there were lots of people who needed comfort. Believing that the child was safe in the afterlife meant a great deal. Wir führen ein englisches Leben, Sind dennoch ganz lustig daneben. "We're dancing, springing, skipping, singing". Happiness and health restored. The concept pops up again in Kindertotenlieder.

Matthias Goerne will be singing Kindertotenlieder at the Proms on Friday 4th September. You can hear the performance live, on broadcast, online and on TV by going to the Proms site
Please read a description of him singing Kindertotenlieder at a recent recital HERE. As always, it helps to know a bit about the repertoire if needed, read in advance and try and figure out what a performer may be getting at.

The Saints in the song represent loving family figures, Sankt Marthe the cook, Sankt Peter catching fish, not at all a stuffy first Patriarch. Sure, Saint Luke (a physician in the Bible) slaughters the lamb ohn' einig's Andenken und Achten, without thinking too much of it but again that fits the mystical idea that death affords life. Any Catholic kid knows Jesus was a willing Lamb. Death is so much a part of existence that there's no pretending it's not, particularly if there's a redemptive purpose. Which is why the crucially important interlude before the final strophe.

This marks a transition from innocent childlike glee to something much more sophisticated. Kein Musik ist ja nicht auf Erden, Die unsrer verglichen kann werden, In Heaven there's work to be done, and it's singing. Then looms the memory of the horrors of earthly life. Saint Ursula was a woman who led an army of 11,000 virgins to their deaths and worse, during the Crusades. Needless to say, these "willing lambs" didn't stand a chance, most of them dying along the way. So there they are fulfilling their purpose in Heaven, with Saint Cecilia, the patron of music. So it's certainly not simple fun. It's sehr behaglich but not bucolic. Sacrifice and death are an unavoidable stage in the jouney to eternal life. Mahler all over, even to the 10th.

Mahler himself told Bruno Walter that the symphony reminded him of the statues in a medieval church, saints, their hands solemnly folded across their chests, but whose calm faith in a better afterlife lights their faces with gentle smiles. Saints often die grisly deaths after deprived lives, but their faith in eternal resurrection sustains them with unearthly serenity.

Understanding the role of the movement is essential to understanding the symphony as a whole. Tempting as it is to listen to Wir Geneissen on its own, it needs to be approached through the symphony. The third movement absolutely connects to the fourth - turmoil and anguish leading to apotheosis.

That's why it's so important that the soloist participates even though she's not singing. It's a test of a conductor what he gets the singer to do. Last year, Eschenbach had Marisol Montalvo enter quietly after the second movement, and sit, eyes closed, imaging the third, so when she started to sing, her performance grew naturally from it. Gergiev had his soloist carefully walk on DURING the introduction, wearing a scarlet dress, deliberately distracting from the extremely important opening bars. "Ignore the instrumental!" Gergiev must have said. Then as she reached the podium she burst into song as if this were a number in a West End musical, to be belted out regardless of meaning or of musical context. Read about it HERE. Perhaps the Gergiev approach is the future of Mahler performance now that it's fashionable to get on the Mahler bandwagon whether or not one gives a toss about the composer. But not for me.
Please bookmark or subscribe to this blog, there is LOTS about Mahler and connected music, and will be lots more ! Look at other pieces already done - lots ! and more to come ! Please look at the series on Das Lied von der Erde images and Kindertotenlieder

Hello hello. I loved the part about the medieval imagery, and the picture is intriguing! Liking the blog; I've decided to follow it. Mine is sort of based on classical music (and writing) but more piano-centered. Thanks so much for this treasure trove of information!

Hi Jessica, you're always welcome aboard. I looked at your site Perfect Fourth
http://jmaybury.blogspot.com/