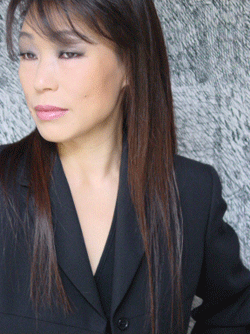 Back to adventurous programming with the world premiere of Unsuk Chin's Cello Concerto. It's ideal Proms music - massive orchestra, special effects including a row of soft drink bottles, a star soloist battling heroically against overwhelming forces. Cannot and does not fail to impress, particularly the soloist Alban Gerhardt. Watched close up on the TV rebroadcast, you can see him wince and sweat, and can fully identify with him, which makes you even more sympathetic.

Impressive as the piece is, I'm not completely convinced. Of course all new music needs time to settle, but I listen to enough that it's possible to feel what may or may not eventually gel. Unsuk Chin is good, but dogged by a fanbase that isn't necessarily musical but has heard of Ligeti, so assume she must be on the same level. This creates an image of fashionableness which doesn't act in the composer's best interests. Stil,l at least it means mega publicity for new music. And there's plenty in the Cello Concerto to please.

On repeat listening, maybe there is too much. When Gerhardt is playing on his own, the line is quite wonderfully inventive, and the sudden flashes of precise attack, particularly from the orchestral strings, are stunning. Overall, though, perhaps the need to make a dramatic impression obscures the otherwise strong skeleton of this semi-symphony which evolves over 4 movements. There is a very interesting commentary on the BBC site which picks up on things that are too muted to hear. Because it's based on the score it elucidates what might sound like an undiffrentiated hum or wash. I still feel the piece is a little too self consciously clever for my taste, but anyway the link is here.

Stravinsky's The Rite of Spring, on the other hand, sounds massive but actually is tightly scored, the instruments moving in precise, jaggedly defined blocks. No wonder it caused a riot! Suddenly primitive barbarism pounds itself into the refined realm of "pretty" ballet. Wham, wham, wham! Stravinsky creates the modern by accessing roots far deeper than western mainstream convention. That's what Picasso was doing with African carvings, what Debussy did when he collected Japanese woodblocks, what Bartok would do with Hungarian folk music. Like the girl who sacrifices herself so the Spring will return and renew the earth, Stravinsky connects to a different consciousness.

Savagery didn't quite come to mind in this performance, by Ivan Volkov and the BBC Scottish Orchestra. This was a reading that highlighted the lyrical, verdant mood, which is perfectly valid. The Rite of Spring is so amazing that it can take many forms. Yet it is also a ritual, so it would have been better with sharper focus on how the basic building blocks of sound are the foundation of the piece.
at August 14, 2009