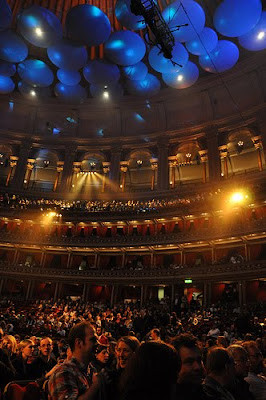 What must it be like to walk on stage at the Royal Albert Hall knowing that 6000 people are waiting for you, and thousands more tuned in all round the world? Debuts do not come any more high profile than this. The pressure must have been terrifying: with all the world listening, your whole future might depend on this moment.

What could have been in Karim Said's mind? He's just 21, relatively unknown, completely the opposite of the usual young prodigy packaged and sold as Instant Wunderkind. Read about his background in articles HERE.

If anything, those around Said deliberately sheltered him from the media circus. so he could develop at his own pace. It was important to his family and those who cared for him that he develop as a whole person, not a music machine. Shocking as it may be to many, there's more to life than music. Or rather, life "is" music. Art enhances life and a life well lived is a work of art. As Daniel Barenboim's career has proved.

Barenboim is a brilliant pianist and conductor. But perhaps what he'll be remembered for is that he cared about people. Please read the article HERE in which Barenboim talks to Ivan Hewett about the West-Eastern Divan Orchestra and what the whole project signifies. It's a Goethe ideal, which is why the orchestra met in Weimar. This is no ordinary youth orchestra, and certainly not a social experiment to get kids off the street. All its members are talented, and so dedicated to music that they're prepared to take massive risks. Playing together is an act of courage. For music, they're putting a lot on the line.

So when Karim Said and his colleagues stood on that stage tonight, it was a historic moment. It was amazing to see the Royal Albert Hall almost full to capacity for a late night Prom. Karim has lots of friends, since he studied in this country and is a gregarious fellow, but this was something more. After all the West-Eastern Divan Orchestra has played at the Proms regularly for years. Said is an unsually mature player, extremely intuitive and perceptive. As Barenboim, who was a child prodigy himself, said: "He already knows what cannot be taught".

The whole ensemble playing together were very good, of a much higher standard than many their age, particularly considering they don't have the same advantages. Berg's Chamber Concerto is a test of musicianship because it contains so many intricate interactions. The piano and the violin (played by Michael Barenboim), have demanding roles, but part of the beauty of the piece is that they stay silent for long periods - listening. Said is impressive technically, but even more so in that he makes what he plays flow naturally, as if it just "is". Hard to explain. I was close enough to watch his fingers, unexpectedly delicate, fly across the keys. No flamboyant bravura, rather an effortless elegance and grace.

Obviously it's far too early to start making wild claims but neither would it be fair to put down someone with such genuine potential. Talented people always draw jealous fire. And Said has decades ahead of him. He's good enough that you know he's going somewhere. I certainly won't forget this first Proms performance. Karim Said has charisma, make no mistake. He stood up, still somewhat gauche in his body language (which is quite endearing). He turned to smile at his friends and then up into that vast audience, lights dazzling. What must he have been thinking? It must have been awesome. To my surprise, I started to cry, as if I were his mum.

This was a spectacular Prom, the musical and non-musical achievements of this orchestra being tremendous.

Said's playing is very enjoyable and I would wish him every success as well as hoping to hear him again.

Radio 3 are broadcasting a repeat on 2 September in the afternoon.