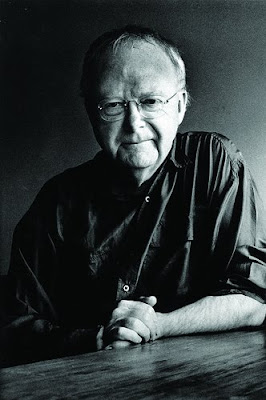 De Staat is a seminally important work. So much modern music stems from it, not only "serious" classical music but progressive popular music too. No De Staat no Different Trains and many other things.

De Staat is so radical that it still sounds fresh after almost 40 years. Essentially, it's a wild, almost savage piece that breaks all the rules of form and development that constitute formal music. But such manic, kinetic energy! Driving, compelling rhythmic patterns drive the piece forward. The patterns are circular, revolving on themselves relentlessly without beginning or end. Structurally, blocks of density are intersected by planes of sharp brightness.

De Staat is also interesting because it transcends text. It's based on Plato's The Republic where music is denounced as a form of subversion. The words matter. At early performances, audiences were given the text to read carefully. Yet De Staat transcends text. The singing is deliberately embedded into the music, almost abstract, like a cryptic code whose meaning goes deeper than surface words. Modern music doesn't do simple word-painting. Meaning is absorbed, translated into abstract sound. Much modern writing approaches this state too. Just yesterday we heard Rebecca Saunders's Traces, which springs from Samuel Beckett's exploratory syntax. (Another Beckett-inspired composer is Pascal Dusapin)

The texts are in ancient Greek, which most people don't understand nowadays, which is all the more reason to focus on how the music itself expresses meaning, not just the words. The final chorus is illuminating for it quotes authoritarian dogma against innovation. "Change always invokes far-reaching danger. Any alteration in the modes of music is always followed by alteration in the most fundamental laws of the State". Nothing has changed since Plato. Modern music is hated for much the same reasons, as if easy music makes life safe.

So Andriessen's unremitting, hard driving planes of sound express something about society and its pressures. This Proms performance, conducted by Lucas Vis, leading the Netherlands Wind Ensemble, celebrated the composer's birthday, so wasn't quite as intense as some performances, where the relentless, pounding rhythms create severe anxiety and tension. This is an ensemble for whom the work is basic repertoire – listen to the live recording, also by the Netherlands Wind Ensemble, from the 1978 Holland Festival, included as a CD in the book by Robert Adlington, Louis Andriessen : De Staat (2004).

This sense of fear and danger is important, for the driving repetitions represent the idea of conformity. Hence the need for tight, disciplined performance. Repetition is conformity, strictly imposed. From which freedom, non-conformity and creative innovation can break loose. Perhaps that's why I admire Ravel's Bolero and liked Salonen's perceptive performance).

The very structure of De Staat is meaning. As Andriessen has said, "there is no hierarchy in the parts". The chorus is only one of the several units in the piece that function in parallel, rather like society itself. Hence the phalanx of brass positioned on both sides of the orchestra, and the "chorus" of violas and lower strings. Voices may be suppressed in authoritarian states, but abstract music can still speak.

This programme was extremely well chosen, placing De Staat between Steve Martland's Beat the Retreat and Cornelis de Bondt's Closed Doors. Martland's piece is a protest against government laws on outdoors entertainment, a cheerful act of irreverent anarchy. De Bondt's piece, from 1985, starts and ends with a deep sonic boom that reverbrated nicely in the Royal Albert Hall. It's part of a much larger work that pivots different threads of music history upon each other. That's why there were two conductors, not in itself any big deal (Charles Ives did it decades ago). Like De Staat, the material circulates, disparate parts that can't meld.

Another recommended recording of De Staat is by the Schoenberg Ensemble, conducted by Reinbert de Leeuw, a superb performance, with a stellar group of singers, but with one big caveat, that's all there is on the disc and it's expensive. The Netherlands Wind Ensemble recording includes Il Principe, part of a series of works associated with De Staat as a kind of mega-cycle (and you get the book, too).

This Prom was woefully under-attended, perhaps because it was the start of the last holiday weekend of the summer, when everyone's out of town, or perhaps because the early evening concert was Tchaikovsky, whose fans don't overlap with Andriessen's. But that's why broadcast and online repeat listening is so valuable. Not everyone can have the luxury of getting into London for a concert that ends after much public transport closes for the night. But many, many more get to hear the music at home, or on the radio, wherever they may be, in London or anywhere else. Why should music be the privilege of a closed elite? Thank goodness for technological innovation!
at August 29, 2009