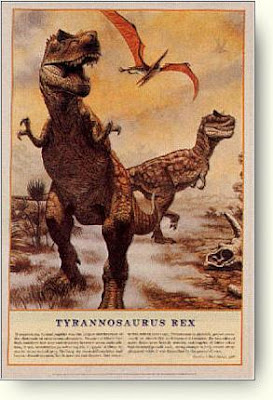 Massive dinosaur heads, audience participation, funny instruments, loud noises! Just as museums don't do stuffed dinosaurs anymore, neither do the Proms do stuffy music. Before Prom 21 and 23 the audience was rehearsed, sort of, in something called The Big Bang. Great idea because it helped the audience – mostly kids and carers – appreciate that music is a living thing people create. It's not something fossilized behind glass. The music was actually quite fun. The Big Bang Theory demonstrated, reproduced like an experiment, live, in a lab, as proof of concept.

Programming was adventurous too. Jon Lief's Hekla, no less, billed as the "loudest music ever written". Liefs was trying to evoke the spirit of his native Iceland, with its volcanos and primeval legends. Pretty good for a Prom at any time, not just a Prom for kids. And he's modern, too. Howling babies added to the effect. Not so good for the mums, but good for the experience.

The rest of the programme was straightforward – Copland's Fanfare for the Common Man, Delius On hearing the first cuckoo of Spring. There's plenty of inspiring music if you take the Darwin theme as meaning the wonders of Nature. So why soundtracks from movies adults may have seen but which happened before most of this audience was born? In blockbusters like Jurassic Park, music is just a means to an end, which is to suck the audience into the film. You aren't supposed to be listening, just picking up clues. Grumbling roars = the dinosaurs are coming! Without the film, the music is pointless. It's a bit like watching a washing machine instead of TV.

As David Attenborough said, we don't know what dinosaurs sounded like, what their skins, colours and social habits really were. That's WHY science is such an adventure. It's about finding things out, not trotting out the same old assumptions. The spirit of science and the spirit of creative art are one and the same thing. Though I didn't get round to hearing the piece by Goldie, a "new music" composer in the sense that he didn't used to do classical, in principle, the fact that he does what he did is a good thing. It's the sense of wonder, and adventure, that makes science - and music - fun.

Attenborough was brilliant. Even though he only appeared for a few minutes, in that short span, he said more in those moments than the presenters probably say in weeks. Attenborough shows that it's not necessary to dumb down for kids. All he does is know his stuff and be enthusiastic about it. That's why he's fascinating, even to people 3 foot high with limited verbal skills. He makes you want to know what makes things so much fun for him.

In contrast, TV presenting for children these days seems geared to making them as cynical and blasé as possible, to instil in them the idea that any kind of mental effort is a kind of crime. A miasma of anti-learning banality hangs over children's TV like a gas cloud over a swamp. Any kid who might want to stand up and breathe must struggle past the blanket of put-down. And it's not just kids' TV. One of the BBC's greatest creations was Blue Peter, a show where kids most certainly were expected to think and act for themselves. Naff as it may seem today, it was a different approach to the business of growing up. Kids are born with a sense of wonder, til it gets squashed out of them by life. Nowadays, people don't "grow up", so it's a concept as dead as the dodo.
at August 03, 2009

Email ThisBlogThis!Share to TwitterShare to FacebookShare to Pinterest
Labels: music for kids, Proms 2009

Thanks for sharing your knowledge.