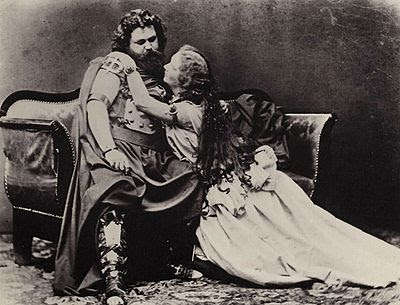 What was all the fuss about? When this Tristan und Isolde first came to Bayreuth it was slammed. You'd think the heavens had fallen. Now Siemens AG and Bayreuther Festspiele are streaming a webcast online straight from the Bayreuth Festival, we can all see the notorious Marthaler production and wonder why it seemed so shocking.

This T&I isn't abstract or minimalist. Indeed, it's more realistic than most around these days. So the sets and costumes are vaguely 20th century? The story is about ideas, not about tapestries or fake chainmail. Indeed, the setting says quite a lot about some of the deeper themes in the opera that aren't often addressed.

So we don't see ships and sails as Isolde and Brangäne travel to Cornwall. But Isolde's a VIP, a queen to be. She doesn't travel cattle class. So Act One is set in a cavernous ballroom, with brocade banquettes, just as you'd expect on a liner. Perhaps the Titanic. Because she is doomed. The finery is shabby, you can almost smell the dust. Again, that's part of the plot: Isolde has been traded off, her power diminished. Once she would have been surrounded by retainers. Now the chairs are empty and all she has is Brangäne, the two of them huddled alone amid the faded splendour.

When Tristan comes in, she confronts him. While the long interlude plays, she overturns the empty chairs, one by one, slowly and deliberately. She overturns the order of things, this Isolde.

Act Two is even more pointed. Isolde and Brangäne are in a vast chamber, where the walls are lined with gold velvet. They're dressed in shiny silk: Isolde's dress is boxy pastel,like something the Queen, her mother and sisters used to wear: a kind of royal uniform, expensive but bland, its formality giving nothing away about the woman inside. Her arms are sheathed in white gloves. The hairdos are like armour, bouffants melded by so much hairspray they could be helmets. Those coy curls and flips aren't as soft and girlie as they seem. Royalty is about power images.

Yet Isolde isn't powerful any more. She's become a possession, a political pawn for King Marke to display. So the Barbie doll unreality underlines her status as royal Stepford Wife. Beyond the glass doors, guards stand at attention, to keep her in as well as keep others out.

In the Third Act, Tristan is in a hospital bed. Why not, as he's dying. The set also references the walls of his castle, so when he sings of his childhood it's poignant. The sea, the shepherd and Isolde are real enough in his mind. Isolde arrives, wearing rough clothes, her hair shorn short. Why not? Power and glory mean nothing to her now. She's no longer playing politics but acting through selfless love. No more need for show. When she sings the Liebestod, she'll be transfigured anyway by the music. Inner beauty, all the more compelling in the grim surroundings.

Most striking in this production was Iréne Theorin's acting. This Isolde is a fully rounded personality, who fools about and stretches with the abandon of a teenager, so Brangane has to keep pushing her down. The detail of Christoph Markthaler's directing would probably have been lost in the auditorium. For example, there's a single chord of brightness in one long passage: for a moment, Isolde bursts into a robust smile, forgetting where she is. Once, she was wild and free, a powerful healer and a force for life. The spark is still there, as she moves and bends wilfully. This Isolde is a true sister of Brünnhilde, who doesn't do patriarchy. Yet now she's trapped, curtailed, like Brünnhilde made mortal. No wonder she paces the walls, searching for what lies beyond.

Theorin's singing, too, was convincing. She may not be the greatest Isolde ever, but she has little competition from Robert Dean Smith. It's not his fault that he doesn't look like a hero, but then neither did Ludwig Schnorr. The makeup that did wonders for the women didn't help him either. He looks younger and prettier than Isolde. (What primer is the makeup person using? It works) Nor does he sing like a tough knight who's had an eventful past. He's fairly solid in passages hovering at the lower end of his scale, but once the lines push upwards, he has more difficulty. At few wobbly moments, especially in his death scene. On the other hand, he's dying so maybe we should be kind. Marthaler's attention to detail should have extended to Dean Smith's acting, so Tristan wouldn't have looked so self-absorbed. He's supposed to be enthralled.

Robert Holl's King Marke was very impressive. He sang with real authority, yet laced with tenderness and maturity. This was a good characterization, well rounded. When he finds Isolde in delicto he doesn't lose his cool, but puts his arm round her in tacit support : a Melot would stab her. Though maybe not Ralf Liukas's Melot who seems a fairly unevil guy.

Good singing from Michelle Breedt as Brangäne. Her characterization is particularly interesting. Too often the part is bland, as if the role is a cipher. Here thoygh, the dynamic between the two women really is a relationship between women, not cardboard cutouts. Breedt's Brangäne has personality, wit, even sensuality as hinted in the deep rosered of her cardigan and lipstick. Her eyes sparkle, sometimes with joy becaause she loves Isolde, somethimes with terror as she rushes to get her out of jams, like when they're about to disembark. Brangäne is underrated as a character, but she's important. So it's good to study Breedt's acting and find greater depths.

Jukka Rasilainen's Kurnewal was interesting. The vaguely highland costume with kilt presumably references the character's Celtic background, but also works because it sets him apart from the others. Kurnewal, compared with Melot, is untamed, and still has the uncivilized wildness that we see in Theormin's Isolde. He paces the walls, too, and jumps up on chairs. Interesting that Tristan goes for this type. One day maybe we'll see a Tristan that expands the part and deals with his past. Tristan is not a blank, like Siegfried. Would he have been happy as King one day ? maybe it's just as well he sought out death. Apart from a few vocal quirks, (FrauWen !") Rasilainen might have a good future.

The orchestra was good, again apart from odd infelicities (the shepherd's tune slightly off kilter at first) but live performance isn't about perfection. Nor does everything in a production have to be the best or worst ever. I loved the final image, where Theorin draws the sheet that Tristan slept under over her own head, as she lies in his bed. It's erotic and yet also a gesture of the complete self denial that such intense love represents. Isolde is united with Tristan and nothing else matters any more, no more royalty, no more power games, no more pain. Once she covered herself in clothes and wigs. Now when she pulls the white sheet over her face, all the grubbiness of the world is irrelevant. She's disappeared somewhere more pure, more perfect, where self no longer exists, only the sublime. Like Brünnhilde's renunciation of the Ring and final immolation.

Get the download from the Siemens site linked above until 24 August. It's 14.90 Euro which allows repeat viewing. Much cheaper than Bayreuth and you don't have to do power games or be rich to get there, either. Now THAT is something Richard Wagner, proto socialist, would have appreciated.
at August 11, 2009