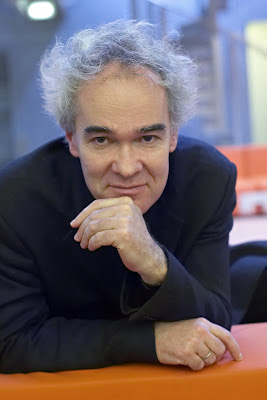 This could have been a big number Prom with Berlioz and Beethoven's Third Symphony. But my sole reason for listening was the world premiere of the new 2 movement version of Michael Jarrell's Sillages.

Sillages was once Congruences, a piece for electronics inspired by Jarrell's time with IRCAM. Here he's transcribed it for ordinary instruments and expanded it with a second movement which takes the ideas in a new direction. Jarrell's music is elusive, like it's in a constant state of flux. That's why it's interesting. Music isn't really ever "completed" but grows and changes. Filling a page with notation is only part of the process.

Thus the evanescent nature of the piece. Three soloists - Emmanuel Pahud, François Leleux and Paul Meyer (of the formidable Meyer clan) circulate around each other. Flute, oboe and clarinet are each instruments that can stretch sound almost indefinitely, their vibrations extending beyond the physical act of being blown, so the sounds integrate and interact. The orchestra is pulled in their wake, the echoes gradually dispersing like cloud trails in the sky, following an aeroplane that has flown out of sight. The stillness of the first movement is magical: wonderfully elusive textures, played with shimmering delicacy. Sound is vibration : Pahud, Leleux and Meyer make you feel the invisible movement.

In the second section, brass and orchestral strings become more dominant, changing the nature of the vibrations. It's less esoteric than the three haunting winds. It will be good to hear this piece again, played by an orchestra more attuned to the floating fluidity of Jarrell's music.

Jarrell is an interesting, sensitive thinker. "Life is like a chain reaction", he says in the post concert interview, "you open up, try to understand and grasp things till they become you". Later he uses the metaphor of coffee to explain why ideas need developing through thought and experience. No one loves coffee the first time they taste it, but gradually they understand the connotations and learn to value it. Even if they still don't like coffee at least they don't assume their first impression is the only valid way to go. So often, thanks to books like Alex Ross's, people talk about music as if it were created by rules and rigid schools. But for real musicians, even those who spout theory, the actual process of creation has always been far more complex, even contradictory. Only fools think that using Sibelius the programme will produce results like Sibelius the composer!