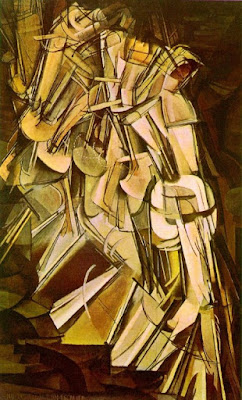 George Antheil's Ballet mécanique is a spectacle. So get to Prom 33 on Sunday 9th August - this is music to watch as well as hear. Ballet mécanique is an icon. It was so visionary that it's only been in the last few years that the technology has existed to create it in "pure" performance. This involves 16 - sixteen - player pianos, propellers, sirens, percussion, xylophones, alarm bells etc and two normal pianos. It's "mechanical ballet" where machines take on the role of dancers, pushing the Rite of Spring to the nth conclusion, which is perhaps another reason it's on with Stravinsky's Les Noces.

The idea of Ballet mécanique is to depict perpetual motion, a new kind of experience of time and action. Think of Marcel Duchamp's Nude descending a staircase, where each part of the woman's body keeps vibrating.

The Proms version will probably be the one Antheil wrote in 1953 for only four pianos, but should still be impressive. It's not something that gets played too often, so do not miss the opportunity. The pianists involved include John Constable and Rolf Hind.

Alfredo Casella, whose orchestration of Balakirev's Islamey so astounded Stravinsky, featured in Prom 30 (Listen to it on rebroadcast -- it's amazing! ) was one of the Italian Futurists who wanted to create a whole new concept of aesthetics that embraced machines and urban processes, speed and energy. Look up Tomasso Marinetti, the great artist and theorist. Visit the exhibition currently on at the Tate Modern on Futurist Painting (runs to 20th September) The concept had much wider currency, influencing music and film. Fritz Lang's Metropolis is a fairy tale romance on Futurist themes. Techno Petroushka !

This is the Ferdnard Léger film made to go with the music. It's very interesting as Léger was such an influential artist. As music, though, the version by Ensemble Modern is the one to go for. Here's Part 2 of the film, followed by a clip of the premiere of the all mechanical 16 pianola version in 2006. Enjoy !