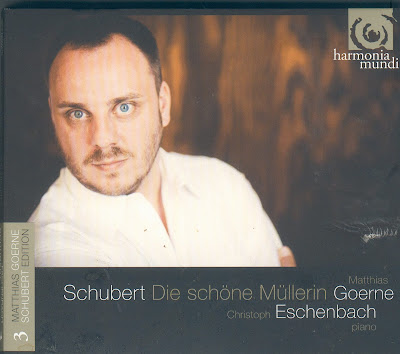 What is Schubert's Die Schöne Müllerin? Is it a pretty tale of a boy falling in love amid flowers? What is the babbling brook babbling? Listen carefully to the words, and to the piano part.

In Winterreise, the distraught man walks off into the wilderness when he's rejected. We come across the miller's lad when he's already on a journey, we don't know his past. All we know is that the lad in DsM is already a wanderer, or, as we'd say today, a drifter. And whatever may happen to the man in Winterreise, he doesn't unequivocally end up dead.

Every year there's a new crop of Die Schöne Müllerins because it's such a fascinating cycle. This new recording, by Matthias Goerne and Christoph Eschenbach on Hatmonia Mundi, is outstanding. Although there are hundreds of recordings to choose from, this one will be one of the classics. Goerne has been developing the cycle for years. Ten years ago his recording, with Eric Schneider on Decca, shocked the Lieder world. As Goerne said at the time, "What's pretty about teenage suicide?"

Even by the standards of Romantic taste, the miller's lad is neurotic. The piano rhythms are unrelenting, like the way a mill wheel turns, operating the mechanism that crushes wheat into flour. Right from the start the poet makes it clear that this isn't an ordinary journeyman, travelling from place to place seeking work. "Das Wandern ist der Müller's Lust, das Wandern!" (his exclamation point, not mine.This fellow likes the business because it's unstable. He's not really interested in settling. It's the brook he's following. "Vom Wasser haben wir's gelernt, vom Wasser!". Mills just happen to be situated on flowing streams. So the pounding rhythms in the piano part are there for a purpose, and aren't merely decorative.

The brook is a presence, with its own motives and personality. It's the second protagonist, much more vivid than the girl. It speaks through the piano part, so, even more than usual, an intuitive pianist is essential. Christoph Eschenbach's playing is exceptional, each note carefully placed and shaded, its charm and elegance developing into outright menace near the end. The final Wegenlied is no lullaby. The brook doesn't mother but jealously smothers. Not even blaue Blümelien are allowed to look in. This is where those relentless rhythms were leading, and why they don't let go. Eschenbach shows how they mimic footfalls, but they're far more powerful.

Eschenbach was a pianist long before he started conducting. His wartime childhood was so traumatic that he was unable to speak until he was about 12, when his adoptive parents got him a piano. So this is a man who understands instinctively how a piano can express things that can't be put into words. Dozens of great pianists have loved this cycle - Richter, Brendel, Cooper, but Eschenbach brings something extra, making this disc a must for anyone wanting to appreciate the piano part and how it works with the voice.

But Goerne! Here he is in perfect voice. He's still only 41, young by singer standards, but has been singing since he was a child. Experience, and emotional depth, does matter in a cycle like DsM, which operates on several different levels. It's not enough to sing on the surface. Fritz Wunderlich's performances are so preternaturally beautiful, all other considerations are suspended: rather like listening to someone so delusional that you're drawn into the glow of their unreality. Not that Wunderlich probably realized, he was just in love with himself. Like Narcissus who loved his reflection in the water, fell in and drowned. Maybe that's why Wunderlich's recording works despite its being shallow. It's closer to DsM than we realize ?

Listen to how Goerne breathes nuance into the words with obvious effort flowing into the curved shapes of phrases like an elegant, sensuous musical instruments. This is Lieder singing, where musical sensitivity is part of the aesthetic. Don't approach with opera values. Lieder sings don't "act", they channel. If there's one thing tha might sum up Goerne's performance, it's that he's singing with a palpable sense of wonder. For wonder is part of this cycle. The miller's lad is wonderstruck by the brook and what it reveals to him. He talks to it, asking for signals, ignoring the real girl beside him on the riverbank. These songs are the intimate heart of the cycle, tinged with tenderness. The miller's lad gets angry with the girl because she has a life in which he doesn't play a part. She hasn't done anything bad, but the brook plays upon his insecurity, its malevolence towards her more violent than his own pain. That's why the blue flowers in the Wegenlied pose such a threat to the brook's hold over the boy, for they represent the girl's eyes and an alternative reality.

Goerne's first Die Schöne Müllerin is crucial because it is the most haunted, savage version around, an important antidote to superficial pap, but for that same reason it isn't comfortable to listen to because it's not a comfortable subject. This new recording, with Eschenbach, certainly does not stint on meaning, but shrouds it in more complex mystery. The miller's lad here is truly bewitched, engrossed in the wonder of the secret bond he has with the brook. To him, such magic is more natural than outside reality. In many ways, this approach is far more unsettling than the earlier recording because it seems so seductive and convincing. But beware.

The elegance and refinement of Goerne's singing is like the brook, lots of hidden depths beneath the surface. It's a journey through several stages, but you get sucked into the miller's mind without hardly realizing. Yet Goerne's controlled restraint at critical points reminds us that the lad's mind is not a good place to be. This performance is utterly compelling, yet in some ways even more disturbing than the first, because it's so seductive. I've heard dozens of DsMs over 40 years, but this one is easily one of the best, top of my listening pile for the last 3 months.
at September 02, 2009