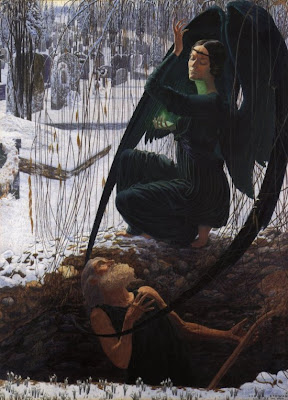 Totengräber’s Heimweh was the outstanding point in an excellent second Schubert recital by Matthias Goerne at the Wigmore Hall. A gravedigger looks at the hole he's just dug and thinks how cool it would be to lie there dead. This is echt Romanticism, death as apotheosis. Schubert sets the poem with obsessive pounding rhythms which might reflect the digging, or perhaps the gravedigger’s heart. Gradually the music shifts into a higher key, and the gravedigger gets his wish and falls down dead. Above is a painting from 1895 by Carlos Schwabe, made decades after Schubert's immortal song. It's painted with Jugendstil stylization which to this day looks eerily modern. It could start a whole new Goth cult!

Goerne sang the word “Ferne” with such fervour that it feels like the whole song (and the gravedigger) was levitating, searching for something distant. “Ich sinke, ich sinke”, he sings, but gradually, through finely gauged modulation, this becomes “Ich komme”, supported by starlight-suggesting motifs. The song is an old Lieder warhorse: Goerne made it sound utterly fresh (oops wrong choice of word) and immediate.

Most performers leave Nacht und Träume until the end of a concert: it’s a stunning showstopper. It was a brave choice as the first song and the thematic core of this recital revolving around Romantic concerns such as philosophy and death, approached through songs ostensibly about moonlit landscapes and starlight. Nacht und Träume is a hymn to the wonder of dreams (and by extension, the imagination). But dreams do not last, so we’re left in perpetual longing. Thus Goerne stretched the long, floating lines, so they seemed as wonderful as the dreams they describe.

Another song that stood out was Schubert's setting of Ernst Konrad Friedrich Schulze, Der liebliche Sterne. Schulze was an even more disturbed personaliity tha Mayrhofer, whose morbid poems inspired Schubert to write some of his finest songs (see HERE). Schulze was obssessed with two young sisters, and when one died he made a cult of her memory. Fortunately for the other sister, Schulze died young, before he could become dangerous.

What drew Schubert to poets like Mayrhofer and Schulze? Did he even sense how disturbed they were? Quite possibly. Schulze, like Schubert, was fixated on starlight. In the first Shulze setting in this recital, Tiefes Leid (great sorrow), there's a deliberate disjunction between the morbid text and the lovely secondary melody that floats almost independently. Like starlight, it flickers and fluctuates out of focus. And so in the song, where Goerne alternated hushed reverence with deliberately over-bright clarity: it's the "glow of madness" that can, like starlight, light up one obsession and throw all else off perspective.

In Der liebliche Stern, staccato quavers evoke something even more chillingly obsessive than the twinkling of stars. The words seem innocent, almost child-like in their self-belief, but the central image is a whirlpool into which the poet wants to violently throw himself. Goerne’s voice is magnificent but what makes him truly unique is his ability to convey psychological complexities, subtly by the slightest change of nuance. In real life, nutters aren't always painfully obvious. Had Alexander Schmalcz’s playing been of the same level this would have been truly unnerving.

So that's why Lieder with its morbid fixations still has the power to fascinate. it's about people, and how they respond to extreme situations. We may no longer treasure locks of hair from the dead or wander listlessly through cypress groves, sighing for lovers we didn't actually know. But we all come across human trauma.

Please see the full review in detail in Classical Source
Please also see the other posts on Schubert and Goerne on this site - more Lieder coverage on this blog than anywhere else ! Have fun exploring.
at September 21, 2009

Oh, man, how I hope this one was recorded and will come out on Wigmore Live.

I've heard Goerne live only only once, as the baritone soloists the Brahms Requiem. Riveting, beautiful, deep, far and away the best I've ever heard.

And I envy you Fred Frith ! Hero of my youth who never comes to London anymore. Goerne doesnt record all that much for a big name but currently he's starting a complete Schubert series for Harmonia Mundi. No Totengrabers Heimweh so far in that but some Mayrhofer. His Die schone Mullerin with Eschenbach is exceptionally good, see what I wrote earlier) Amazing how deep this guy is.

It's true that the Carlsbad Festival is hundreds of miles from me in Southern Cal. But Frith's home base at Mills College is a 20-minute walk from my house.

That said, the Wigmore Hall lineups always leave me drooling. London is pretty much the musical capital of the world, as far as I'm concerned.