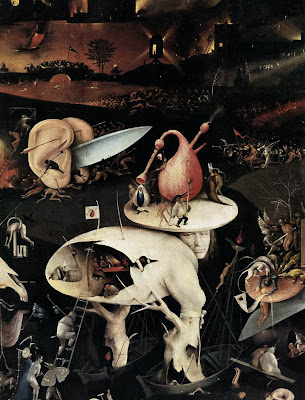 Extreme theatre! A massive female figure fills the whole stage at the ENO for Ligeti's Le Grand Macabre, in this amazing production from La Fura dels Baus (Alex Ollé). The giant woman is a miracle of motors and pulleys, engineering transfigured as art. She's obviously not alive, but she moves, following the action. She takes on whatever is projected onto her, changing with light from woman to man, ageing, decaying, turning into a skull. She's solid enough to support actors crawling over her yet seems to disappear into starlight or clouds when the lighting's right. Her body opens to reveal secret caverns. She's so wonderful you're mesmerised.

"A dress rehearsal for the end of the world" wrote Michel de Ghelderode whose original play inspired Ligeti's "anti-opera". Le Grand Macabre is an apocalyptic vision after Hieronymus Bosch, Theatre of the Absurd at its most picaresque. Nothing is supposed to make sense, all logic overturned. So lovers Amando and Amanda (Frances Bourne and Rebecca Bottone, both women) wear their muscles outside their skin. Nekrotzar, note the nameplay (Pavlo Hunka) is the all powerful figure of Death, who rides a plastic bubble horse while wielding a scythe.

There's lots of action, for this is Breughelland, teeming with busy figures. Venus (Susanna Andersson) slides down from the ceiling, and later appears as singing stormtrooper. Lots of deliberately unerotic sexual shennanigans - Astramodars (Frode Olsen) and his wife Mescalina (Susan Bickley), she of the conical size ZZ bra cups. The Black Minister (Simon Butteriss) and The White Minister (Daniel Norman) exchange playground obscenities in alphabetical order. Piet the Pot ((Wolfgang Ablinger-Sperrhacke) is a down to earth drunk. Prince Go-Go (Andrew Watts, the countertenor) portrays a sad Elvis impersonator, his naivety no match for the evil plotters around him. There's even a recreation of Michael Jackson's Thriller dance routine to keep the chorus and actors on their toes.

It's wildly madcap, lots of fun if taken on its own terms. This audience certainly got the mood, for there was lots of laughter. This production is so inherently dramatic that it "is" the opera, and the giant woman very much one of the characters. The difficulty with Le Grand Macabre, though, is that it's not easy to marry humour with horror. Some of Ligeti's humour is pretty asinine anyway, without the saving grace of shock, but there's a lot more darkness and despair in his music than this production dwells on. On the other hand, human nature being what it is chooses levity over grim surreality any time.

In the Second Act, where Ligeti writes longer musical passages without narrative, Baldur Brönimann got reasonably idiomatic playing from the orchestra. Nonetheless this isn't Ligeti at his most subtle, and most of the audience were there for the show not the music. Since this production had so much going for it its sheer inventive energy was compensation for the relative lack of musical bite. Nothing to scare away Those Who Fear New Music. This was so good that it will stick in the memory : for once, it will be good to listen to a recording (ideally Salonen) allowing La Fura del Bas's incredible images come to life again in your imagination. You can hear the music again, but you'll never see another production quite like this !

Yet Le Grand Macabre isn't, ultimately, macabre. Death, too, is overturned. Prince G0-Go is arrested because he isn't dead. Piet, Astromodars and Mescalina return to life and carry on as before. Nekrotzar is defeated and doesn't come back. Instead a shrunken puppet version appears, inside the giant woman's stomach. Then the giant's features bloom again, colour returning to her cheeks, and she smiles. She's remarkably realistic now, so it's quite frightening seeing her eyeball to eyeball if you're sitting upstairs. The giant woman's image grew out of a film at the very beginning, where a woman seemed to be dying of a heart attack, which for me made the idea of her "dead" body being subject to indignities rather painful to watch, even though the concept goes bach to Bosch (look at the painting below) . Seeing the actress who plays her in the film taking applause later was reassuring, but begs the question : what shambles of an existence has she returned to? Which is perhaps the point - we can't assume everything's back to normal, whatever normal "is".

Please see the podcasts on the ENO site and the review on Opera Today with production pix. Very fun !
at September 18, 2009