The Sheng and the Shō 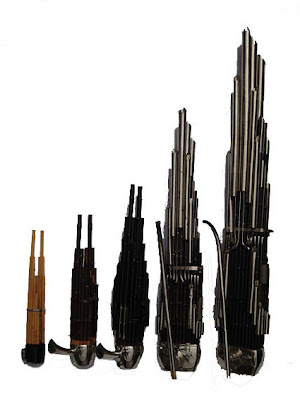 This latest BBC Total Immersion featured Unsuk Chin and her Su for Sheng and Orchestra (conducted by Ilan Volkov, soloist Wu Wei)  Amazing sounds - but how much came from the Sheng's exotic nature as opposed to the music in which it was used? For my review of Wu Weu Sheng at the BBC Proms (Myun Whun Chung please see here)

Shengs go back 3000 years : think circular pan pipes. The performer blows and inhales through a single aperture, a bit like circular breathing on a western wind instrument. Traditionally Chinese music was small scale ensemble, even in public entertainments like opera and ceremonial bands. Shengs were often used as continuo, enhancing voice and other instruments, without overpowering them. Even percussion, the basis of most Chinese music, isn't relentless volume. Not all that much difference after all, between Chinese traditional music and western early music and baroque.

Around 250 years ago in the west, society changed, so music changed too. Thus the growth of large scale orchestras and music for large scale public entertainment. In China, a very similar process took place in the wake of modernization at the end of the 19th century.  Hence the renaissance in Chinese music, and the development of large Chinese instrument orchestras. Just as instruments in the west had to adapt to new conditions, so did those in China.

The "modern" Sheng is much bigger, often 36 pipes as opposed to the traditional 17. Playing so many reeds by fingers alone would be difficult, so modern Shengs are keyed for ease of operation. Range is bigger, volume is bigger, many more musical possibilities. Just as in the west, composers had to write new music for new instrumental and performance styles. There's a whole genre of modern Chinese music that's different from traditional folk idiom, but also from western form. (Please explore this site, it's the only one in English that does both western and Chinese classical music, opera and film)

The odd thing for me hearing Unsuk Chin's Su was how western the instrument sounded. There were long unbroken passages which those new to Sheng would have found remarkable, but overall the music didn't develop the possibilities beyond the initial novelty. The soloist was Wu Wei, described in the notes as "the world's leading avant garde sheng soloist"  He's given the world premieres of more than 150 works including 10 concertos with orchestra. In Su he adapts his techniques to jerky jazz rhythms and other western charms. Wu's playing is assertive and full bodied but I'm not sure how far he's stretched as an artist by this material. Towards the end he duets with a more unsophisticated Sheng, from a recording projected electronically into the hall. Wu's "circular blowing" technique is good, and perhaps the breaks are in the score. I'm really not convinced by the music, though, which is pretty straightforward, with hardly any detectable non western insight. Perhaps it doesn't matter as this is western music and the instrument's origins can be safely  ignored.  But on the other hand, think of what can be done when the istrument's potential is really understood and the music developed round its unique charcateristics.

In 2009 at the Proms (how mainstream can you get?) we heard Tōru Takemitsu's Ceremonial - An Autumn Ode where the Shō was played by Miyumi Miyata. The Shō is Japanese, but it's based almost exactly on the Chinese Sheng, examples of which were sent by the T'ang Imperial dynasty to "civilize" the Japanese vassals. Takemitsu's Ceremonial Ode uses the ethereal sounds of the Shō to create sounds which feel intensely spiritual and primeval. He uses the instrument imaginatively, so it awakes feeling in the listener which can be applied to all manner of ideas. Incredibly sensitive and nuanced.  Miyata then played Toshio Hosokawa’s Cloud and Light. Where Takemitsu orchestrated around the unornamented shō, Hosokawa integrated it more closely with the ensemble. Both Takemitsu and Hosokawa's palette was improved because they could hear the instrument as more than just another tool in the paintbox, but as something fascinating in itself.  I don't mean writing ersatz "orientalism". You could, for example write a concerto for contrabass basson, building on the special nature of the instrument and its connections to other instruments. I think it's even been done but the idea is that the instrument's the star.