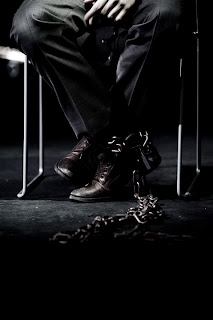 Robert Hugill's When a Man Knows needs to transfer to somewhere higher profile, where it can get the exposure it deserves. This is what good chamber opera should be like. It's modern, yet not so experimental that it can't reach out and draw an audience in. It's compact, too, and travels well.

A man is chained in a corner, with a hood over his head, dehumanized. He's is in a condemned space that will soon be demolished.  Shrill, sharp ostinato blasts of cello (Jonathan Cottle) pierce the darkness of the Bridewell Ttheatre. A bizarrely rhythmic effect, "The dripping of a tap" the chorus sings.  A small ensemble - violin, cello, piano and clarinet. Very long chords on the violin (Marianne Haynes) like an agonized wail that doesn't seem to end. Hugill's music is very tightly written, expressing the claustrophobia and grimness of the scene.

A chorus of two voices, tenor and alto (John Beaumont  and Sarah Barham). They declaim in close harmony. Their voices interlock, functioning as a unit, like the violin and cello do within the ensemble, though to a lesser extent. It's as if they, too, are chained together by fate. They function as Greek chorus, and also intone the stage directions. This works well dramatically as it adds to the sense of surreal alienation that forms the basis of the drama. It's not nearly as powerful as in George Benjamin's Into The Little Hill, but a good solution to the drama..

The manacled man in the hood can't understand why he's in this situation. Is it a charity stunt gone wrong?  Has he been kidnapped for ransom? Dario Dugandzic  doesn't look like a victim in his smart suit and  shoes, so why is he a prisoner? Eventually a silent figure emerges from the darkness. It's his captor, The Woman (Zoe South). She lets him remove his hood, but not the chains round his feet. Now they're almost, but not quite, equal. 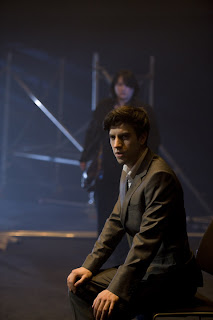 She taunts him to remember where they met. A hotel, a chance encounter. He's forgotten. Then she reveals why she's tracked him down, stolen his medical records, and arranged this devious torture. She's HIV positive and it's his fault. He seems shocked, even though she claims he knew about it before they met.  If he's not released, he might die, he cries. But as she says, they're both doomed, locked together by fate. The significance of the two-voice chorus falls absolutely into place, and to a lesser extent the pairing of violin and cello. South's powerful, rich voice fills the small theatre like she's a Fury from a Greek tragedy. For she is an angel of vengeance punishing The Man so he can't hurt anyone else.

On the other hand, there's no moral absolute here. Dugandzic plays the Man with a surprising degree of sympathy. He's a selfish chancer, yet not a demon. Maybe he was in denial about HIV, as many people are. He's irresponsible, but not actively evil. And The Woman, being an adult, bears some responsibility for having casual, unprotected sex. The play by Alan Richardson, on which Hugill's opera is based, was written in 2003 when the nature of AIDS was well understood, so neither The Man nor The Woman can really pretend they didn't know. For those of us who remember the "Haunted Canyons of the Castro", it is shocking how quickly people forget. Africa and the poorer parts of Asia may be where AIDS is worst now, but if people in the prosperous west don't take care the disease could mutate and return. 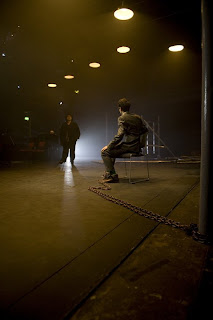 So maybe The Woman is a far more psychotic personality than the play would have. Planning a kidnap and possible murder like this is beyond what any normal person would do, no matter how upset they were. It's one thing to kill by stupidity as The Man does, and quite another to kill in such a sadistic fashion. Perhaps the part of The Woman in the original play is wordy and rambling. Do we really need to hear about the ex-husband ?  Maybe the verbosity is there to shows she's a needy, manipulative whiner. But Hugill's opera is so tautly written and spare that the part might benefit from being reduced to a minimum, just enough to balance The Man. The less The Woman sings, the more sinister she gets, and more dramatic.

What I liked most about Hugill's When a Man Knows is the abstraction and spartan simplicity. This allows for endless possibilities. Will The Woman relent? Will the Man die a horrible slow death? Who really is to blame, if blame is at all relevant. Can, or should people change their nature because something bad might happen? Better an opera that poses questions than one that revamps clichés.

Please read more about Hugill, his background and opera HERE and HERE. The photos are copyright Thomas Bowles. There are 33 of them on his site HERE viewable as a slide show. Look at his main site HERE, he does interesting work. In this opera, Bowles played the clarinet! The ensemble was conducted by David Roblou and the pianist was Richard Black. A FifteenB production, directed by Ian Caddy.
at April 03, 2011