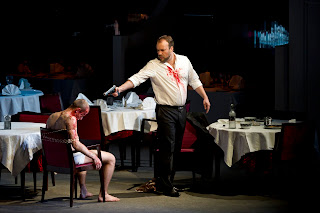 Rimsky-Korsakov's The Tsar's Bride opened at the Royal Opera House, London yesterday. Everyone knows the famous Overture, but few outside Russian-speaking countries know the opera as a whole. Audiences expecting Sheherezade will be in for a shock. The Tsar's Bride is no fairy-tale fantasy. The first image you see is one of a crumpled, semi-naked figure tied to a chair. Grigory Gryaznoy (Johan Reuter), the oprichnik, here seen as a kind of Mafia boss, removes the victim's hood, it shows he's been tortured. They are both in a luxuriously appointed night club, after hours. Waiters mill about, but no-one dares intervene. It's a metaphor for the whole opera, which deals with the vicious abuse of power. Everyone can be bought if the price is right, sings Lyubasha (Ekaterina Gubanova). She knows she's doomed, since Gryaznoy has found another love. When he and his cronies throw a party, they're entertained by lap dancers, desperate young women who sell themselves to survive. 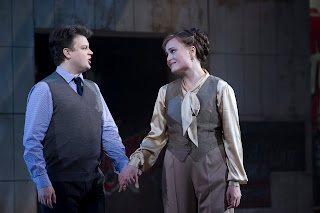 Luxury, contrasted with degradation.  Gryaznoy has been smitten by Marfa (Marina Poplavskaya), the daughter of Vasily Sobakin (Paata Burchuladze). The family is happy as all seems to be going well.They are merchants from Novgorod. They don't normally move in dissolute Court circles, but Marfa is engaged to her childhood sweetheart Ivan Likov (Dmytro Popov), who has returned to her after years in the Tsar's service. Burchuladze, Popov, Poplavskaya and Jurgita Adamonytė (Dunyasha) sing the beautiful Act II Quartet joyfully but it's heartbreaking to know what lies ahead. Rimsky-Korsakov writes relatively little for Marfa to sing until the end, because she's a modest virgin.  In Act II, Poplavskaya's voice created Marfa's  optimism perfectly. She's dressed at first in a version of a man's three-piece suit but that actually emphasizes her innate femininity. She's not self conscious, she's herself. No silly coquettry, but clear toned directness of expression. Poplavskaya can be touchingly tender when she sings of her childhood, but she creates Marfa as a morally upright personality. It works well dramatically. because this honest Marfa has more integrity than anyone else. No wonder Gryzanoy and the Tsar are hypnotized. When a person like that gets destroyed by the mean and venal, it's much more tragic than if it were someone you can't relate to. 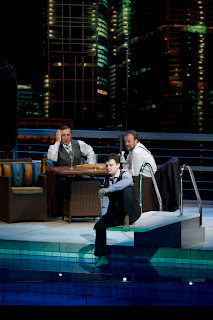 Act II takes place in an oligarch's penthouse, complete with swimming pool and a breathtaking view of the Moscow skyline. New buildings, some still with cranes. New money, ostentatious consumption, greed. The Tsars weren't the only rulers to misuse their authority, as Russian-speaking audiences were only too aware. Gryaznoy plots to win Marfa with a love potion concocted by Bomelius, the sinister German apothecary (Vasily Gorshkov) . What he doesn't know is that Lyubasha has switched the potion for poison. What none of them knows until the last moment is that the Tsar has pulled a switch on them all by deciding, arbitrarily, to marry Marfa himself. The Tsar (in this case Ivan the Terrible) is an invisible presence, all the more menacing because he's unseen and unheard, but destroys everyone's plans. Just as no-one stops Gryzanov, no-one stops the Tsar. 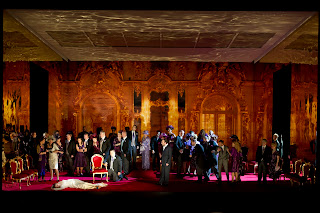 In the Tsar's ornate, golden palace, Marfa, now Tsarina, is dying.  Marina Poplavskaya's  portrayal of Marfa now revealed its true fire and intelligence. Poplavskaya is too good to indulge in a standardized  "mad scene".  She sings so each phrase means something, as if Marfa is trying to process in her mind a source of evil beyond her comprehension. "Where's Likov?", she's thinking, and turns to Gryaznoy mistaking him for the man she's longing for. It's so disturbing that even he is moved. Because Poplavska makes us realize that Marfa is a human being, not a lunatic, she makes us empathize. 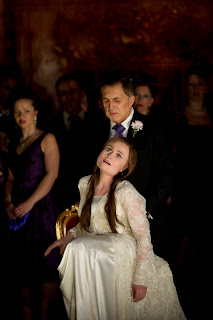 Poplavkaya's Marfa is truly the daughter of a father like Paata Burchuladze's Sobakin. As soon as he begins to sing in Act II, he lifts the ante for the whole cast. His is a real "Russian" bass, with dark gravitas, given extra colour by his extensive experience in Italian repertoire. His Act IV aria, "Zabylasya" compresses a huge emotional range into a few minutes. Sobakin isn't a man of many words, but he's deep. Even when he's not singing, he's a presence, blocked by the director Paul Curran so he's the pivot of proceedings. Just as the Tsar doesn't need to sing to be effective, Burchuladze stands at the centre of ensembles, observing and thinking. When he slits Gryaznoy's thoat, it's so sudden and subtle that you realize that Sobakin has been building up quietly to this final act of desperation.

Ekaterina Guberova's Lyubasha was strongly characterized too. In Act I, she pleases the mobsters by singing her charming folk song, but adds a deliberate air of toughness, which shows how unnatural the situation really is. Perhaps Lyubasha was once like Marfa is now? In the second Act, Lyubasha spies on Marfa and knows she can't compete, Guberova captures her despair and revulsion at the price she must pay to bribe Bomelius. It's only in her final aria that she confronts herself and Gryaznoy. "Straight through the heart" she sings when he stabs her. 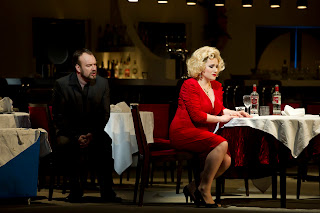 Johan Reuter is a vocally acceptable Gryaznoy. But his even-toned solidity implies that he's fundamentally too nice to portray a villain whose whole life has been spent casually killing and maiming. The part can be created with swaggering sexual menace, but not in this production. By falling for Marfa, Gryaznoy is beginning to see the error of his ways, but characters like that don't normally reform or they don't survive.

Alexander Vinogradov 's Malyuta-Skuratov is more in character, as was Vasily Gorshov's Bomelius, but both have less to sing. Dmytro Popov's Likov is presented well vocally, but perhaps Rimsky-Korsakov realized that the role is no match against Gryaznoy or even, to some extent, to Marfa. Jurgita Adamonytė's Dunyasha was well delivered but the part has "downcast eyes". Even Lyubasha dismisses her as a threat. As always, the chorus of vthe Royal Opera House was excellent, and the dancers were clearly professionally trained. No ordiuinary choristers can do high kicks and contortions like they did. In the pit, Sir Mark Elder conducted well, though not with the verve specialists in this repertoire might attain. Altogether, a very good experience, which deserves to be heard again. Perhaps one day, when London gets the Russian idiom into its heart, The Tsar's Bride will be appreciated for the opera it is.
Full review wth extra photos will appear shortly in Opera Today. Please also see my other posts about this opera, including a short extract from the 1983 Bolshoi film and an interview with Paata Burchuladze.  All photos copyright Bill Cooper, courtesy of Royal Opera House, London. (details embedded)
at April 15, 2011