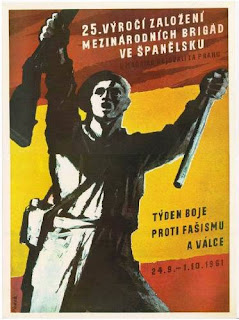 For my review of Britten Ballad of Heroes with Toby Spence at BBC Prom 32 2017 please read here.

So Tony Blair didn't get invited to the Royal wedding? His sycophants whine. But Prince William has been to Afghanistan, he's a serviceman and he knows the real effects of war. So look who does get invited? People whose names aren't headlines, but disabled soldiers, widows, and charities who care for those maimed by Blair's wars brought upon this nation by shameless deceit. William's chosen guests are the real heroes whom we should honour. Blair's presence would be an insult but his followers are too blind to see. William's mother campaigned against landmines. Chances are she'd not have invited Blair either.

So it was an amazing coincidence that last night's Barbican concert, where Ilan Volkov conducted the BBCSO, should include Benjamin Britten's Ballad of Heroes. It commemorates the International Brigades who served in the Spanish Civil War. Men and women joined the International Brigades because they were idealists who were prepared to die if that's what it took to stop fascism. How different things are now when so-called socialists grovel for places at the Royal W! The real conscience of left idealism has effectively been disenfranchised for many years. The big political parties fear change because it threatens their stranglehold.

Britten's Ballad of Heroes was written three years after his seminal Our Hunting Fathers. a much underrated piece whose radicalism still isn't appreciated. This time the tenor is surrounded by a choir, representing the massed voices of the dead and suffering.  Offstage trumpet : a reference to distant conflicts as well as to the Christian idea of the last trumpet, for which you don't need to be a believer to acess. Alarums and whips of clarinet, marching ostinato in the orchestra and turbulence in the choral writing. "A world of horror!" Then suddenly the tenor emerges, uncovered.

"....and the guns can be heard across the hills like wa-a-aves at night". A distinctively Britten flourish.  Later there are huge leaps within phrases in the vocal line, which Toby Spence negotiates well. The orchestra comments, like a response in the sermon referred to in the text. This time the trumpet call is sour and distorted - a precursor of the horn in the Serenade for tenor, horn and strings. Though it's not a masterpiece, Ballad of Heroes is dramatic and would work well in public spaces. Like Westminster Abbey.

The text is from W H Auden and Randall Swingler, a communist poet of the 1930's  HERE is a link to another poem, much better and possibly all Auden, (though it's not, as the site suggests, the text used in this setting).  In Ballad for Heroes, Britten used lines from both poets. Since Auden's great poet and Swingler isn't, the joins are clear.


The Spanish Civil War inspired so many artists and writers, from Picasso, to Hemingway and myriad others less famous. Where are the artists now, in our even more polarized times?  Have they all been lulled into complicity?  Britten's Ballad of Heroes is a million miles from Hanns Eisler and Ernst Busch (who actually took part) but Britten cared enough to make a statement.