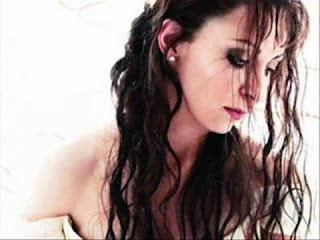 Debussy Pelléas et Mélisande is an otherworldy symbolist dream.  Louis Langrée, Natalie Dessay, Laurent Naouri, Simon Keenlyside and the Orchestre de Paris at the Barbican, London, created the opera as perhaps it should be, an extended symphonic reverie with voices. Four hours, short break: no mercy to the faint of heart.

Although Pelléas et Mélisande is dramatic enough for an opera, concert performances throw emphasis on the orchestral structure.  The dense forest in Act One isn't physical. Seductive strings, but chilling winds, in every sense.  It's a psychological jungle into which Golaud has strayed. Mélisande's first words are a warning. "Ne me touchez pas"  Natalie Dessay's Mélisande is much more than a pale mirror for Golaud's fantasies. The deliberate sharpness in Dessay's singing is deeply disturbing because it barely suppresses the innate sensuality that lies beneath. Later, the tenderness in Dessay's portrayal will reveal itself, but she establishes the essence of the mystery straight away. Whoever Mélisande might be, she's an elemental spirit, and not benign.

Dessay's singing isn't flashy but emotionally true. It's significant that she spends time with Pelléas by the deep pond whose waters can restore sight to the blind.  Dessay's voice becomes flirtatious, as if she instinctively scents Pelléas as prey. When the pair enter the underground grotto, it could be a reprise of Golaud lost in the forest, but this time Mélisande has changed, as the lightness entering Dessay's voice indicates. The part doesn't call for extreme range, but is expressed by fine nuance. In the tower room, Pelléas and Mélisande don't need to talk, or even close their eyes. There's more to communication than words, or kisses for that matter. Golaud dismissdes the pair as "children" but children sometimes know things beyond the ken of self-conscious, literal adults.  Thus no coy sentimenatlity in Dessay's portrayal, which is direct and lucidly expressed. Although there are so many mysteries in Mélisande's past,  she exists on a completely different plane to ordinary mortals, and is utterly true to herself. 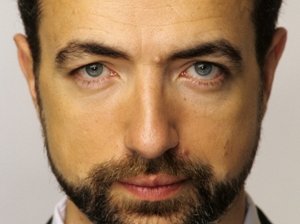 Laurent Naouri's Golaud is equally well thought through. Sometimes Golaud's depicted as a brute, to emphasize the contrast between the brothers, but in many ways, they are halves of  the same personality. Naouri is forceful, but refined, a caring, decent man, captured by forces way beyond his control. When Naouri sings La nuit sera très moire et très froide, his voice opens outwards, creating a sheen of sensitivity.  This is the "Pelléas" aspect of Golaud's personality. Perhaps he was once like his younger brother though, as Mélisande notes, he's turned grey before his time. It's the Allemonde effect, established long before we even reach the palace. Naouri's Golaud develops as the opera develops, which is perceptive. In the Act III  underground scene, the darkness in Naouri's voice rises, barely stifled. If Yniold wasn't with his father outside the tower, who knows how Golaud might have reacted? In Act V, Naouri expresses the pent-up hysteria in Golaud's anguish. He's torn apart by guilt. As Mélisande talks of death, his cry Toi, toi, et moi, moi aussi, après toi! comes from a dark place too horrible to contemplate. 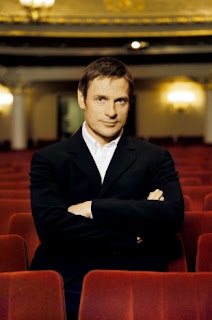 Dessay and Naouri are stalwarts of the French tradition, but Simon Keenlyside (photo Uwe Arens) fits in extremely well, for he has taken the role of Pelléas so many times, it's almost his trademark. His diction's perfect, capturing the Gallic twists like a native speaker. Nice, clean and suitably charming. If this performance was less complex than his creation of the part in Berlin five years ago, that's because his Berlin performance was exceptional, not at all easy to match.

In live performance a singer should be judged in context, not pinned down like a lab specirmen. In the context of this performance, Keenlyside concentrated on the three-way relationship between Pelléas, Mélisande and Golaud, which is much more central to the psychological truth in the opera than a straightforward tale of thwarted love.  For this reason, I appreciated Keenlyside's performance a great deal because he let the opera take precedence over the role. If Pelléas et Mélisande is a psychodrama of the subconcious, as Maetrelinck intuirted, the emphasis is on Mélisande and the effect she has on those around her. Pelléas and Golaud are after all brothers and close, though they have different fathers.  Too much emphasis on Pelléas distorts the balance. Incidentally, Keenlyside was wearing an elbow brace and careful not to move his arm.  He has a long history of "battle injuries" both on stage and off. I hope he'll mend soon.

Alain Vernhes was an excellent, sympathetic Arkel. His voice is firm enough to sound youthful and virile, which is true to the opera, since Arkel has many important things to say. Depicting him as a crumbling Titurel is a misreading of the role.  Marie-Nicole Lemieux was a feisty, energetic Geneviève, not completely cowed by the anomie that is Allemonde. Golaud and Pelléas may get  their strength from her. Khatouna Gadelia sang Yniold and Nahuel di Pierro sang the Shepherd and the Doctor. There werre occasional slips even in the main parts, but that's what live performance is. It's spontaneous, things don't operate like clockwork. Stay at home if you demand machine-like delivery. That's not what music is, anyway. Overall, this was very high calibre singing indeed, and a joy to the ears.

But it was the orchestra that really made this Pelléas et Mélisande come alive. for Debussy isn't writing an opera so much as a symphonic reverie with voices. Louis Langrée and the Orchestre de Paris make a superb case for concert performance.  Debussy didn't write those extensive interludes for nothing. Above all, he was an orchestralist for whom abstract music could be even more expressive than words. The vocal texts undulate within a relatively simple range, much like spoken language, but the orchestra sings, rumbles, screams, comments and dreams.  The Orchestre de Paris is wonderfully lucid, as direct as Mélisande herself, asnd as capable of mystery. Indeed, because Langrée gets such clarity, the psychological ambiguities are thrown into even higher focus.

Debussy's writing is strikingly lucid.  Although music without text is abstract, in many ways Pelléas et Mélisande is an abstract opera dealing with concepts words cannot express. Throughout this opera contrasting images, extremes of light and darkness, debilitating heat and frigidity, oppressive entrapment and escape. Starving peasants encroach on the palace. which is cut off from the outside world by encircling forests. Allemond  ("all the world") is imploding on itself. Some scenes are almost impossible to stage literally, such as when Mélisande lets down her golden hair, presumably so long and so strong that Pelléas can climb up on her tresses  and tie strands to trees without doing damage. The symbolism of hair and the obvious phallic reference that is the tower indicate what may be at the heart of this opera, but there are many other important threads, such as truth and  dishonesty ("I only lie to my husband" says Mélisande). You could kill this opera by literal staging, though a well made film might catch its essence. Langrée and the Orchestre de Paris played with such elegance and poise that they illustrate, through their playing, the fundamerntal psychic imbalance that is at the heart of this highly conceptual drama.

I felt so emotionally engaged that I was shattered. But what do I know? At the end, as soon as Langrée let his hand drop, there was a loud and very deliberate boo from someone in the audience. Perhaps the kind of clever clot who thinks it shows how superior he was. Or the kind of person who gets kicks from spoiling things for everyone else. Booers are boors, make no mistake.

For a moment, the orchestra looked shocked but soon regained their aplomb. It's London that should be ashamed, not Paris. Those who stayed for the applause had an extra bonus. April 19th is Natalie Dessay's birthday and the band struck up "Happy Birthday". Those who could sing sang along, too, including a large French family sitting near me.  She beamed, and she deserved it.