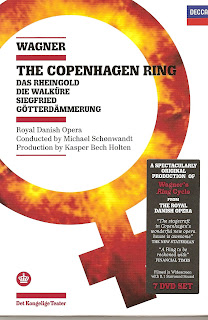 Does Kaspar Bech Holten's Copenhagen Ring tell us anything of what he'll bring to the Royal Opera House when he takes over Elaine Padmore's role in 2012? Maybe, but maybe not. This famed Ring put Copenhagen on the opera map,  and was received with great acclaim. It's not a cop-out like the Schenk/Levine production which even the Met was forced to retire. Neither is it so innovative that it might disturb mainstream audiences. Musically it's pretty good, not over the top or staid. One of the worries about Holten's appointment is that he doesn't have widespread international experience, but if this is what he gets from a mainly Scandinavian cast, it's not unpromising. This Wotan is Johan Reuter's performance of a lifetime. Maybe there are less divas in Denmark, but Holten won't be the only one at the helm in London.

Because this Ring was closely connected to the 2005 opening of the new Copenhagen Opera House, the building features prominently in the production. It must have been fun for the audience! For those of us not familiar with the city, there are still enough in-jokes to keep us amused, like the Norns surfacing as audience members in the stalls, complete with programmes and opera glasses.  Cue for a Ring that's deliberately non-mythic, but instead focussed on domestic realism. Holten even casts a genuine giant for Fasolt (who sings and acts superbly). Real wood dove, too, and it flies.

The Gods and their pawns aren't divine but human - almost embarrassingly human sometimes. Erda is semi-comatose in bed. Wotan/The Wanderer kisses her dutifully but he's clearly scared. Is she his Elderly Mother who will tell him off?  The whole Ring saga is told as if it were Brünnhilde's memory, as she's seen rummaging through old books while the Rheingold theme is reprised in Götterdämmerung. Strictly speaking, it's not as if she didn't already know, but it affirms her resolve to return the Ring to whom it belongs.

Thus the story progresses from 1920's Flapper to post WW2 austerity to the Swinging 60's where rebel teenager Siegfried decorates his room with sitar, guitar and hippy wall hangings. The kitchen in which Mime cooks up his spells is Danish Modern chic - pine, red and white kitchenware. Generational change is a feature of the Ring, so in principle it's not inappropriate to think of the Ring in compressed 20th century terms.

Humour, too. Fafner sits in a wheelchair bossing Fasolt about. Capitalist pig! Alberich scrawls his crazy theories on a blackboard. Hagen wipes the board clean, leaving for last a double helix : is DNA destiny? Can Hagen really get his Dad off his back by stabbing him?  Siegfried leaves the forest for married life in a room full of pot plants, where the Wood Dove's confined in a tiny cage. Now wonder he wants to escape!  While all these vignettes have wider meaning, humour isn't Wagner's forte. It's almost impossible to imagine Brünnhilde fussing about with a watering can. She may no longer be a  Walküre but no way will she ever be a bimbo.

De-mythologizing has its place, since The Ring is very much a universal story of strong personalities caught up in a web of moral compromise. That's why some thoughtful commentators have suggested the Copenhagen Ring as a good introduction to the cycle, so newcomers get used to it as drama before they go on to the more complex metaphysics. Better this than the Met Ring which substitued costumes for ideas and froze Wagner interpretation where Cosima might have wanted. For me, the best balance on film is probably Audi's Amsterdam Ring. I've seen and loved Sawallisch/Lenhoff but it's not on DVD.

There are some excellent moments in the Copenhagen Ring. Wotan and Loge's journey into Nebelheim  for example, and Wotan's truly horrific temper tantrum as he tears Alberich's arm off to get the Ring (a bracelet here, easier to see on stage). Loge cringes in shock. Even better is the Rock under which Fasolt-made-monster stands guard. Thick, black tentacles reach underground to his lair.  The final Immolation comes complete with real flames. Hagen's arm burns as he lunges at the Ring. Live, this must have been quite an experience.

Much less interesting is the emphasis on old age. Everyone grows old here, even the Gods. Wotan changes from youthful Reuter to James Johnson's Wanderer (without explanation).There is also something unpleasant about depicting decrepitude where it isn't really relevant. Where age versus youth does matter is the Brünnhilde/Siegfried relationship. Iréne Theorin was in her 40's when this was made but looks 25 years older. Sings vigorously, though. As Siegfried, Stig Andersen's face is painted white and looks 50. Inexplicably, in this Ring Brünnhilde is hugely pregnant which makes her aged apppearance truly unnatural.  Brünnhilde pregnant?  In the publicity material she cradles an infant. That's so not Wagner it doesn't bear thinking about. So maybe we can expect something controversial from Holten after all.
at April 04, 2011