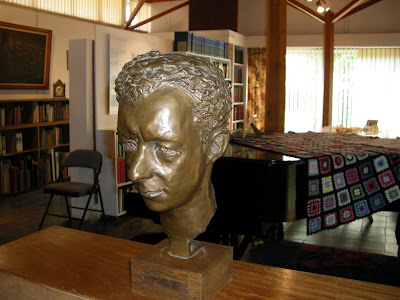 New Benjamin Britten discovery! The song goes "Hop, happy bunnies, we, one, two" Suddenly the voice leaps an octave and squeaks "three!" CUTE, but not bad considering he was about 7 when he wrote it. You can hear the whole song at an exhibition at The Red House, Aldeburgh, where Britten and Pears lived from 1957 until they died. Over the past few years, Britten's childhood has been exhaustively documented. The exhibition has items never before displayed. There's also a series of concerts through the summer.

Composer juvenilia can be embarrassing. Most composers lose theirs, or throw them out, but Britten kept his all his life, scrupulously organized in an eerily adult manner. He wrote no fewer than 800 pieces before the age of 18, many formally copied out with proper title pages marked "E B Britten". In Britten's case, juvenilia matters. The child is father of the man. All his life he was fixated on youth, on innocence corrupted, so it's interesting to find out what Britten was like when he himself was an innocent. CLICK on the photos to enlarge for detail. 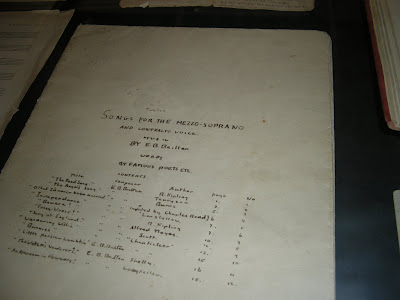 Many handwritten scores can be seen: lots of bright kids live in this kind of fantasy world where they illustrate and "publish" series of books and pictures. It's a kind of role play. In Britten's case, it reinforced his sense of being different.

"I feel very small, and very strange", he wrote home from boarding school. It must have been strange indeed to come from a home where things revolved around him, pampered by his adoring mother, and suddenly be forced to live with ordinary boys.

What the boys thought of him isn't known, which is odd since he was to become so famous in their lifetimes. But some of the teachers seem to have been unsettled by him. Were they jealous, did his abilities make them feel inadequate? To them, Britten may not have seemed quite as vulnerable as he really was. For Britten, school was a tough test, where he proved himself. But as he was later to confide to a friend, it was when he discovered sex, by force. No conclusive proof of course, but it makes you reflect on the many things that made Britten the person he was. He learned early to stand up for himself, whatever the ways of the world. It also sheds light on that strange emotional reticence that many find offputting in his music but is so integral to his expression.


The years of work that went into cataloguing Britten's boyhood also shed light on teaching methods of the time. One of the exhibits is a board with stave lines on which kids can move time signatures and clefs, like a board game. It makes abstract ideas concrete and shows how components can be moved around. Because Britten's youth is so well documented, the project's also useful as source material for the study of childhood. 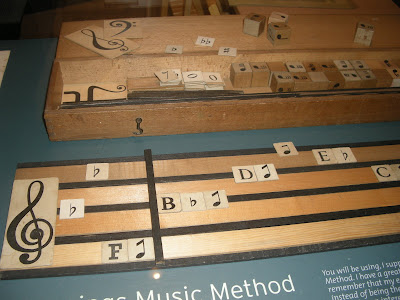 The Red House (up a driveway past a golf course) also houses the Britten-Pears Library (books and scores), in what was once their living room. You can see Britten's piano, facing the garden, covered with a rather well crocheted afghan rug. Opposite are the chairs where he and Pears would have sat. Through the house are pictures and furniture of their time. They lived as modernists in mid-century European style. No kitsch chintz. I spent ages browsing their books, some signed with their names, most with a fancy Ex Libris plate. They certainly were up to date in their reading - first editions of books then published. Striking was how much they read on the baroque. Some rare books, in German as well as English. 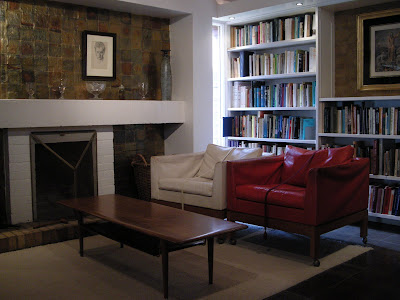 The exhibition runs til 11 December, and concerts run through August 2009. It's a good opportunity to visit Aldeburgh when it's relatively quiet out of Festival season. The town is becoming a foodie paradise -- genuine home-cooked treats and local produce. Shop at Salters, the family-run local butcher where you can buy quiches on bases which the cook's kids have cut out from cardboard and covered with foil. Delicious, and fresh. Fantastic meat, cheese, apple juice and picnic food. It is wonderful to get away from mass-produced chain stores. The locals get excited because there's a supermarket out of town, but visitors thank God that Aldeburgh is a time warp. People wait all year to stock up at the local pharmacist, Shooters, which carries luxury brands among the quaint beach toys. Visit Butchers, which must be the last Old Worlde department store in Britain, where the shop fittings are Victorian and you buy clothes from a staffed counter. Since they stock modern brands like Barbour, it's real shopping not fantasy. Much more fun than self-conscious arty boutiques. Support local independent business, buy a years' supply of socks, shirts, coats.
For more on the Britten juvenilia catalogue, please see HERE
at July 28, 2009