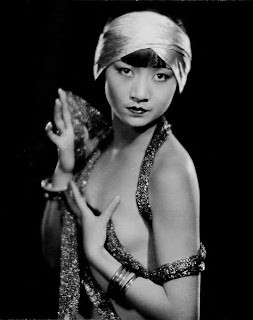 A reader asked, "What's your take on Piccadilly, Anna May Wong's 1929 film?" Anna May Wong (pictured left) is so dazzling that she mesmerizes. It's almost impossible to see the movie without being hypnotized by her powerful presence. But there's more to the film, and you really have to be fully bi-cultrural to connect to the deeper cultural clues.

The film starts off as routine 1920's glamour. In the Piccadilly nightclub, posh patrons carouse, spending money while watching a dancer, all furs, feather and fluff. Downstairs, in the scullery, the staff are distracted by a girl who dances while washing dishes. Note, it's white working women who love her for what she is, regardless of her race and beauty. 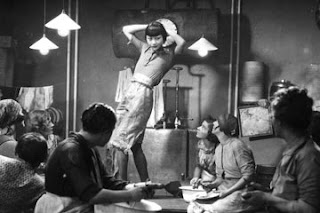 Her name is Shosho, which isn't Chinese, but this was a movie made for audiences who didn't know any difference. When she's not working Shosho wears standard flapper outfits, cloche hats, striped tops etc. just like any other British girl (if they look like supermodels). She eats steak and mash in a typical London greasy spoon, (like the retro Quality Chop House on Farringdon Road, only the real 1920's version). Boyfriend, called Jim, is Chinese but also acculturates white, as many did even then. He wears a western cloth cap and could be any working-class Londoner.

Nightclub boss hires Shosho to dance in the nightclub. She drives a hard bargain. She has artistic control! "expensive costume or I don't dance". They head off to a seamy dive in the slums that sells "oriental", but it's a howler if you know oriental. Not Chinese at all, but fake samurai outfits and Japanese celluloid statues. Lots of other clues, easily missed, like Anna May Wong's messy, unpracticed handwriting when she writes Chinese.. Then the Total Cultural Mayhem of her dance. Apparently she designed this scene herself, based on drawings of Thai dancers, completely different to Chinese dancers. Nudity, moreover, is a western concept, completely unacceptable to Chinese sensibilities in those days.

Poor Jim has to dress up like a tourist souvenir and play a Japanese samisen, seated between two candles, which in Chinese symbolize funerals. Maybe, just maybe, all this kitsch is intentional, the implication being that all orientals look the same to whites. 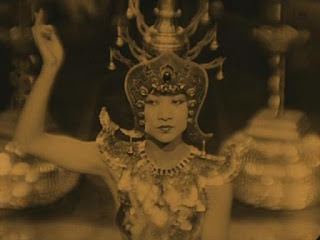 Shosho takes nightclub owner to a lowlife pub. "This is MY Piccadilly", she says. In the club are all races, having fun until someone objects to a drunk white woman (very well acted) dancing with a black guy.

Shosho is a huge success in the nightclub, grabs headlines in the newspapers and snares the boss. They go to her home, which is approached again through slum alleys but opens out to a huge, opulent art deco palace, cluttered with "oriental antiques". Non-Chinese audiences would think "Wow!". Chinese audiences would be appalled. To Chinese, seeing Buddhas in this ludicrous context is like Catholics seeing Madonnas and crucifixes tarted up in a tacky brothel. It's not unlike the white dancer's house, which is also ultra kitsch, but without "cultural sins", only sins of taste. Shosho happens to have a dagger on the wall for decoration (again a Japanese thing, very un-Chinese). After all, "orientals" are dangerous - look at Shosho's nails, trimmed to a sharp point.

Shosho is seen to attack the white dancer, who turns up in this den, but she's shot dead herself. Nightclub owner is put on trial. But of course he's innocent and the white dancer, too. The killer is Jim, the "Chinaman".What do you expect from "Asiatics", the film seems to imply.

(1929) has been re-released by the BFI, because it is an important film, and extremely well made. It does annoy real Chinese audiences because it depicts all "orientals" as being the same, which they are not, and plays up the "inscrutable" caricature. The killer "has" to be Chinese, for example.  Indeed, when I first saw the film, I wasn't sure whether it was pro or anti Chinese, racist or anti-racist. But in 1929, the film makers didn't have much choice. At least Piccadilly manages to expose racial prejudice, even if it does end up playing along with stereotypes.  Anything more direct would have been dangerous. Yet on the other hand, it's a fine line between exposing stereotype and reinforcing it.

But still, I see this film as a China Chinese, so can't help but wince with distaste.  To me and my friends, AMW was quite unknown until we came to the west. Subsequently, I've been rerading up on her reception when she visited Shanghai in the 30's.The Chinese film industry even then was huge, vibrant and progressive but AMW didn't fit in (she was miles taller than anyone else). The industry had many American-borns involved, as directors and producers as well as actors, so it's not true that she was rejected for being fundamentally foreign. Ruan Lingyu (a Cantonese whose Mandarin was lousy) was compared to Marlene Dietrich. So why did AMW, who worked with Dietrich, fail in China? Perhaps she was too closely identified with "inscrutable stereotypes". Fundamentally she was more foreign than Chinese, which is perhaps why she's easier to accept from a non-Chinese perspective. In contrast, Warner Oland, who waqs white, was loved in China because his Charlie Chan depicted Chinese in a funny, but non-racist way.

Please see my earlier post Piccadilly Revisted, about Anna May Wong as an icon for modern overseas Chinese.  That's understandable as for many, they've grown up in western culture and need an image of a Chinese to admire. In practice, though, there are many, many more iconic Chinese role models. Indeed, Chinese cinema is extrremely important in that it was part of Chinese modernization and 20th Century culture.  So I hope that Chinese raised outside Chinese culture, and non Chinese too   for that matter, will strive to learn more about Chinese cinema and the way it shaped modern Chinese values. Unfortunately, there's not much written in English about Chinese film to explain the symbolism and context. So on this blog, I try to write about Chinese film. Even if you don't speak Chinese, I try and do enough that films can be underrstood, a bit.  Please look under the label "Chinese movies" for more.

Even in Hollywod, there were Chinese and Japanese (Sessue Hayakawa) who bucked prevalent racism and didn't sell out. Or Keye Luke, an American who found his Chinese roots. Lots of Chinese cinematographers, like James Wong Howe. Lots of interaction between Chineser movie people in China and in the US. It's a huge field, which reflects the diaspora. Eventually all the world will be multi culture, so we need to understand.

There is a FULL DOWNLOAD of AMW first silent movie, which is far less racially compromised, despite being so early. See short clip HERE which links to full download. I've also written lots on film and cross cultural issues.
at April 11, 2010