Who is Elisabeth in Tannhäuser? 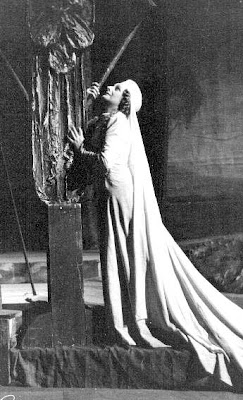 Who is Elisabeth in Wagner Tannhäuser? Is she really the Virgin Mary ? The knights at Wartburg revere her but it would be blasphemous to suggest she was their deity, even if she fulfils the role of alter-ego Venus. She doesn't return their awe. When Tannhäuser runs off in a huff, she withdraws from the company. Not for her those pose-y songfests. Like Tannhäuser, she's an individualist, not one of the conforming crowd.

As soon as Tannhäuser returns from Venusberg, Elisabeth knows he's changed, and for the better even though she doesn't know why.  Specifically, she rejects knightly tradition and wants what Tannhäuser's offering, even though he's still in  a dream.

(Emotions, which I have never experienced, needs I never knew). Elisabeth doesn't want to be a Virgin! The photo above might hint that some Elisabeths of the past had an intuitive idea what Elisabeth was going on about (The photo is Irma de Keukelaire in Antwerp, 1943)  I've seen a photo of Emmy Destin dressed up as a nun for the role, complete with massive rosary, but can't find it. A nun in love with a mortal man? However spritual Elisabeth may be she's not quite reached that level of sublimation.

Wagner is quite clear that  Tannhäuser and Elisabeth have an intense love for each other, way beyond the narrow bounds of convention. When Tannhäuser seeks penitence, he wants to experience pain greater than other pilgrims. Similarly, Elisabeth wants extreme sacrifice. If indeed God were truly merciful, might He not forgive? It's his job, after all. (The Pope in this opera is Reformation caricature). Is Elisabeth then a prototype Isolde, seeking transfiguration through death? Or a Brünnhilde? Either way, Elisabeth is certainly not a passive, wimpy personality. She has the same inner wildness that Tannhäuser has, which is why they are soulmates, who stand out from the crowd.

Wolfram's ideal love is the ultimate in beautiful but he cannot bear the idea of the "pure stream" being sullied by emotional engagement. To paraphrase Tannhäuser, auto-eroticism is sterile. "Du hast die Liebe arg entstellt; wenn du in solchem Schmachten bangest, versiegte wahrlich wohl die Welt!". Real beauty comes from involvement and connection. Venusberg was a bad place but at least people transacted.

However Elisaberth is performed, somwhere along the line the singer and those around her must think about who Elisabeth is and why she responds in such extreme ways to Tannhäuser. Performances can't really be properly assessed out of context. In the Tim Albery production at the Royal Opera House I like Eva-Maria Westbroek's Elisabeth because she was untamed and passionate. Unfortunately the director and designers didn't understand.
at December 29, 2010

Email ThisBlogThis!Share to TwitterShare to FacebookShare to Pinterest
Labels: WagnerTannhäuser