Britten and Pears in Hong Kong 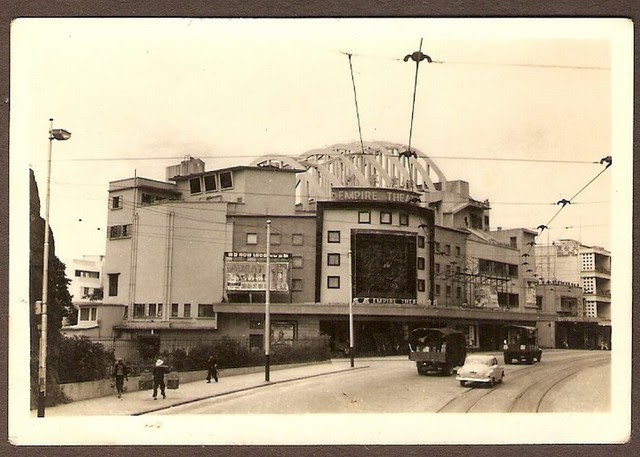 The Empire Theatre in Hong Kong, where Benjamin Britten and Peter Pears did a gig on 3rd February 1956. The programme included songs by Dowland, Purcell and Schubert, and Britten's Seven Sonnets of Michelangelo, plus Britten's folk song arrangements.  On the 6th, the Governor of Hong Kong, Sir Alexander Grantham, invited Britten and his party to,lunch at Government House. In the afternoon, Britten and Pears visited the studios of Radio Hong Kong, where they were inteviewed and gave a short recital,which was recorded, and is available below.

On the 7th February, they gave another recital featuring Schumann Dichterliebe "in the private house of a curious man" as Britten wrote the following day to a friend. Britten's friend and travel companion, Prince Ludwig of Hesse, wrote about the concert "at the unpleasant finance manager's home. The clever and really very nice governor and his petite wife were also there. One cannot get rid of the feeling that the sinister nabob had harnessed famous English artists and  foreign royalty in order to lure the important governor into his den"  Somewhat bitchy, perhaps ?  Grantham was not a particularly pleasant man, but the visitors weren't in a position to judge the local situation.  There's no indication who the"finance manager" was, whether he was a government official, a businessman or even British.  That might be relevant.  Since Britten and his party spent much of their time in Hong Kong in the company of the governor, it's possible that they would have been influenced by his views.  Colonial society was, to put it mildly, "stratified".

The Empire Theatre, built in 1952, was built to state of the art standards, with  huge steel buttresses, (see pic above) and decorated in Shanghai art deco style, with important Shanghai architects and artists (the mural is amazing)  The owner was Harry Odell, the local impressario, who had himself come from Shanghai.  In 1957, the Empire was closed and re-opened as the State Theatre which became a Hong Kong landmark.  Recently, it was shortlisted as a heritage site for preservation.

Please also see my piece on Britten and Pears in Macau