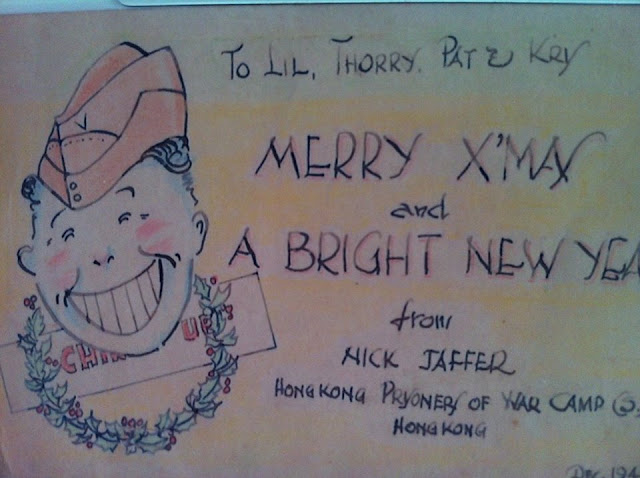 Utterly unique - a Christmas card drawn in the Prisoner of War Camp in Sham Shui Po, during the Japanese occupation of Hong Kong, sent to some of his family. The artist is Nick Jaffer,  Private, Service number 3177, in the Hong Kong Volunteer Defence Corps, seeing action in Wong Nei Chong Gap, where 60% of some units were wounded or killed, including his brother-in-law, William Markham.  In 1943, he was shipped to Japan with many other prisoners and worked in a coal mine in Sendai.  He was born in Shanghai on 29th October 1908 to Abdul Hamoned Jaffer and Kulsoom Jaffer, who were"Chinese Parsees", Parsis who had been settled in China for many generations.  In the POW records held by the Commonwealth War Graves Commission, he's listed as "Persian". This proved to be an advantage as the Japanese considered him technically Indian and gave his wife Indian rations, which were more generous than for Chinese people. Since she didn't eat Indian food, she swapped ghee and spices for extra rice.  His father died before the war and his mother died in the Red Cross Rosary Hill Camp for dependents of HKVDC POWs, during the occupation.  But at least she saw her grandson, born in 1942.  Prewar, he'd worked for Thomas De La Rue (security printers) and after the war worked for NCR in Singapore, when they still made cash registers.  He was a dashing man, very debonair and creative. That's why he was a Camp artist, constantly drawing, painting, and taking part in the social activities the prisoners organised to keep up their spirits.  The drawing above looks just like him ! He accumulated a huge cache of drawings, which were borrowed by someone in the 1960's and never retuned, which almost broke his heart.  He loved travelling, well into later life, and died in his 90's.
at December 24, 2018