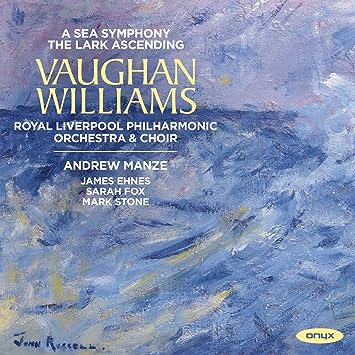 Andrew Manze Ralph Vaughan Williams series with the Royal Liverpool Philharmonic Orchestra and choir for Onyx continues with A Sea Symphony (soloists Sarah Fox and Mark Stone) and The Lark Ascending (soloist James Ehnes).  Previous releases (Symphonies 2 and 8 in 2016,  3 and 4 in 2017, and 5 & 6 earlier in 2018) should leave listeners in no doubt that this is a significant series. Here we start at the beginning, with what is effectively the first symphony, premiered in 1910.  Given that Martyn Brabbins recorded A Sea Symphony with the BBC Symphony Orchestra for Hyperion recently, (please read more here) one might ask whether one should choose between the two. But such comparisons are meaningless: simple either/or judgements don't develop listening skills.  Every good performance has something of merit, whatever the pros or con.  Manze has by far the stronger soloists, though on balance, Brabbins offers more in terms of orchestra and chorus. We need them both. Be glad that we live in an age where we get variety !

If this A Sea Symphony doesn't begin with quite the dramatic spectacle it might, though the timpani roll and trumpets blaze, Manze compensates by emphasizing the undercurrents : the strings surge, suggesting the undertow from which the sprightly woodwinds emerge. This highlights the  "A Song for All Seas, All Ships". Mark Stone's rich deep baritone rings out. A truly vigorous  "Today a brief rude recitative" : the sailor here is a distinctive individual with the confidence to confront whatever may lie ahead, particularly appropriate in the context of the composer's career at that point.   Stone  captures the shanty rhythm in the line "a chant for the sailors of all nations, Fitful, like a surge".  This creates contrast with the soprano (Sarah Fox) and her more esoteric text, and the refined choral section that follows, so when the baritone returns, the chorale-like structure in the movement is revealed. If anything, Stone is even more impressive in the second movement, "On the beach, at night, alone" where subtle nuance is of the essence. Manze's restraint in the second movement throws the Scherzo into high relief : pounding figures, wild, scurrying lines, swirling strings . While Brabbins brings out the colours of Debussy and Ravel in Vaughan Williams,  Manze is rewarding in the Elgarian moments,  especially in the final movement, The Explorers, which has elements of the transfiguration in The Dream of Gerontius.

The first part of the final movement is reverential, but as the pace speeds up, it comes thrillingly to life. "Oh we could wait no longer! " sings Stone. Stone and Fox complement each other : very well-balanced and articulate, harps, winds and violin adding further illumination.  When Stone sings "O soul thou pleasest me", the warmth in  his tone suggests genuine delight.  This is significant, given that the baritone and soprano may represent earthly and spirtual forces at last united in harmony.  Thus the outburst of ecstasy on "O Thou transcendant".  While A Sea Symphony is secular, it may stem from traditions older and deeper than the poetry of Walt Whitman.  One wonders what Vaughan Williams might have done with Solomon's Song of Songs as a work for solo voices.

Combining A Sea Symphony and The Lark Ascending on one disc makes musical sense, the violin (soloist James Ehnes) taking up where the violin left off in A Sea Symphony.  In marketing terms, the sheer popularity of The Lark Ascending would  be persuasive, especially for those relatively new to the works.Brabbins’s   pairing of A Sea Symphony with the more unusual  Darest thou now, O soul, will appeal to listeners with more advanced musical interests.  Though The Lark Ascending is so beautiful that it's almost impossible to spoil, truly exceptional performances are not that easy to come by.  Ehnes, Manze and the Royal Liverpool Philharmonic Orchestra give a very good and satisying account.
at December 18, 2018

"One wonders what Vaughan Williams might have done with Solomon's Song of Songs."

So true ! where the rapture goes beyond words and persons !