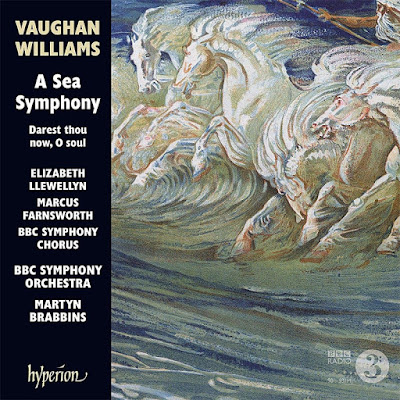 From Hyperion, an excellent new Ralph Vaughan Williams A Sea Symphony with Martyn Brabbins conducting the BBC Symphony Orchestra and BBC Symphony Chorus,  Elizabeth Llewellyn and Marcus Farnsworth soloists. This follows on from Brabbins’s highly acclaimed Vaughan Williams Symphony no 2 "London" in the rarely heard 1920 version. Although Brabbins has not hitherto recorded much Vaughan Williams, he is a superlative conductor of British music and of 20th century British music in particular, so the prospect of a new Hyperion series with Brabbins is intriguing.

The brass fanfare sparkles, strong and bright, rather than brassy,  introducing the first line "Behold, the Sea! ". In many ways,  this symphony is a secular hymn to the sea and what it might represent, so the voice parts are integral to meaning. For a moment the orchestra sings on its own but the voices rise upon the crest, chorus and orchestra surging forwards together. A roll of timpani, and again the anthem "Behold the Sea!" repeated wave after wave.  The tide fades, introducing a new theme highlighted by rhythms that suggest shanty song. Hence the interplay between the first soloist and the chorus, "a chant for the sailors of all nations, Fitful, like a surge".  This call and response relationship also suggests sacred song.  The flags flying here include a special one "for the soul of man"......a spiritual woven signal for all nations, emblem of man elate above death, Token of all brave captains and all intrepid sailors and mates". Though the influence of Debussy and Ravel is significant, the Sea Symphony is very much part of the English choral tradition, albeit in very sophisticated form.  After a brief lull, the music surges forth again, underlined by organ. The baritone returns, singing of the "pennant universal", the chorus and soprano repeating the words in concurrence.  Then, as so often in chorale,  the first verse returns, the soprano at first on her own, the theme elaborated by the baritone, chorus and orchestra together.

The second movement is introduced by mysterious low harmonies, setting the mood "On the beach at night alone".  Here, the organ is particularly resonant, the brass and low timbred winds calling out as if in hymnal.  At first the baritone is alone, but gradually joined by small than full chorus.  "All nations, all identities......This vast similitude spans them".  The voices and orchestra repeat the themes, like waves, rising and falling in volume and force.  Beautifully judged orchestral playing, the solo instruments heard clearly, before blending back into the whole, rather like stars in a night sky.   The fanfare in the scherzo movement was more tumultuous than the fanfare at the very start, for it describes the churning of waves "in the wake of the sea-ship after she passes" - wild but not "motley" given the precise definition in the music, which Brabbins kept sharply focused.

If A Sea Symphony is a journey. it is one which proceeds, like many journeys, looking backwards at turns, but ever forward.  Hence the final movement, titled The Explorers, where the ship appears to be taking off into unknown territory.  The scherzo movement operated like a Dies Irae, a monent of judgement clearing the way for a more esoteric future. "After the seas are all cross'd, ........The true son of God shall come singing his songs."  The mood is now altogether more esoteric, the first verse serene yet expansive with long lines that seem to stretch  and search. Shimmering strings echo the voices of the chorus, then joined by brass and winds, and later organ, repeat the harmonies.  After this long choral section, the symphony reaches a new stage. Farnsworth and Llewellyn lead the way ahead "fearlessfor unknown   shores on waves of ecstasy to sail". The solo violin defines yet another stage, with an element of peaceful bliss. Thus we are prepared for the section "O thou transcendent". Farnsworth's voice glows, the relative lightness of his baritone well suited to the luminous imagery in the text. In the finale, the energy and exuberance of the first movemen returns, invigorated "Away ! Away O soul! hoist instantly the anchor!"  Llewelyn rallies the chorus and the orchestra surges yet again. Sea shanty rhythms are heard again as the "ship" sets forth. The motif "Behold the Sea" is reprised before the very last section, but as the "ship" sails out of sight, silence gradually descends, as if some form of transcendence is achieved.  Brabbins's instinct for structure, honed from years of experience in modern music, pays off handsomely in this last movement, which unfolds with great coherence.  This A Sea Symphony feels like the herald of a new age, as indeed it was, connecting also to other 20th century music of spiritual yearning.

As a bonus, this recording includes Darest thou now, O soul, a three minute miniature for unison voices and string orchestra, (a hymn with orchestra !) using the same Walt Whitman text which Vaughan Williams used in Towards the Unknown Region.  It is an excellent choice, complementing A Sea Symphony not only in terms of poetic ideas but also taking up the violin line near the end of the symphony.
at September 12, 2018