Listening again to Franz Schreker's Die Geburtstag der Infantin (The Birthday of the Infanta) in both the 1908/9 original (Jürgen Bruns, Kammersymphonie Berlin, 1992)  and in the Suite arranged in 1923, of which there are so many performances that it's pretty much standard repertoire.  Recommended recordings are Gerd Albrecht and Lothar Zagrosek.   This had me thinking aboutb the connections between the two Schreker versions,  Schreker's Die Gezeichneten, (Please read more about that HERE)  Zemlinsky's Der Zwerg, Wilde's short story, Velasquez's painting Las Meninas and the historical roots of the legend.

Schreker's Die Geburtstag der Infantin was commisioned by Grete and Elsa Wreisenthal, dancers in the "expressive" fashion of the time, an early 20th century rebellion against 19th century ballet. Think Ida Rubenstein and even the character Leni Riefenstahl played in Das blaue Licht rather than Diaghilev and the Ballets Russe. Schreker's original was thus described as "pantomime", and scored for chamber orchestra.  The Suite was created for large orchestra, minus dancers and story line.  the emphasis now is on the series of dances  which work as "pure" music. The last two sections Die Rose and Der Spiegel are missing, for reasons unknown, which is a pity, since these are  the punchline of the drama. The Infanta gives the dwarf a white rose : why does it mean so much to the dwarf ?  When he sees himself in the mirror and realizes that it is his own reflection he dies of a broken heart. 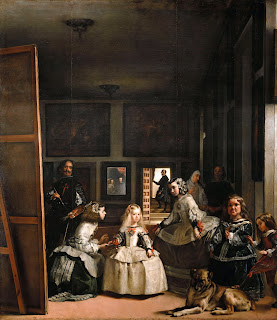 The idea that music must be "romantic" when there's a big, lush orchestra isn't true.  Romanticism with a  big "R" refers to the intellectual movement that revolutionized 19th century thought, which impacted on social and political change and on all art forms.romanticism   exploreed what we now call the Unconscious, and ideas about psychology before the term was invented. Thus the idea of the mirror, which incidentally exists in Velasquez's painting, where the artist is seen in the background  as a reverse image. He's painting the scene yet is also part of the picture.   In Velasquez's time, dwarves were no big deal at court, but for Wilde the story predicates on the Infanta who concludes "'For the future let those who come to play with me have no hearts!"  So Schreker's suite revision of  Die Geburtstag der Infantin should really be understood in context. Far from being slush romance, it has a very dark side, connecting to the taste for morbidity behind the spirit of the period, which found expression in many art forms, from Baudelaire to Wilde, to the Secession in Vienna and Munich, to Hugo von Hofmannstahl, to expressionism in painting and in the cinema.  Schreker's Die Geburtstag der Infantin is also not a one-off.  Schreker would develop the ideas in many later works, most obviously Die Gezeichneten, where the "dwarf figure",  Salvago, creates a paradise which becomes a cover for depravity. What seems beautiful on the surface, just might not be so within. And vice versa - ugliness might conceal true inner beauty.  Please read my analysis of the opera here.

And thus to Zemlinsky's Der Zwerg.  Significntly, this was written 1919-1921, after Die Gezeichneten, which premiered in 1918, and at a period when Expressionist ideas were influencing art, film, music and literature. The libretto was written by Georg Klaren, adapting the story further, with multiple new connections.  Alma Mahler and Franz Werfel (who'd been her partner since 1917)  were interested too. The bucolic dwarf in Wilde's story is now a sophisticated composer "from the East", a snide reference to Zemlinsky's ancestry and his father's  pretensions to nobility.  But Klaren pointed out that the Court, for all its sumptuous riches, was "peopled with over-refined, decadent, not to say tainted characters" while the Dwarf represents a purer soul.   There's much more to the opera than Alma, who had dumped Zemlinsky in 1902. By this stage Zemlinsky was successful and married to Luise, a woman almost the reverse image of Alma, and in many ways had sublimated his feelings for Alma in art. As Anthony Beaumont writes, Der Zwerg was like a coffin "to  borrow the imagery of Dichterliebe  - in which his love and pain were laid to rest".  Perhaps the ghosts of the dwarf and those who hurt him are thus buried. Zemlimnsky's next major work was the Lyric Symphony,  a masterpiece which breaks new ground musically and in terms of subject. Please read more about that HERE and also HERE
at September 26, 2018