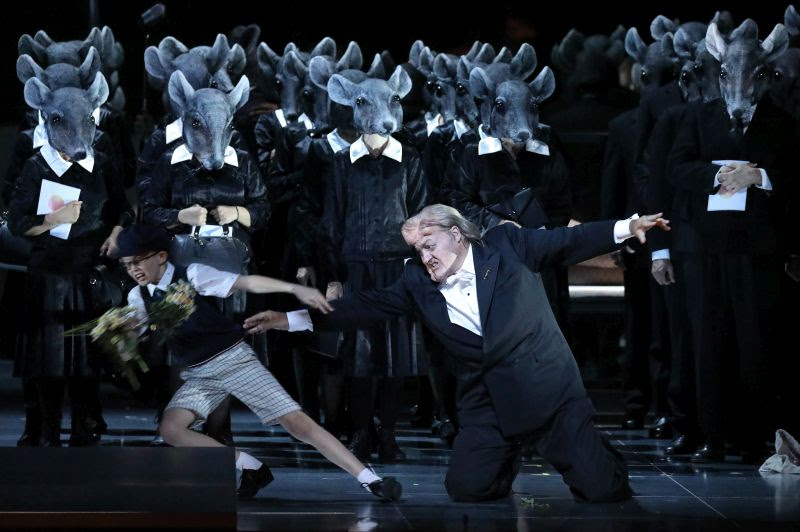 Franz Schreker Die Gezeichneten from the Bayerische Staatsoper, Munich, conducted by Ingo Metzmacher, easily the most rewarding full performance ever. Metzmacher gets Schreker – revealing his modernity and originality.   There are many kinds of "modern". The idea that 20th-century music can only be atonal/tonal, or dissonant /romantic, is nonsense, a notion compounded by audiences who don't actually listen, but think through preconception. Schreker was a highly original composer, very much a man attuned to the creative ferment of his time, fuelled as it was by new ideas and social change.  Die Gezeichneten flows from the same Zeitgeist that produced Freud, Expressionism, modern art and literature.  In the libretto, Schreker makes a wry dig at Puccini and Strauss, meaning, I think, Johann rather than Richard, for Die Gezeichneten has a lot in common with Die Frau ohne Schatten.  Both operas, written at the same time and premiered within a year of each other, explore the nature of creative art through a lens of morbid psychology, which is a theme which runs through much of Schreker's work.  Directed by Kryzsztof Warlikowski, this production is musically sensitive and well informed, and also connects the opera to other currents in art and society in its time. This Die Gezeichneten goes a long way to restoring Schreker's true status in cultural history.

Metzmacher conducts the Vorspiel so the surging pulse heaves, as if propelled by ocean tides.  Salvago's Elysium is an island, as isolated as the man himself, surrounded by currents beyond his control.  The moon controls tides. The image of the moon appears in the libretto, intensified by musical figures that describe darkness and flickering light.  To the Greeks, the moon symbolized Athena, the goddess of art.  For Goethe, the moon symbolized chastity, inspired by his patroness, the Duchess of Weimar.  As the Vorspeil proceeds,  we see Salvago (John Daszak) , his head covered by a bag, looking towards an orb of white light that dominates the darkened stage.  Later, when Carlotta (Catherine Nagelstad) is seduced, the orb turns red (as described in the text).

Complex dichotomies operate throughout this opera, reflecting conflicts that can never be reconciled.  Ugliness and beauty, creativity and destruction, purity and corruption: thus the churning tensions in the music.  Metzmacher isn't afraid to emphasize the contrast between lush orchestration and the savage undercurrents.  Luxury is deception. Like the grotto, beauty is delusion.  Women are violated. Lust is joyless, motivated by power, money, and something even more sinister. Carlotta succumbs, as graphically described in the text and music. Wisely, Warlikowski doesn't depict the scene, concentrating on Tamare's braggadocio and the music around it. Salvago isn't as upset by the idea of Carlotta being raped as by the realization that she might have had a part in proceedings.  We see her dressed in white, her dress back to front.  The ensemble that follows isn't a trio, because all three characters are singing at cross-purposes.  No dissonance but no harmony, either.  Wonderfully astute writing on Schreker's part and well executed in performance. 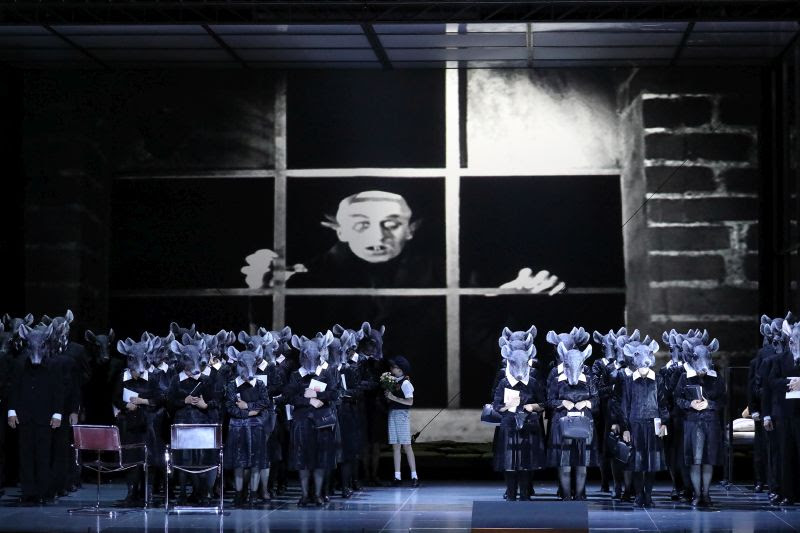 Salvago creates Elysium to please his friends, as if by creating art he can compensate for his physical ugliness. How far is he culpable when his friends misuse his grotto for evil?  Carlotta falls in love with him partly because she can see good in him, but also because she sees the potential for artistic creation of her own.  In some ways, the second act is the heart of the whole opera. Carlotta's friend paints only hands, but the hands she paints are so expressive that they can portray whole stories. Art is invention, but can reveal deeper truths.  Thus Carlotta, an artist, sees  more  in Salvago than meets the eye.  Thus scene is brilliantly depicted, with imagination and sensitivity.  A second stage appears behind the singers. At first we see what appears to be a dragonfly, which turns out to be a young girl. She has the head of a mouse.  Her family are around her, too, sometimes interacting. Humans with mouse heads. We are in Die Frau ohne Schatten territory, or rather the world of surreal symbolism that fascinated a generation familiar with Classical antiquity, discovering psychology and Jungian archetypes. Clips of silent movies appear  behind the action. Scenes from Der Golem, and Frankenstein, where a "monster" shows tenderness to a little girl, then scenes from The Phantom of the Opera and Nosferatu where the "monster" isn't benign.  Thus Warlikowski makes connections between Die Gezeichneten and other Schreker operas, with other cultural memes which confront sexuality and fear.

Warlikowski doesn't need to show Carlotta with paintbrush and easel.  Her painting exists in her soul.  Does she love her creation more than reality?  Why does he pull back, paralyzed with inhibition, when his wildest dreams come true as she declares her love ? Why does she, too, pull back on the eve of their wedding ? Does she intuit that their relationship will be sterile due to his inhibitions ? Does she respond to Tamaro because he's sexual, or because he has the courage Salvago lacks?  Christopher Maltman, as Tamaro, is a hunk. Salvago lives in his head, while Tamaro lives in his body. He doesn't like mirrors because they make him face himself.  But can he escape? Warlikowski's staging (sets by Malgorzala Szczesniak) hints as what is not said.  Mirrors, often distorted, appear now and again, sometimes as physical mirrors, sometimes as subsidiary characters like Mattuccia (Heike Grotzinger) and Pietro (Dean Power), usually roles so small they don't get attention, but which exist for a reason. Salvago isn't the only person trapped in games in the guise of service to others.  A wonderful touch - Metzmacher himself is glimpsed on stage from time to time, reflected in the mirrors.

In this production, Salvago's spoken monologue is included, which makes a difference  since it shows how he reflects on his own condition though he can't break out of it.  Though he  didn't rape women, he is morally culpable by making the violence possible,. Extremely moving, especially since Daszak delivered it with great dignity.

Schreker writes an angelus into the music before the party.  Angels appear on stage, but angels dressed in nude suits.  They (male and female) are supposed to resemble showgirls but they dance so deftly en pointe that they're clearly ballet dancers with great technique.  The wedding guests are prissy: they don't like nakedness but sex is all around.  Later a voluptuous stripper bumps and grinds beside Salvago, who doesn't notice.  Either he's too uptight or he can't see the beauty beneath her poundage.  Eventually, like so many others before her in this production, she ends up inert, in a display case, unused. 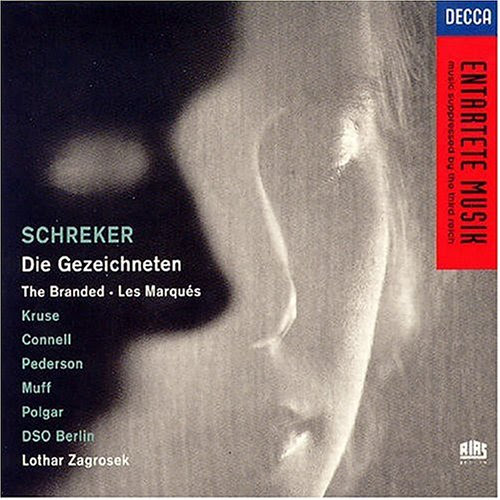 At the end, Tamare sings about a village fiddler gone mad because  the girl he loved found another man. This is a reference to a medieval legend, which pops up often in German literature and song.  Salvago asks for his cap and bells. Has he gone mad, or are he and Tamare re-enacting an old saga ?? There are so many levels in Schreker's Die Gezeichneten, skilfully blended together,  Warlikowski's silent movie clips and business suits extend what is already in the opera, though  few productions come as close to its true spirit.  Altogether, the finest Die Gezeichneten that I can imagine, full of detail and sensitive to music and meaning.  Bayerische Staatsoper productions don't usually make it to DVD, but the audio recording to get is  the one on right HERE. Lothar Zagrosek, DSO Berlin from the Decca Entartete Musik series, which is the benchmark reference. Outstanding, and even Matthias Goerne (aged 26) in a minor role.

Please see my other articles on Schreker, Braunfels and others (including Strauss), and on silent film and Weimar.
at July 02, 2017