Wagner Tannhäuser at the Bayerische Staatsoper, Munich,  with Klaus Florian Vogt, Christian Gerhaher, Anja Harteros and Georg Zeppenfeld, conducted by Kiril Petrenko.  That the singing was brilliant is no surprise, since these singers are so familiar that what they do isn't "news", though I'll write more later.  What was a surprise was the staging, or rather the thought that went into the dramaturgy.  The Overture seemed to make no sense at all. Venusberg represents unbridled sexual excess. Wagner's description is unashamedly explicit - Sirens are bathing - naked - in waters pouring from a cave hidden by cliffs, lit in lurid flesh tones. A vagina !  Modern audiences couldn't cope. Yet here we saw maidens in Grecian garb, as elegant as marble figures.  An Abendstern Venusberg? "Wie Todesahnung, Dämm'rung deckt die Lande,umhüllt das Tal mit schwärzlichem Gewande". Venusberg aping Wartburg? Upside down, I thought, at first.  But maybe that was the point. Venusberg and Wartburg represent opposite poles. Venusberg symbolizes sex, creativity, and life: Wartburg symbolizes denial and death. Which, in fact, is more "pure"?  Thus the Cupids around Venus's couch are unformed blobs of flesh: a shocking image, but again that might be the point.  Venusberg is tainted. Tannhäuser needs to get away if he is to develop.

In Tannhäuser, Wagner develops his ideas on the role of art in life. Tannhäuser is a precursor of Walter von Stoltzing, the two Siegfrieds and Parsifal, who don't spring fully formed from the start.  Hence the Sirens at Venusberg, firing arrows, an image that doesn't make sense til we journey a while with the production.  If you don't know what you're shooting at, don't shoot! You might just be wrong. Wagner's heroes start out thinking they know everything. They only grow when they learn to learn.  Nothing wrong with that, as Wagner shows.  In our own time, when anti-intellectual populism prevails, Wagner's message is frighteningly prescient.  Like the Knights of the Grail, the Knights of Wartburg are aggressively insular, blocking out ideas other than their own, resenting dissent.  Tannhäuser could have an easy life playing their games, but he chooses not to, striking out on his own. He searches for truth whatever the forces against him. And Elisabeth sides with him, sacrificing herself.  Tannhäuser may never unlock his Grail, but redeems himself because he has vision. For Wagner, religion "is" art, so the quest for artistic integrity can never end.   An artist seeks enlightenment, not playing to the crowd.  Thus the Grail Knights desiccate until they learn compassion. What will happen to Wolfram and the Minnesingers of Wartburg with their sterile dreams and inhibitions? An insular community based on denial, and hatred of women in particular, isn't conducive to creativity.

The best Tannhauser I've ever heard live was Johan Botha (read my tribute here)   Klaus Florian Vogt comes pretty close: two voices of exceptional beauty and purity.  In fact, I can't think of any time when I haven't loved what Vogt's done, even outside opera.  Fortunately, the action in this production was understated  - "Abendstern" stillness - so we could savour the voice and its subtle nuances.  Vogt's voice is glorious, but he can convey Tannhauser's weariness, suffering and, at last, humility."0 Wolfram, der du also sangest, du hast die Liebe arg entstellt!"  and later "Hör an, Wolfram, hör an! Inbrunst im Herzen, wie kein Büsser noch sie je gefühlt, sucht' ich den Weg nach Rom"  When Tannhauser sings like that, Wolfram is eclipsed.  Even in small, trelatively unobtrusive moments, Vogt excels: "Heilige Elisabeth, bitte für mich! "  The voice is luminous, Vogt;'s face glowing as if lit from within. .

Christian Gerhaher is the Wolfram of choice these days, after his  astonishing breakthrough in the part seven years ago.  He's had his ups and down in recent years, so it was good to hear him back on form here: much better than in Vienna in 2015 though not quite as astounding as in London.  I've been listening to him since he was young and unknown, nearly fifteen years ago and have his first CD.  He's an opera fan's idea of a Lieder singer, better in opera than in art song, though it would be nice if he'd broaden his repertoire.  I'd like to hear Matthias Goerne as Wolfram in the alternative cast, with a darker, more mysterious timbre.  Anja Harteros we hear a lot of live, too.  So what if she doesn't do the Met ? The European market is huge, the population's coming up to 750 million.  Rich as her voice is, there's a sensitivity to her singing that suits houses like Munich and London (ROH capacity 2200). She's an unusual Elisabeth, but interesting. Elisabeth's a strong, independent-minded person who stands up to the bullies in her community.  Harteros's Elisabeth is no warrior. Her weapon is prayer. Hence the air of humility which Harteros brings to the part expand characterization, and makes the role even more sympathetic.  Georg Zeppenfeld, another much-loved regular, creates a forceful Hermann, Landgraf von Thüringen.  Unlike Wolfram and the other Knights, The Landgraf is decisive: a Gurnemanz, a leader among conformists.  Elena Pankratova's Venus was full-throated and voluptuous. As always, minor parts and chorus at the Bayerische Staatsoper are wonderfully cast.

Kiril Petrenko conducted. The Overture and other orchestral passages were written to accommodate dancers, so a certain amount of rhythmic liveliness is in order, In many productions, the dancing is much more exuberant : Venus hosts orgies, and her sirens dance in order to seduce.  Petrenko's tempi were on the slow side, more langorous than orgasmic, but coolness works better with the "Abendstern" imagery, and the idea of the Moon. (Wagner would,of course, have been familiar with Goethe and his relationship with the Duchess of Weimar.)  The orchestral playing was well judged and rather elegant, again matching the marble and silk stylishness of the staging.  I would have liked more punch in the Pilgrimage music to emphasize themes of movement and physical travail.  Still, in music as good as this, there's plenty of room for interpretation.

Excellence from Munich is pretty much the norm. What's "news" is the staging,. It's controversial because it's not simplistic, and can be unsettling. Lots of stylized symbolism and abstraction, but also a lot of detail to reward careful observation.  Plinths with key words like "Kunst" spell things out to make things clear.  Amidst the sterile orderliness, a glass case with squirming, indistinct objects, like trapped life forms.   Rocks are seen, from which gold can be extracted - a metaphor for Tannhäuser's development as man and artist. The Minnesingers seen wrapped in white, like nuns and curtains like shrouds. This is by no means as strange as it seems, since they are a mystical order, vowed to purity and self denial.  To Wagner and to Tannhäuser, asceticism is living death, a rejection of creative growth.  The Minnesingers don't know what they're missing because they block out the world.  That's why they're so scared when Tannhäuser praises Venus.  Tannhäuser and Elisabeth sing to each other in front of tomb-like structures with the names "Klaus" and "Anja" carved thereon. An interesting if quirky way of reinforcing the idea that art is an act of creative imagination, made by living people. 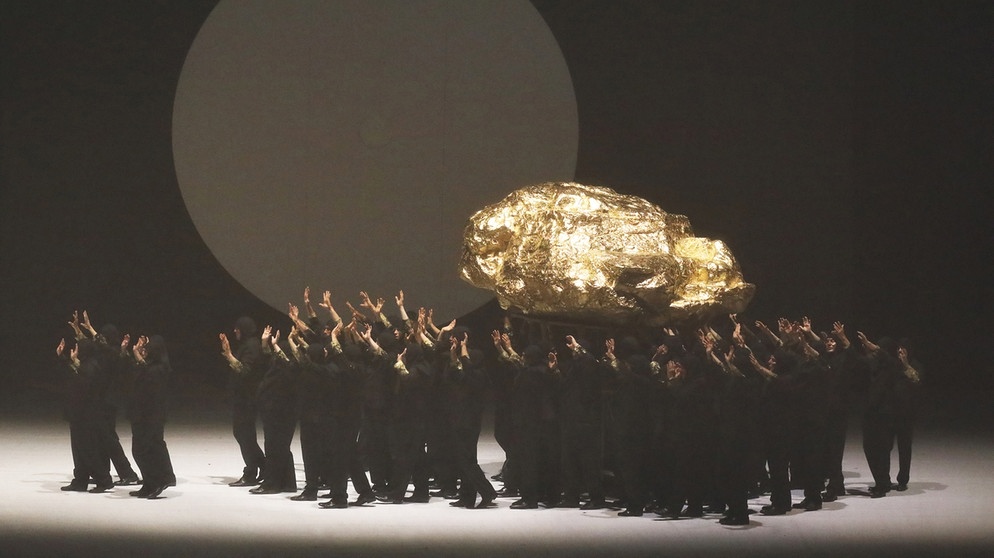 The director, Romeo Castellucci, is new to me. He seems to do a lot of theatre work, hence perhaps the formal, stylized abstraction of the designs, costumes and lighting.  Much more intriguing, though, is the thought that clearly went into the dramaturgy, by Piersandra Di Matteo and Malte Krasting. Opera is more than ear candy. Especially opera by Wagner, for whom ideas, drama and the human condition were inextricably linked.  These days the word "concept" is used as a swear word, but all it means is joined-up thinking, connecting different ideas, examining things from different perspectives. Di Matteo and Krasting understand how the music connects to ideas, and how this opera connects to Wagner's other work and even extra-musical concepts like classical antiquity. The staging is a lot closer to the libretto than meets the eye.  Tannhäuser is allegory, a fantasy, a work of art about art.  How else does a medieval German hook up with a Greek Goddess? And as Tannhäuser discovered, an artist needs to create to live, to keep learning and keep developing.  He chose the more difficult path to Rome. The Pope didn't understand, but too bad.  His loss, not Tannhäuser's.
at July 10, 2017