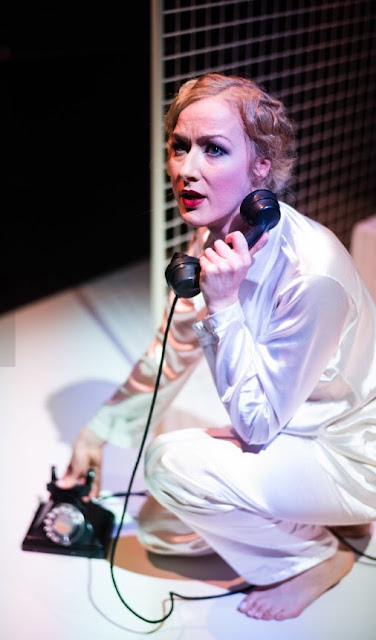 When Denise Duval premiered Francis Poulenc's tragédie lyrique La Voix Humaine, in 1959, she wasn't exactly young. But recordings of her performing it reveal a bright, youthful voice and impressive acting skills. A regular in new Poulenc works, Duval fulfilled what the composer called for in his brief notes on the musical interpretation: [the role] "ought to be performed by a young and elegant woman. This is not about an elderly woman who has been abandoned by her lover."

At Kings Place, London, Sarah Minns, with Richard Black (musical director) an expert hand at the piano, in Poulenc's own piano version of La Voix, uses the English translation by Joseph Machlis issued by Poulenc's publisher, Ricordi, in 1977. Minns is a few years younger than Duval was in 1959 and ideally fits Poulenc's call for youth and elegance. She is also one of the most capable actors in classical singing in London. That is crucial because, to be successful, La Voix Humaine -- a 40 minute-plus psycho-drama for soprano (called, simply, Elle) in conversation on the telephone with a former, or still fleeing, lover, whose voice we never hear, with alternating emotional support and assault from the piano score -- is no place for acting wimps.

In her programme notes to this OperaUpClose production, director Robin Norton-Hale tells us that in the opera's preparation she and Minns mapped out what the unheard lover at the other end of the line might have been saying. An eminently sensible strategy, which added colour and authenticity to Minns's responses. There is clearly a back story in Jean Cocteau's libretto (based on his 1928 play). Elle's lover is already well on the run. From what Elle says on the phone it emerges that he is seeking to retrieve letters they have exchanged. And the lover has abandoned his pet dog at Elle's apartment. The dog passage is apparently sometimes cut by directors who see it as a baffling non-sequitur, but Minns's extremely sensitive delivery of the description of the dog's state -- pining for his master, refusing to eat, lurking in the hall, turning vicious -- makes it clear that the dog is a surrogate in suffering for Elle. "In spite of his intelligence, he surely cannot guess the truth."

But since Elle's phone conversations are fraught with deception -- about what she is wearing, where she has been and with whom (lunching with Martha?), when she has in fact been in a sleeping-pill swoon -- how do we know for sure that the dog is not still full of joie de vivre and eating well? Or maybe stiffly starved to death on the doormat. Elle's changes of mood are adeptly handled by Minns: her frustrations with the party line (nothing to do with the Parti Communiste Française -- if you are too young to have experienced one, check Wikipedia); her barefaced lying bravado (not that the unheard voice does not offer his own fair share of deception); her descent into despair, sometimes retracting her lies to the point of admitting to what is effectively a suicide attempt. Another crucial episode -- when "Madame" interrupts on the party line for the third time. Elle's anger at the eavesdropping as portrayed by Minns is visceral and scary. ("But, Madame, we're not trying to be interesting, I can assure you ... If you really find us so silly, why are you wasting your time instead of hanging up?"). In her anger, Minns powerfully reminds the audience that we too have been salaciously listening in on a private conversation for the past half hour or so.

Simplicity and elegance are key features of this production, with a nod towards the 1930s. Minns wears white silk pajamas, sometimes with a fur-collared overcoat over them (set and costume designer: Kate Lane). Lane's set is minimalist and subtly lit (lighting designer: Richard Williamson). At first I thought the wire mesh panels might be overstressing Elle's isolation and mental imprisonment, all of which is more than adequately spelt out in the libretto. But I rapidly concluded that they amounted to rooms in the apartment that Elle could wander around while remaining visible. A telephone expert did suggest to me that the phone flex might be out of style for the 1930s. But nothing is perfect in this world, is it?

Certainly no directorial overkill here. Do we really need the audience being guests at a party in Elle's apartment (she's not well enough to organise one), or videos of the voiceless lover? No, not when what is all there already in the libretto and piano score is so skilfully presented.