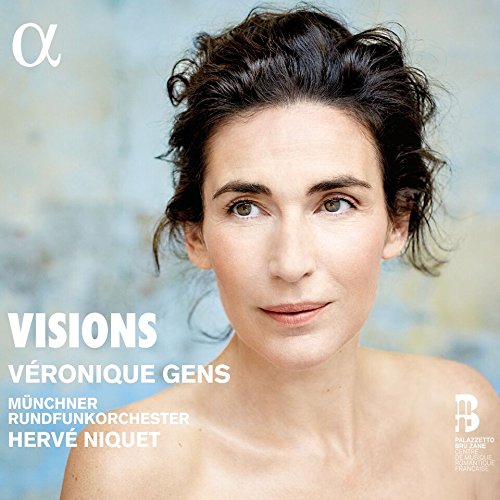 Ravishing : Visions, Véronique Gens in a glorious new recording of French operatic gems, with Hervé Niquet conducting the Münchener Rundfunkorchester.  This disc is a companion piece to Néère, where Gens sang familiar Duparc, Hahn, and Chausson mélodies. Here Gens presents extracts from Grand Opéra, reflecting her Tragodienne series of operatic arias.  Visions is a stunner, rich and so rewarding that you want to rush out and hear each opera as a whole.  This might be easier said than done, for some of the operas here aren't well known. Thus, all the more reason to get this recording because some real gems are included which  you've almost certainly not heard done as well as they are done here. Véronique Gens is a great pioneer of French repertoire. So intoxicating is this recording that if you come to it as a taster, you could end up addicted.

Visions - visions of ecstasy, religious or romantic, exotic dreams and horrifying nightmares, virgins, nuns and heroines, plenty of variety, yet each piece a work of theatrical imagination  Alfred Bruneau's Geneviève (1881) for example, from the cantata the young Bruneau dedicated to Massenet.  The piece begins with a dizzying evocation of a storm. If this sounds Wagnerian, the scène lyrique that rises from it is decidedly French. "Seigneur ! Est-ce bien moi que vous avez choisi?", for she is just a shepherdess tending a flock.  But the nation needs her, and  she must put her mission above herself. From César Franck's Les Béatitudes (1879),  a moment of quietude interrupted by the fierce scream that introduces the récit et air de Leonore from Louis Neidermeyer's Stradella (1837), its rhythms influenced by Rossini, enhanced by florid vocal frills.  Benjamin Godard's Les Guelfes (1882) is represented by an orchestral prelude  introducing a song describing Jeanne d'Arc's journey to Paris, her way lit by angelic harps.

From history to fantasy, Félicien David's Lalla Rookh (1862).  French orientalism gloried in exotic images. This song is exquisite, its delicate perfumes warmed by the beauty of Gens' clear, pure expression.  It also evokes the aesthetic of the Belle Époque. Thus a song from Henry Février's Gismonda (1919) a reverie with tolling bells where a solo violin shadows the voice.The protagonist is a nun, but longs, without much hope, for sensual love. Camille Saint-Saëns's arrangement of Étienne Marcel's Béatrix is altogether stronger stuff . Cello rather than violin, and mournful winds and a resolute vocal line. Béatrix knows that the love she knew will never return. "O Beaux Rêves évanouis ! Éspérances tant caressées!". This song is reasonably well known, and Gens does it beautifully.

This selection from Jules Massenet's La Vierge (1880) begins with an orchestral interlude. The Virgin Mary is about to die. The mood is subdued.  But the Gates of Heaven open showing the Virgin a vision of Paradise.  "Rêve infini, divine extase, l'éther scintille et s'embrase!" Gens voice glows, illuminated by rapture. After that explosive high, we return to the relative sedate Blanche from Fromental Halévy's La Magicienne (1885)  who chooses the cloister, and to the prayer of Clothilde from Georges Bizet's Clovis et Clothilde (1857). Another song whose loveliness lies in its simplicity, again ideally suited to Gens's clear, pure timbre.  .To conclude, L'archange from César Franck's Rédemption (1874) a vision of the End of Time.  "L'homme rebelle n'obéit pas", and God, in anger chastises him.  "Mais que faut-il pour son pardon? Après des siècles d'abandon , une heure de prière!"  A rousing and rather cheerful end to a very good recording.
at July 12, 2017