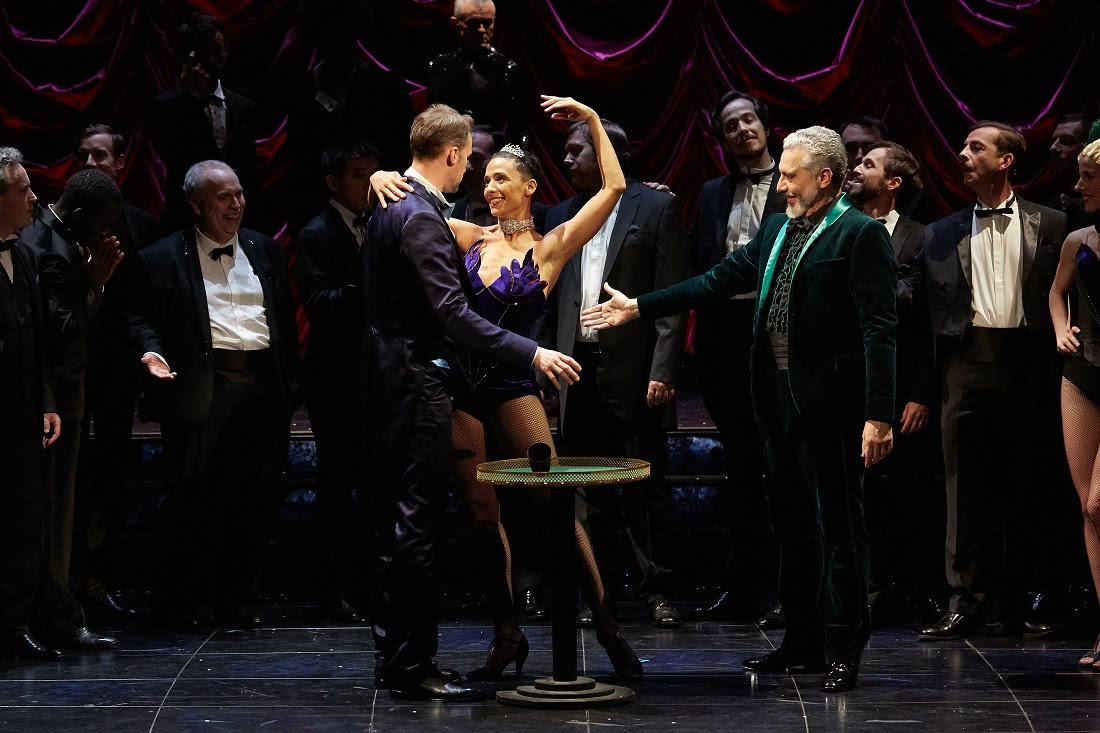 Camille Saint-Saëns Le timbre d'argent from l'Opéra-Comique, Paris, a joint production with the Palazetto Bru-Zane. A performance so vibrant and vivid that it should bring Saint-Saëns's operas back into the mainstream.  Saint-Saëns was just  30 when he completed it, quite an achievement for a young composer who had hitherto written a few works for chamber ensemble.  Le timbre d'argent (The silver bell) is an ambitious piece, in the extravagant tradition of Grand Opéra   It has all the elements of French operatic style - a spectacular plot enlivened by fantasy and the supernatural, showpieces for singers and chorus, lively interludes for dance and unusually imaginative orchestration. Heard here in the 1913 full  edition prepared by the composer, the opera straddles 19th and 20th century French music theatre.  The plot is based on Faust, and clearly inspired by Berlioz and Gounod with whom Saint-Saëns  was connected.  The stylish vivacity in the orchestration is wonderfully realized by the Orchestre Les Siècles  conducted by François-Xavier Roth, The choir is Accentus, no less, and soloists include Edgaras Montvidas and  Hélène Guillmette.

It's Christmas and the choir are singing jolly songs  "Noël ! Noël !"  Hélène (Hélène Guillmette) and her maid Rosa (Jodie Devos) are singing, too.  But Conrad (Edgaras Montvidas) moans about his miseries. Perhaps it's a wry joke on the composer's part to set the part for a tenor with a heroic timbre who can't really be as sick as he thinks he is.  A chill sets in, the violins trembling, chords breaking off in fear. Again we hear the merry choir "Tra la la" but the dance turns to death march.  Spooky winds, swirling figures but Conrad keeps singing"I am cursed!  Worse is yet to come.  The strings buzz madly then diminish.  An alphorn (?) calls and angels sing in the choir.  An apparition appears out of the brume. "Flee, flee, J'ai peur " sings Conrad. Is it Conrad's doctor Spiridion (Tassis Christoyannis)?  Or Mefistofele?  Conrad's fevered mind can't tell. Spiridion gives Conrad a magic bell to soothe his spirit.  Thus, the pure clean ring of a silver bell. and a scream.  ,Dums roll, violins spin dizzying patterns., the brass calls, the choir sings alarm.

A long orchestral interlude represents Conrad's journey through space and time   He is fixated on the vision of a dancer, who symbolizes, the epitome of beauty.  The dancer dances, but doesnt sing. In an opera full of singing, that's a telling note.  The music zings, but with an unnatural glow,  angular, crazy rhythms, hurtling forward, brass and strings pumping along. Spiridion's lines are long and curving, like a serpent. He's tempting Conrad, an innocent in Eden.  The musical,writing is almost cinematic. A wailing solo violin suggests a village musician. Or the Devil, who has the best tunes. Thus Hélène's showpiece aria.  "Le bonheur est chose légère", is haunted.   But the harps, strings and choir suggest  that all is not yet lost.  There are comic moments, like an aria for baritone (Spiridion) mocking marriage, deliciously vulgar, almost music hall.  Another wonderful orchestral entr'acte, whizzing strings  punctuated by ebullient percussion. The choir sings a raucuous song: the punctuations suggest glasses being raised, or high-kicking dance.   The libretto includes references to dancers playing roles in the action, but I only know the audio.  The mood changes to horror. "Maudit, maudit" sings Conrad, as he realizes the price that must be paid fir his quick-fix cure. Some innocent soul dies when he profits.

More musical, adventures in the Third Act, portrayed through orchestration: suggestions of folk song, almost, like bagpipes. The choir sings a jolly chorus "Bonjour! Bonjour!".  But Conrad's song , though lyrical , is pensive.  He's thinking of  Hélène.  She joins him in a duet, their voices fluttering around each other like the butterflies in the text.

Several more opportunities for dancing.  Exotic "oriental" music, vaguely Arabic, before the orchestra explodes in a climax that might be a storm. From the tumult whizzing figures arise from the strings, flying figures perhaps suggesting winds of change.  Music as scenic as this stimulates the imagination, its pictorialism exists in the mind, not in reality.  A fanfare of brass announces another chorius "Tra-lala", so vigorous that you're drawn in.  Again, the music is punctuated by fierce outburts, "Un, deux, trois, quartre" , sings Conrad, while the orchestra beats time behind him. More ominous percussion, but the mood is broken by the voice of Hélène, singing a melody so pure and lovely that her voice suggests what the true timbre d'argent might be: not Spiridion's silver object, but Hélène herself.  Spiridion resurfaces.  Hi song, though sinister, is oddly moving.

Another orchestral interlude, marked by melancholy violin.  Conrad's torn between Spiridion and  Hélène. The bell rings in the orchestra, tolling like a church bell.  The orchestra joins in with fulsome melody. Hélène calls.  Conrad responds.  Thunder strikes, but from the tempest in the orchestra we hear the sound of harps, and the solo violin again, its melody now firm and clear. The line rises upwards then descends, and the orchestra sings a gentle song, not quite a lullaby.  The female voices in the choir sing of love.  has the crisis passed? In the distance the choir sings a hymn.  Possibly, it's still Christmas.  "Mon coeur!" Conrad cries.  The bell theme returns, quietly.  Conrad and Hélène unite at last, in duet, surrounded, haloed by the orchestra. The choir sings "Alleluja!"  With a final. affirmative crash, the opera ends.  Conrad's saved, by love.  Listen to the broadcast here.

François-Xavier Roth, has a thing for Saint-Saëns. He's conducting Saint-Saëns's Piano Concerto No 5 in F major, 'Egyptian' at the Proms on 16th August, together with the Bacchanal from Saint-Saëns. Samson et Dalila. which Philippe Jordan conducted at the Opéra National de Paris last year (Read more here).  The Palazetto Bru-Zane, which organized this production of this  Le timbre d'argent, also presented Saint-Saëns Prosérpine last year with Véronique Gens, conducted by Ulf Schirmer.