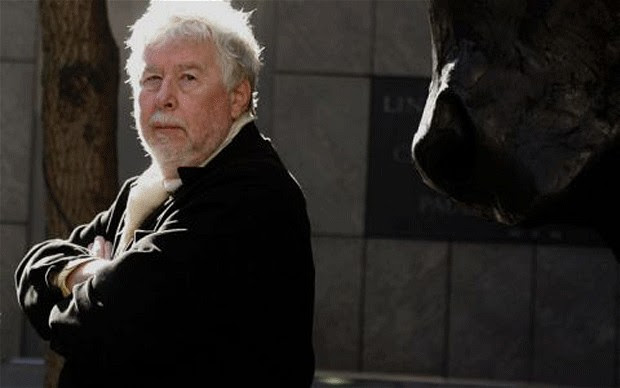 The UK premiere of Sir Harrison Birtwistle's Deep Time, at the Proms in the Royal Albert Hall,  with Daniel Barenboim who conducted the world premiere at the Philharmonie, Berlin, in May.this year.  Just as Barenboim's Elgar pedigree goes back a long way, so does his relationship with Birtwistle.  They've known each other since the 60's. Barenboim also gave the premieres of  Birtwistle's Exody in 1998 and of The Last Supper in 2000.

In an interview for his publishers Boosey & Hawkes, Birtwistle explained the term "Deep Time".  "...coined by John McPhee in a 1981 book Basin and Range, which refers to the idea of measuring things on a vast temporal scale beyond human comprehension such as the age of rocks. The concept of Deep Time follows on from the work of the 18th century Scottish geologist James Hutton who proposed that the processes of rock erosion, sedimentation and formation have ‘no vestige of a beginning, no prospect of an end’, a state of perpetual change...."   It's an idea which fits in well with the concepts that seem to lie beneath so much of Birtwistle's work: stratas and layers,  levels of time parallel and co-existence, puzzles, mysteries and patterns, often evolving as if generated by abstract but organic life forces.  Earth Dances, of course, and The Triumph of Time but also mysteries like The Minotaur and Silbury Air.

Deep Time seems to evolve out of nothingness. Bars are marked in silence until sound emerges almost imperceptibly. Slow, circular figures dragging forward contarst with sparkling figures comprising short, quick-paced cells.   Rhythms build up quickly to an exuberant angular dance, which then morph into flying figures which float above the steady pulse.   Crashing metallic percussion, the growl of dark, low brass and woodwinds. Base, middle and top notes like a complex but earthy scent.  Large, dense structures and fleeting whips of high-pitched sound, propelling forward thrust.  A soprano saxophone calls, marking intervals: wooden blocks are beaten in typically wayward Birtwistle zig-zag patterns.  Planes of sound from strings and winds, suggesting boundless vistas.  Towards the conclusion, trickling, tiny fragments, quirky changes of direction, and a return to long, slow, rumbles. As the music passes onwards,  cymbals clash and long planes stretch until at last the music dissipates into nothingness once more. Not before the brass and metallic percussion assert themselves once more, in quirky farewell.  I didn't think so much of inexorably slow forces but of a multiplicity of actions on different levels.  Birtwistle is never boring!  He turned 83 this weekend, but creatively he's lithe and agile.