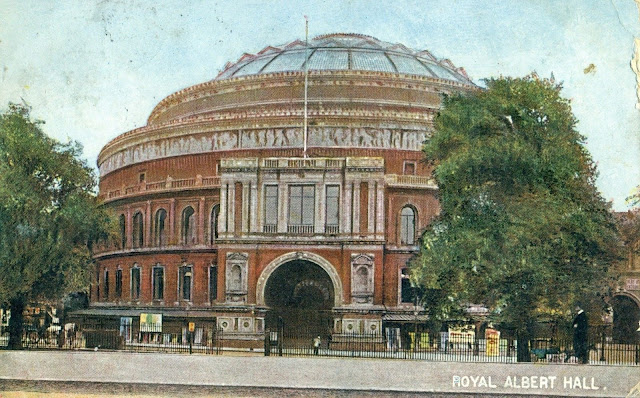 Secret messages? The First Night of The BBC Proms 2017: as always a thrilling sense of occasion. But what occasion, and who was it really for?  These are questions that the BBC and Proms team need to address. It's not enough to rely on formula.  This year we've seen what happens when politicians function like robots. spouting empty slogans on autopilot.   Big institutions like governments can't hang on to power "by right", but must earn their place. The evening kicked off with a new British work, to show how hip the Proms Team are.  For a change real music! Tom Coult's St John's Dance is an interesting exercise in perpetual motion and tempi, engrossing enough to hold attention, without being too taxing. Certainly better than some of the mindless pap we've had some seasons.  But beware! St John's Dance was a form of mass hysteria, where people kept dancing on, unheeding to their deaths.

Sir Henry Wood created the Proms on the principle that people were perfectly capable of learning if inspired by excellence and extremely high standards. His vision doesn't apply today when arts policy aims for the lowest possible denominator, on the assumption that people are too stupid to cope with anything that isn't dumbed down.  If arts managers don't have faith in their own product, how can they hope to convince others? And where is the real market?  Even the BBC has twigged that it's a fallacy that the arts depend on audiences who don't like serious music.  So why not put that into practice? The whole thrust of British arts policy is reductionist, uncreative and wrong.  White Papers might repeat the same old assumptions but that doesn't mean they're right and can't be stopped.  British arts policy is fundamentally misguided because it does't reflect economic reality.

Until such time as policy makers have the guts to question, we can but hope that some centres of excellence remain.  Like Beethoven, for example, whose vision and courage we need more than ever in this era of small-minded shallowness.   How wonderful to hear Igor Levit playing Beethoven's Piano Concerto no 3 in C minor, with Edward Gardner conducting the BBC Symphony Orchestra.  Fact is, excellence is by its very nature elitist.  Ordinary people are perfectly capable of smarting up rather than dumbing down.  Hooray!  This is what real music is all about: raising horizons.  For his encore, Levit chose Beethoven's Ode to Joy, transcribed for piano by Franz Liszt.   Culture doesn't exist in isolation: it crosses borders.  The arts business is international and must remain so.  Not long ago,  Her Majesty the Queen opened Parliament wearing a blue and yellow hat.  She's not allowed an opinion, but she's no fool, and she's not easily swayed by populist media.  Long may she reign!

Extravaganzas are part of the fun of First Nights of the Proms, so this year we had John Adams's Harmonium.   Four hundred and fifty singers - the BBC Symphony Chorus and BBC Youth Choir, joined by additional forces, ranged all round the back of the stage at the Royal Albert Hall.   Impressive to look at, and very well performed.  Harmonium predicates on huge swathes of sound composed of tiny cells   Sometimes the singers aren't singing text but creating planes of wordless noise.  Not being a fan of the composer, I won't comment on the piece as music, but everyone seemed to be having a good time.  The whole musical part of the Prom over in record short time to allow endless chatter and self-promotion on the part of BBC marketeers.

Each year I cover 30-40 Proms, so please keep coming back.  Please see my other pieces on the Proms, this year and in the past and on the Proms and Arts Policy.
at July 14, 2017