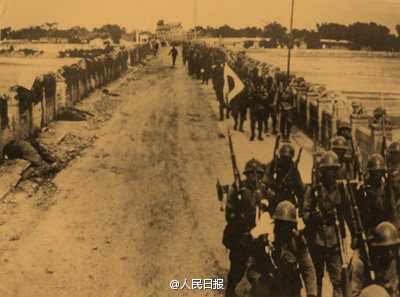 7th July 1937 - 80 years since the  start of the Japanese invasion of China.  The "Marco Polo Bridge Incident or 七七事變 is a hugely important anniversary, prelude to the massacre of Nanjing, the conquest of Shanghai and the war in the Pacific.  Luguo Bridge (as it's known in Chinese) was strategic because it's so close to Beijing, the symbol capital, though the seat of government had been moved to Nanjing by the Nationalists just ten years before.  Manchuria  was invaded in 1931, but 7/7/37 was an attack on the core of the nation.  Chinese from all regions took part in the resistance in the North. Eventually, the war moved South, too, precipitating one of the largest mass population upheavals in world history. No-one in China remained unaffected.  Effectively 7/7/37 marked the start of a cataclysm that's engulfed China for decades, its repercussions still being faced today. Mao and the Communist Party, for starters. To understand the present, it is absolutely essential to understand the past, and from the perspective of those who experienced it.  Nowadays it's fashionable to think in simplistic terms. There are some who'd even deny the impact of the Opium Wars. Imagine the situation reversed.  But the present doesn't exist in a vacuum. Identity is reshaped, distorted and revised, but the broader the perspective, the less likelihood of getting boxed into corners. Polarization is the enemy of truth.  Thus the more we learn, the better we can interpret.