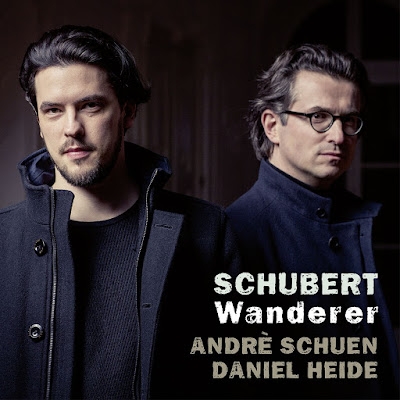 The young baritone Andrè Schuen is attracting a lot of interest among Lieder aficionados. A friend who heard him at the Schwarzenberg Schubertiade in August, and at the Wigmore Hall and Oxford Lieder Festival,  considers Schuen one of the most promising talents of the last few years.  Praise indeed from someone who has been listening for sixty years, and discovered Goerne and Boesch long before most.  This new recording, from Avi.music.de, features Schuen and regular pianist Daniel Heide in an all-Schubert programme.  Schuen's voice is highly individual, with a beautiful, distinctive timbre that makes him stand out.  But there's more to singing than a good instrument. Schuen has an instinctive feel for the way nuance shapes meaning, and innate musicality.  In a business where success can come from playing safe and sounding like someone else,  Schuen's unique voice and style is something to respect.  Though he has yet to mature (he's only 34), Schuen has tremendous potential and promise: if he develops into maturity at this level, he will be a force to reckon with. This Schubert set is a fairly typical collection of favourites, compiled to introduce a new singer to a wider audience, and it is very good indeed as such.  But I would also recommend getting Schuen's earlier recording with Heide, with songs by Schumann (Liederkreis op 24), Hugo Wolf and Frank Martin, which is even better and more unusual.  Rarely have Frank Martin's 6 Monologs from Jedermann sounded so good. There's also another set of Beethoven songs with the Boulanger Trio.    Together these three discs give a fuller impression of Schuen's talents and interests.  Please also read here about his Munich recital in November 2017.
"Ich komme vom Gebirge her".  Everyone knows Schubert's Der Wanderer D483, but Schuen makes it feel personal.  He comes from Bolzano in the Südtirol, and is fluent in Italian, German and Ladino.  That in itself means little, for we are all wanderers in the Romantic sense of the word. Indeed, perhaps even more so in this modern digital age where everyone's connected but not really connecting.  "Ich wandle still, bin wenig froh" sings Schuen with great depth, "under immer fragt der Seufzer, wo?"   In Fahrt zum Hades D526, Schuen's rich, resonant tones complement his ability to shape a dramatic line. He sings a lot of opera, and, though I haven't heard him in that, I imagine he's a very effective communicator.  The more lyrical An den Mond D259  brings out the warmth and tenderness in Schuen's delivery while Der Musensohn D764 demonstrates the crispness of his diction.  Totengräbers Heimweh D842 is beautifully phrased, as reverential as prayer. Schuen responds to the hypnotic piano figures singing with a sense of wonder, appropriately, since the gravedigger is seeing visions as he falls into the grave.
In Abendstern D806 the piano part seems to shimmer with surreal light while Schuen's singing shows well-modulated control : what is Mayrhofer suggesting in this elusive dialogue between poet and  evening star  ?  Im Frühling D882, to a poem by Ernsr Schulze, might also be more than it seems on the surface, for Schulze's relationships with women weren't quite right, but Schuen sings with sympathy and sincerity.  A rousing Wilkommen and Abschied D7676, at turns energetic and thoughtful, the changes of tempo and mood beautifully defined.
After writing this, I tracked down the BR Klassik documentary Der Stimme aus dem Gadertal.  I waas glad to see this, since Schuen is divinely good looking as well as talented; sometimes these things can go to a person's head. But the whole Schuen family are gorgeous and they also seem very well grounded.   When some people become celebs, it goes to their heads, but I don't think it will happen to Schuen. The house is simple and unfussy and the family seem to genuinely like being together. Dad helps Mum cook, and they all sing Ladin folk songs round the table.  I have friends on the Austrian side of the Tirol who did much the same thing, it's not that unusual.  Lots of music clips, of course, and extracts from Schumann, Schubert and Beethoven. Also a clip from Schuen's appearance in the title role of Hamlet in a new opera at Theatre an der Wien.  Yes, he can act as well as sing.  Enjoy the film HERE.
at September 14, 2018