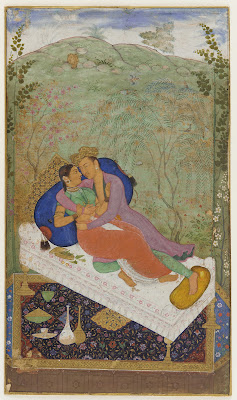 Next week, Vladimir Jurowski's conducting Alexander Zemlinsky's Lyric Symphony with the LPO at the South Bank.  It will be fun to compare it with Esa-Pekka Salonen's glowing account with the Philharmonia in 2009.

There's a lot more to this symphony than often assumed. Zemlinsky himself compared it to Mahler's Das Lied von der Erde but that was wishful thinking on his part. Both use exotic themes and merge song with orchestra, but structurally and conceptually they're different. Indeed, I think the more you know both works, the more they seem to diverge. The world changed drastically in the 15 years between the two  pieces.  Zemlinsky was caught up in the fashionable esoteric circles of the post-war years like many others seeking an alternative to ruined Europe.  Much wiser, then, to discard the old Mahler canard and think about what makes the Lyric Symphony unique on its own terms.

Even in terms of Zemlinsky's output as a whole, the Lyric Symphony stands out, like a sudden effloresence blazing out in a sudden flash of glory. And what does the Lyrisches mean? Zemlinsky uses a German translation of Tagore which to Europeans in the 1910's and 20's represented "ancient eastern wisdom". Musically, too, it's daring, as if Zemlinsky's approaching iunknown shores. Debussy, Ravel, Scriabin, Szymanowski, Janáček, all adventuring into new worlds wherre mainstream western traditions don't apply. Later in  life, Zemlinsky experiments with jazz but nothing like the wild freedom that inspired the Lyric Symphony.


To assess any performance, it helps to know the piece well, and its context and background. I originally learned the Lyric Symphony from the Bernhard Klee/BRSO recording from 1982 with Duesing and Söderström. She's wonderful, but the rest doesn't really hold together so well. There are several very good recordings and one major dud. Recommended: Eschenbach, Orchestre de Paris, Goerne and Schafer. This one's based on Beaumont's lucid edition, and shines with spirituial and musical conviction. Chailly, Royal Concertgebouw Amsterdam, Marc, Hagegård, is also excellent. The ancient Gabriele Ferro recording with Nimsgern and Dorothy Dorow is worth searching for as it's gloriously over the top. You also need to know Anthony Beaumont's recording because Beaumont knows what he's doing and has insight. Orchestra and soloists are OK but don't come near Eschenbach and Chailly. The dud is Conlon, but that in itself illustrates the significance of this symphony in the wider spread of Zemlinsky's music. Conlon immersed himself in the composer's work, but the Lyrisches escapes him.

Also, read Beaumont's biography of Zemlinsky, which is the benchmark, extremely well researched and analyzed. There is another more recent book, which doesn't come remotely near in terms of quality. Not recommended, not even as an introduction. and unless you know Beaumont, you can't assess the new book properly. Beaumont's book is not at all difficult to read but is not at all superficial. It's based a real understanding of the background and sources, so is an reliable, balanced work for general background as well as for Zemlinsky. Beaumont sets the best case for Zemlinsky, man and musician in his own right. He's much more interesting than the "late Romantic" pseudo-Mahler label would suggest. The Lyric Symphony is very much a work of its time - the 1920's - and should be assessed in proper historical context. Zemlinsky, after all, was extremely well connected, and knew Schoenberg, Korngold, Schreker, Berg and so on. (LOTS on this site, and in depth about these composers and this periiod, one of my specialities)
at January 17, 2011

Email ThisBlogThis!Share to TwitterShare to FacebookShare to Pinterest
Labels: zemlinsky

Thanks a lot for this, what a great piece of music. It seems to be having a bit of a renaissance; Kirill Petrenko is conducting the Wiener Symphoniker in it in Vienna in February and I'm looking forward to hearing it live for the first time. I've only heard the Eschenbach recording, I'll try to find Chailly too.

Another performance later in the year to look forward to (I hope to go): Franz Welser-Möst conducting the Vienna Philharmonic in Salzburg, soloists Christine Schäfer and Michael Volle.

Thank you for the comments and concert information. I was listening to this work recently (in Lothar Zagrosek live recording on Orfeo with Varady and Dieskau, I think not commercially available). I am impressed by the frankness and engagement of this music to go towards something like recognized alterity. There is perhaps confidence not an impression of decadence in that choice, like Ravel approaching jazz. I feel Zemlinsky knows from where he goes too. The more he is masterful when he opens to the other world. This sounds to me as a wished hearing. A little irony that these Rabindranath Tagore's poems are exposed to me in German: the different, estranged, point of view of the poems with the correspondence in the music come out very effectively I think.

Isn't it a wonderful piece! What fun you have ahead ! Oddly enough it was played at the Proms three times in the 1980's when it was very much en vogue. But now we know lots more about the music, the composer and his milieu, it's time for another surge.