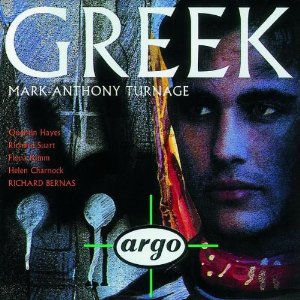 Vintage Turnage returns! Music Theatre Wales, which produced the shocking Philip Glass In the Penal Colony last year, is reviving Mark-Anthony Turnage's Greek. It's a "re-working of the Oedipus myth for the age of discontent".

Commissioned by Hans Werner Henze in 1988, it's an angry protest against Thatcher's Britain. What followed Thatcher, however, makes anything she did seem oddly innocent in comparison,  even selfless, if misguided. At least she read policy briefings and didn't deliberately invent things to please George W. Invading the Falklands was a no-brainer compared with invading Iraq, Afghanistan etc. Greek was the piece that helped make Turnage's name, so it will be interesting to compare it with Turnage's new Anna Nicole, premiering next month at the Royal Opera House. The inspiration for that was Beyoncé.

The New Greek by the Young Turk Turnage is being directed by the same team who did In the Penal Colony, headed by director Michael McCarthy. Simon Banham designs and Michael Rafferty conducts. On past form this should be good. Music Theatre Wales is small, but impressive. Singers include Marcus Farnworth, Sally Silver and Louise Winter. The tour starts in Brecon, Wales, on 2nd July then moves to the Cheltenham Festival on 7th July, and thence to the Buxton Festival. Possible London dates in the autumn? Incidentally, Music Theatre Wales is working together with Philip Glass on a new piece based on Kafka The Trial. If In the Penal Colony was anything to go by, The Trial from this team should be gripping.
at January 26, 2011