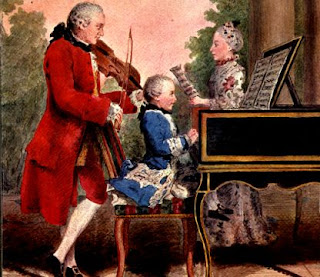 Mozart Marathon on the BBC has yielded some good moments, amid mindless chatter. Some of the talk shows are informative, but much is filler. The BBC has to aim at the generalist, not specialist market,  but "too" general is tricky. Presenters who know and genuinely know the subject, please, not just pretty faces (male and female) But still, musically there are good things.

I was surprised how much I enjoyed the oratorio Die Schuldigkeit des ersten Gebots (available online til Sunday), written when the composer was only eleven. Some good ideas there like sudden flourishes, especially in the soprano part that make you jump til you remember it's a small boy's idea of high jinks. Often it's very studied, which is hardly surprising since Mozart (and his Dad) are showing how clever they are but it's lighthearted and charming. Not bad for a depiction of the First Commandment! Hans-Peter Blochwitz, Aldo Baldin, Margaret Marshall, Inge Neilsen, Ann Murray, Sir Neville Marriner, Stuttgart. Naturally, in this BBC Marathon, it's paired with Apollo et Hyacinthus  in the well known recording with Arleen Auger and Anthony Rolfe Johnson.

Other rarities are hidden in "Through the Night" broadcasts. Ascanio in Alba K 111 on 5/1, Il sogno  di Scipione K 126 on 6/1, and late tonight Il re pastore.  I've been hunting for Mozart song, but searching is difficult. Because there's so much, it's  a good idea to be selective, choosing things that aren't easily available on the market. On the other hand, who could resist Nikolas Harnoncourt, Concertus Musica Wien, La finta Giardiniera with Moser, Gruberova et al?  More historic Harnoncourt tomorrow (Fri 7/1) Die Entfuhrung aus dem Serail.  Peter Schreier in 1988, my hero, always full of character.

One extra anecdote which proves why exposing kids to Mozart pays off.  I took my kids to Mozart's Birthplace in Salzburg when they were tiny. Paintings on the walls,  little furniture, and thankfully not re-designed for "kid appeal".  One of my kids walked around, confidently identifying the portraits. "That's Mozart's sister", "That's Mozart's Dad". Really impressive, other tourists turned round. "How did you know" I asked. "Saw it in a book you were reading" says preschool pipsqueak.
at January 06, 2011

I must confess I never liked Mozart's music - until now. I always wished I did, but I didn't, for some reason.

However, listening to a lot of this marathon managed to turn me on to him. Must be a good thing.

Incidentally, people often joke that Radio 3 should do a Stockhausen marathon. I can't be the only person who honestly wishes they would!

Hi Dominic, I've been enjoying it lots, too. Much less stressful than going to a concert or buying a CD> our point about immerrsion is good too, it's easier to get into something the deep end sometimes. They've prob done more Stockhausen than anyone. Two years ago there was a Stockhausen Festival, really worked because it was so inclusive (and live).