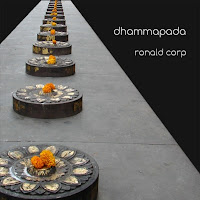 Dhammpada is  a collection of sayings of Buddha but you don't need to be Buddhist to benefit.  A singing version in translation of sections of the work, created by Ronald Corp is being premiered at Shoreditch Village Underground on 6th February. There's also a CD release on Stone Records. Musically this is in the westerrn tradition,  which is as it should be: since the wisdom is universal. Aspara, a SATBass ensemble sings the vocal segments. Nice performance. The singing is interspersed with recordings of bells, chants and drums made on location in Ind[a at places where the Buddha lived, so those who like atmosphere can relate to this. Generally westerrn music about non-western spirituality doesn't work for me for various reasons but I quite liked this CD because it's simple and unpretentious.
at January 22, 2011