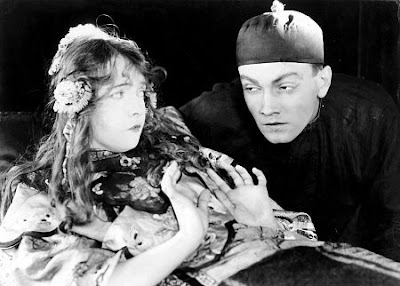 Broken Blossoms, D W Griffith's 1919 hit movie starred Lilian Gish. She plays a beautiful, doll-like waif who's horrifically abused.  One of the most famous scenes is the one where the abusive father shouts at the child,  "Can't you ever stop being miserable". So the girl, who has never learned how to smile, uses her fingers to hold up the corners of her mouth in a pathetic parody of a smile. It's so horrifying that I hope at least some audiences would have been shocked enough to do something about child abuse and the appalling social conditions in London slums.

Significantly though the film is titled "Broken Blossoms or The Yellow Man and The Girl". The Yellow Man was played by a white man, of course, Richard Barthelmess, made up to look like a cross between a caricature of a Chinese and Nosferatu. The audiences didn't know any real Chinese and were primed to believe in The Yellow Peril, poised to engulf the civilized world in opium, decadence and evil.  In that sense, Broken Blossoms is as racist as anything else D W Griffith made, such as Intolerance where blacks are treated like apes. Of course racism was an inescapable fact of life. Although all involved were American, the film had to be set in Limehouse London, not, say, San Francisco, which would have been explosive. Audiences could pretend racism was something that happened in foreign places. 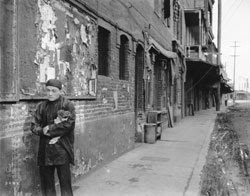 But there are curious twists in the plot. The Yellow Man was once an idealistic upper class scholar, who saw how the West had damaged China.  Opium, for example, was introduced by the British who used it as an excuse to wage several wars on China and grab concessions. The Yellow Man decided  to travel to the West to tell them about Buddhist values. Complete reversal of the Missionary thing, where western religion was yet another weapon through which the West could bully China. Quite amazing, this lone Chinaman, daring to leave home for the unknown. to "bring the message of peace to the barbarous Anglo-Saxons, sons of turmoil and strife". How many in the audience got the irony? How many spat indignant at the very presumption? 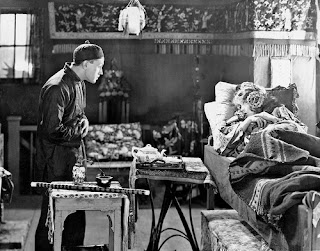 Anyway, Yellow Man ends up poor, isolated and defeated, but runs some kind of Jap For Po (miscellaneous goods) shop in Limehouse. One day Lilian Gish runs into his shop after being brutalized yet again. Yellow man looks after her reverently, calling her White Blossom though he doesn't actually speak. Bullying father kills girl and attacks Yellow Man with axe. Yellow Man shoots father (also a caricature) and carries dead girl back to his humble room, where he commits suicide, Meanwhile in China, a monk bangs a drum, and in London the police casually discuss casualties in the First World War.

Broken Blossoms is culturally hard to read because the image of the Yellow Man is so offensive and the scenes seem deliberately shot to make him look non-human.  Because Gish is made to look about ten years old, there's the kinky frisson of "lustful" Chinaman. What did audiences think? Were they appalled or repelled? Did they feel sorry for the Chinaman or did it reinforce their prejudices? Even well meaning liberals had ideas about keeping the Chinese In Their Place. Missionaries  wouldn't take kindly to the idea of a Buddhist reversing their role. How did Chinese audiences react?

Oddly, there were many Chinese stereotypes in western film,  pro, con and neutral. The most famous is probably Piccadilly (1928) where Anna May Wong is the drop dead gorgeous dancer who is dropped dead for crossing race boundaries. In a sense, that's positive because it shows up  racist attitudes,. But it also ultimately reinforces the idea that Chinese are fundamentally dangerous killers with no sense of decency. Ironically, a Southern Baptist like D W Griffith dared to go further, challenging racism, not confirming stereotype.  Racist attitudes kept shifting. It was possible for Sessue Hayakawa to play "orientals" with dignity, even though he was often a mysterious villain. Much more on him one day when I have time.  And because he was successful, he could avoid really offensive parts and move to Europe just before WWII when he would no doubt have been interned as an "enemy alien" in concentration camps for Nisei.

Lon Chaney senior made a speciality of playing both monster madmen and "oriental" villains, some more offensive than others.  In one particularly awful film, Mr Wu (1927), Anna May Wong plays the servant. Thankfully, her eyes glare with contempt. The other ethnic Chinese actress (who appeared in numerous bit parts) simply averts her eyes and thinks of the paycheck.  As for Richard Barthelmess who also shot to fame in Broken Blossoms? He starred in The Show of Shows, but not in the "Chinese fantasy". The following year he went on to make Son of the Gods (1930) where he plays a very handsome Chinese Man whom a white girl falls for. She thinks he's white so horsewhips him when she learns he's not. But she's so ashamed, she wants to die, and begs his forgiveness. Then it turns out he's actually white and was just adopted Chinese. Ludicrous, but that was a way to get around the Miscegenation laws at the time that prevented whites and yellows from blending. It's actually quite a sensitive movie despite the corny ending.

Subsequently, I've found out that the movie was banned in Hong Kong and shown in Shanghai with the shooting scene cut, and for only a week. (At the time Shanghai was divided between western rulers). That would explain why, when it was at last screened in 1970 none of the older generation had heard of it, though they knew Lilian Gish. In contrast, my father and his friends were all devotees of Charlie Chan movies, and China-made adaptations. Not so much for Charlie himself but his sidekick, played by a real Chinese, (ABC) Keye Luke, who continued to be a huge star in Hollywood. NHollywoord movies were big then : when Valentino died, some Chinese gilrs committed suicide too. Big scandal. There's plenty on this site about Chinese movies, cross cultural mixes, Eurasians, Chinese culture etc, please search. Some full downloads as well.
at January 07, 2011