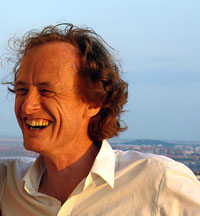 Beat Furrer is on Facebook, where you can hear lots of clips of his work. A good idea, since this performance of his music by the London Sinfonietta at QEH was underpowered and uninspired. If you didn't know Furrer's music beforehand you'd be wondering why he's so highly regarded in Europe. But it does need sharp, idomatic performance, so stick to the recordings (on Kairos the classiest contemporary music label of all) and to what Furrer's posted on Facebook. Listen to Claudio Abbado conduct Face de chaleur).

Furrer's reputation has grown from solid foundations. Twenty-five years ago, he founded Klangforum Wien, one of the most exciting new music ensembles. He's charismatic, energetic and inventive, and his music has depth. Much more satisfying to listen to in the broader stretch than the more publicized Helmut Lachenmann. Furrer is not clever surface flash, but emotionally rewarding, and reveals itself the more the more you listen. The concert's being broadcast on BBC Radio 3 on 12th March and will be available on demand for a week. Listen for Presto, though, where Joihn Constable and Michael Cox do the snappy wit extremely well.

Here's a preview of what I''ve written , full link HERE on Bachtrack, the excellent performance database.

"Highlight of the programme was Nuun (1995-6) almost a classic by  contemporary music standards. Scored for two pianos and pairs of other instruments, it's a series of constantly evolving dialogues that repeat and re-form in myriad combinations. Nuun flows like a river in flood, with dizzying whirlpools of sound, often circular, but dominated by a powerful kinetic thrust. The two pianos, played by Rolf Hind and Zubin Kanga, act like a kind of mad dual metronome, shaping rhythyms that disintegrate, reintegrate and re-surface like undercurrents propelling the piece forward.  The two clarinets (Mark van der Wiel and Andrew Webster) form a secondary pair of "metronomes", also at opposite sides of the platform, giving underlying coherence to the wild turbulence around them. The high bright B flat clarinet merges with the darkness of contrabass, creating mysterious, delicious confluence. Later a sequence of extremely short-breathed chords opens out, adding clarity. Densely-textured as Nuun is, it's inventive, imaginative and expressive. The recording, on Kairos, is much more vivid than this live performance would suggest, but that's because it's Furrer's own orchestra, Klangforum Wien (conducted by Peter Eotvos) for whom Furrer's idiom is second nature. The London Sinfonietta will get there in time.

Before the concert, Furrer spoke about a visit he made to Istanbul where he heard an imam calling the community to prayer. The voice moved from chest to head, creating resonances which could carry over space. The result was Xenos (2008) which has since inspired to Xenos II (2009) and Xenos III (2010). Long, firm brass chords call out confidently, replaced by gentler woodwinds. Again, the idea of dialogue and communication. Particularly striking, though, was the extended quiet section, where chords seem to oscillate in relative silence. Also interesting was the use of accordion (Ian Watson), bringing in an altogether unexpected but apposite element. Xenos feels like sublimated voice. Towards the end the piece dissipates gently, in low murmurs like the sound of breathing......"

".....Part of the London Sinfonietta's mission is to promote music as a living art. Hence the Blue Touch Paper project, where young composers are mentored by more experienced composers. Beat Furrer worked with Naomi Pinnock, whose pedigree is impressive. She's also worked with Wolfgang Rihm and Brian Ferneyhough, Michael Jarrell and Olga Neuwirth.  Her Words (2010) received its premiere in this concert. It's based on a string of words, which don't fit grammatic logic but convey impressionistic meaning. Pinnock further breaks the words down so the listener can deduce deeper meaning from the combination of instrumental sound and word fragments.  Pinnock's learned a lot from Furrer, whose opera Begehren (which I love) communicates the Orpheus myth through snatches of oblique poetry, expressed through the orchestra as well as by voice, communicating to the psyche as well as through the conscious mind. Pinnock creates some interesting effects, The humming clarinets are very effective, as is the accordion. The cimbalom (Chris Bardley) adds an otherworldy presence. Pinnock wrote the piece around Omar Ebrahim's voice, which is amazingly agile and expressive, even when what he sings is so condensed the text is submerged. "
HERE is a link to a great review by Lloyd Coleman a young composer who was at the rehearsals  I loved reading this, and recommend it ! Writing about music is an exercise in engaging with what you hear, thinking and feeling. It's not easy, even with practice, becauyse it throws you into yourself as you're doing it. So cheers, Lloyd, keep it up!
at January 19, 2011