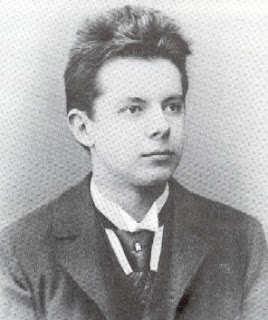 Infernal Dance - Inside the World of Béla Bartók is is this year's South Bank Special, a series of concerts over 11 months spanning Bartók's career. Esa-Pekka Salonen conducts the Philharmonia Orchestra.  It's quite an endeavour - and a Celebration Goulash is being served at the EAT café in his honour (good quality and only £4.85)

It's an important series, since Bartók's place in 20th century music cannot be overestimated. In many ways, it's Bartók who carries Stravinsky's legacy in new directions, influencing composers as diverse as Szymanowski and Elliott Carter.

Significantly, the first concert in the series started with Bartók's Kossuth (1903). It's an explicit statement of intent, for Lajos Kossuth was a nationalist leader who tried to break Austrian hegemony in 1848, the year of Revolutions. Also significantly, Bartók had been studying Richard Strauss, whose popularity has overshadowed his influence on music history. Kossuth was regarded  by Bartók's contempoaraies as "very, very modern" with its clear references to Ein Heldenleben, which Bartók had transcribed for piano. Today it's fairly straightforward and programmatic, but Bartók was only 22. Salonen and the Philharmonia captured the sense of optimism well, so the climax was particularly poignant. As Kossuth is defeated, the Austrian Imperial anthem appears, distorted, and echoes of Magyar themes surface. Vienna, city of dreams, didn't wash with Bartók.

Yefim Bronfman was soloist for Bartók Concerto for Piano no 1 (1926), perrhaps accounting for the huge, enthusiastic audience. This was serious pianism, Bronfman's sure sense of direction assertively negotiation the constant variations of theme. It's an intricate piece, so the balance Salonen got from the Philharmonia was well judged.

But it was in the Miraculous Mandarin that the Philharmonia truly came alive. This was the piece that so ahocked Konrad Adenauer that he banned further performances in Köln. In music history terms, the Miraculous Mandarin stands part way between  Le Sacre du Printemps and Alban Berg's Lulu. Indeed, I was reminded of Lulu Act Three, even without the "Jack the Ripper" references. Could Berg have been thinking of Bartók?

Sound is treated in huge blocks - reminiscent of Stravinsky, polarizing the protagonists by polarizing elements of the orchestra. "Infernal Dance" is an apt metaphor. The movement in the music creates its own dramatic choreography. At times, Mark van der Weil (chief clarinet) throws himself physically into the music, increasing its intensity. Yet Bartók was adamant that the piece was not ballet but pantomime. The action comes direct from the orchestra. Sharp, angular attack, too, from brass and percussion - the "metallic" elements shine, dangerously lethal.  Bassoons and oboes growl, creating tension and mystery. The chorus wails. No need for explicit text setting, for this "Greek chorus" communicates beyond words. And above all, the clarinet rises above all like an elemental force of nature, threatening and alien, yet also savagely liberating. Bartók's exploring strange worlds outside the western mainstream, seduced by the challenges he hears.

This Infernal Dance Bartók series with Salonen and the Philharmonia will get even more interesting as it ventures into later Bartók. Read more about it here on the Philharmonia website. There's a video where Bronfman, Salonen and a Hungarian folk group Musikas get together, and performances of the folk music that inspired the composer so intensely. Later in the series there'll be a complete, 6 hour performance of Bartók's 153 Mikrokosmos. Kurtág and Ligeti fans will be queueing, and fans of Cage.  The series culminates in Noveber with a semi-staged performance of Duke Bluebeard's Castle (John Tomlinson and Measha Brueggergosman). Surprisingly, there's been little media interest in this important series. One newspaper dismissed the whole thing as "ill-advised", without giving any reasons whatsoever. Yet that sort of triteness is what passes for journalism these days. The Philharmonia is one of Britain's finest orchestras and Salonen's done a lot of Bartók, who's hardly unknown. Anyone seriously interested in music will appreciate what the South Bank, the Philharmonia and Salonen are doing.

The whole series is being broadcast by BBC Radio 3 live and online. This one goes on air 3rd February. For a review of the second concert (Cantata profana, Music for strings, perc and celeste and the Rite please see HERE)
For my review of Duke Bluebeard's Casstle, read HERE.
at January 28, 2011

I think I never heard "Kossuth", though I heard of it, but could not help thinking of the almost contemporary Enesco, who was in fact a friend of Bartok. His "Poème roumain", from 1898, must be different but was also a cry for recognition and a stand against imperialism. That the "Poème" makes us hear wordless voices from the mountains could be also significant, since those places could have marked, with Transylvania, the border -and not necessarily the separation- with a fraternizing Hungaria.
I heard recently a glorious Philharmonia under Salonen on France Musique and it seems orchestra and conductor have a built a special relationship few enjoy. They have also been working together for more than 25 years by now -I remember a russian CD when still in my teens.