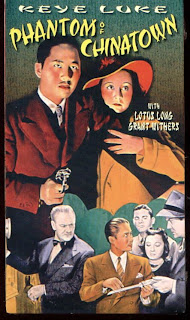 Yellowface movies aren't easy for "real" orientals to watch because too often they show stereotypes that range from ludicrous to offensive. Yet there were many exceptions and several genuine Chinese and Japanese in Hollywood. Phantom of Chinatown (1940) is an important movie because it stars Keye Luke as Detective James Lee Wong and overturns many clichés about Chinese stereotypes.

The character started out as pulp fiction, set in opium dens etc which must have seemed deliciously exotic. In the movies, he was created by Boris Karloff, so when Keye Luke took over it was significant. He'd become famous as Charlie Chan's No 1 son to Werner Oland's Charlie. Oland was extremely popular in China because he was sincere and presented the role in a positive way. Keye Luke was also a factor, since most young, aspirational Chinese could relate to him as someone who was westernized but didn't sell out.

Phantom in Chinatown starts off as typical overblown adventure - ancestor of Raiders of the Lost Ark. Explorers have raided the Ming Tombs and brought back an ancient scroll so valuable that the Professor who led the expedition is murdered. Immediately the American detectives blame Win Lan, the Professor's Chinese secretary, played by actress Lotus Long, who was second or more generation Chinese American. Indeed she looks so meat and milk fed she looks almost white. American detective asks if Win Lan had chop suey for lunch.. "No", says French butler (a caricature, though benign), "She had a cup of coffee and some apple pie". Like any good American. Next, Jimmy's cook, who banters with Keye Luke as an equal. It's a vignette for actor Lee Tung Foo, who hams it up brilliantly. "My name is Fu". he says. Says Jimmy "But in America, it's Phooey". Subtle, but you get the drift.

The cops decide Win Lan must be the killer - she's "inscrutable" after all. Luckily, Jimmy phones the "elders of Chinatown", speaking, as western audiences expected, in convoluted filigree. "Chinese style". Keye Luke hams it up so it's hilarious. That's what they audience want, so they get it laid on thick. Next day Jimmy turns up at the Professor's house to find labourers casually dismantling the sarcophagus of "the" Ming Emperor. As Jimmy says casually "They tell me that the Chinese are digging up the body of George Washington in return". Later the corpse falls out of a broom cupboard - as if!  It turns out that Win Lan is an agent of the Chinese government. The real killer's exposed and the secret of the scroll is returned to China. The movie itself is pretty much standard detective thriller of the time, but Keye Luke adds something extra. Enjoy full download below: