Death of the German Emperor - McGonagall 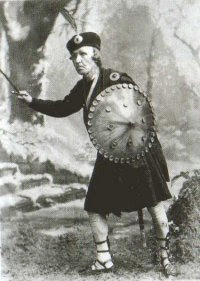 So spake William Topaz McGonagall, never one not to enjoy a funeral, turning his flinty gaze upon Berlin, and the Begrabnis of the Kaiser.

"YE sons of Germany, your noble Emperor William now is dead.
Who oft great armies to battle hath led;
He was a man beloved by his subjects all,
Because he never tried them to enthral."

"Twas in the year of 1888, and on March the 16th day,
That the peaceful William's remains were conveyed away
To the royal mausoleum of Charlottenburg, their last resting-place,
The God-fearing man that never did his country disgrace."

T"he funeral service was conducted in the cathedral by the court chaplain, Dr. Kogel,
Which touched the hearts of his hearers, as from his lips it fell....

"Then there was a solemn pause as the kings and princes took their places,
Whilst the hot tears are trickling down their faces,
And the mourners from shedding tears couldn't refrain;
And in respect of the good man, above the gateway glared a bituminous flame."

"And as the people gazed on the weird-like scene, their silence was profound;
And the shopkeepers closed their shops, and hotel-keepers closed in the doorways,
And with torchlight and gaslight, Berlin for once was all ablaze.
The authorities of Berlin in honour of the Emperor considered it no sin,
To decorate with crape the beautiful city of Berlin;
Therefore Berlin I declare was a city of crape,
Because few buildings crape decoration did escape."

Read the whole sorry tale here and more on the Bard
at January 30, 2011

Email ThisBlogThis!Share to TwitterShare to FacebookShare to Pinterest
Labels: Berlin, Literature and society