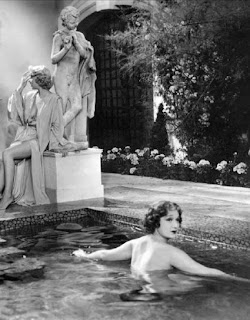 A life as extreme as Lucrezia Borgia's begs dramatic treatment. Donizetti's opera Lucrezia Borgia starts a run at the ENO from 31st January, but on 23rd February there'll be something Completely Different - the "first live opera in 3D" (as opposed to the first non-live opera in 3D which was ROH's Carmen which is being screened for the first time on 5th March)

Please read my review of the ENO production HERE (It explains the film/opera hybrid more clearly).

What makes the ENO fun is that it's visionary. This Lucrezia Borgia isn't an ordinary film of the opera but a Gesammstkunstwerk.. Because Lucrezia's life was so complicated and shrouded in mystery, it lends itself to cinematic ideas like flashbacks and parallel time frames. treatment. The photos come from a film of Lucrezia Borgia made in 1935 by Abel Gance, whose Napoleon (1927) is one of the most influential classics in cinema history.

Film director Mike Figgis has created 6 vignettes, filmed on location in Italy, and woven these into the production. His focus, though is on the opera itself. Please read this interview in the Financial Times, "Donizetti goes digital". Figgis says that his aim was to keep the opera intact, the vignettes forming frames to make it "even more like the sparkling jewel it is".

Figgis is famous for integrating the technology of film into his films themselves. "The Medium is the Message", as Marshall McLuhan said, where meaning expands from appreciating how images are created. No need to panic if you're technophobic. It's as simple as appreciating a sculpture knowing how it grows from the grain of the wood or the structure of marble.

The broadcast on 23rd February is also described as "The World's First Quadcast". The ENO has teamed up with Sky so the broadcast will be carried by Sky Arts 2 (HD), Sky 3D and live into selected cinemas in 3D around the UK. There'll be a deferred relay in 2D into selected cinemas internationally. The Quadcast element comes from the Sky Arts 1, broadcast directed by  Figgis, and will allow audiences a closer understanding of his concept as well as including interviews with people behind the scenes. 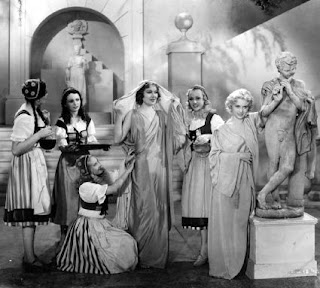 So ENO's Lucrezia Borgia might appeal to technophiles who might have fun at first with multimedia, and then become hooked on the music and drama.  But I don't think it should worry technophobes, either. The idea of blending stage and backstage isn't new in itself. Remember the outstanding Opera North film of Benjamin Britten Gloriana which turned the contortions of the script into a virtue and brought out the depths of Britten's vision?

Filming opera is undiscovered territory, whose language we're still learning. Decades ago, music was filmed with cameras rigidly fixed into position, musicians grimacing as uncomfortably as possible. But music isn't like that. Much better filmed music that captures its spirit and fascination. So, too, could well-filmed opera add elements that enhance and enrich the experience.
Lots more on this site about opera, film, and opera on film - please explore!
at January 08, 2011