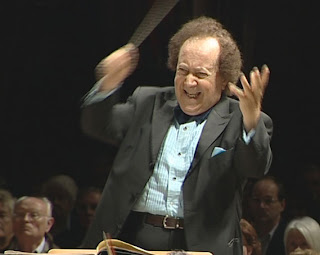 Youth orchestras from South America get huge publicity but even more remarkable is the story of the very first of all, before the term "youth orchestra" became current. It was the Uruguay Orchestra, organized by José Serebrier. "When I was still in short pants,” Serebrier says, “I took it into my head that I would create a Festival of American Music”. He'd started the orchestra when he was 11 and three years later they performed in front of the President and were photographed in the newspapers.  In their repertoire they even had Charles Ruggles, Edgard Varèse and one of Serebrier's own works. Ambitious enough by any standards, but in Uruguay in 1949 this was truly remarkable.


Serebrier's whole life has been a series of amazing, remarkable adventures, but the story behind his own First Symphony is so wonderful that it's worth telling again, especially now that it's been released on a new Naxos CD. Serebrier is one of the most prolific conductors in the world, with over 200 recordings, including the celebrated Glazunov series and the famous recording of Charles Ives Fourth Symphony, generally considered "unplayable" at the time. Yet Serebrier is a composer, too. The Naxos release is a collection of his own major works.

At sixteen, Serebrier went to Philadelphia to study at the Curtis Institute. One day, while crossing a busy street, he bumped into a man and dropped the manuscript of the composition. "The stranger was a cellist, rushing to the airport to join the Houston Symphony. He instinctively asked if he could carry the score along to show to Leopold Stokowski,....  I had another copy, so I agreed, not expecting anything from this gesture. Few conductors would take such an idea seriously. A couple of days later, the Curtis telephone operator started giving me messages to call Mr Stokowski. I was sure it was a joke, as I used to leave messages for other students to call Bernstein or Rubinstein. Eventually, the Institute’s Director, Efrem Zimbalist Sr, called me to his office. “What are you doing? Maestro Stokowski called me to say he’s been trying to reach you urgently for two days!” We called from his office. There was this highly accented voice telling me: “We tried doing the première of the Charles Ives Fourth Symphony but it proved impossible. Orchestra can’t get past first bars. Need a première. Press invited: Time magazine, Life, UP, AP. We do your symphony première instead of Ives. Please bring music. Rehearsals start in two days.”

And so by a sheer stroke of luck, Serebrier's career was launched. He became Stowkowski's close associate. There are historic clips of the two of them conducting Ives's Fourth on Serebrier's  website.  which is worth looking at because it's lively, packed with information and down to earth - like the man himself! Not long ago., Serebrier recorded Stokowski's Bach transcriptions. We're so used to purist Bach now that the CD was a reminder of the freedom with which music was once made.

Naxos has released quite a lot of Serebrier's own music but the new CD is a good  introduction. It includes Nueve, a concerto for Double Bass and orchestra (1971, two pieces inspired by tango, the "Winter" Violin Concerto and the new They Rode into the Sunset,- Music for an Imaginary Film (2009) Simon Callow narrates!  Read more about the pieces HERE.
at January 13, 2011