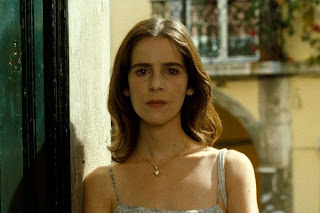 Reactions to The Portuguese Nun (Eugène Green, 2010) say as much about the viewer as the film does. It's fantastic, but at first everything seems to be wrong.

Julie, a French actress (Leonor Baldaque), arrives in Lisbon to shoot a movie, but no-one else has arrived. A tram moves through the city's vertiginously steep cobbled streets. Houses are perched at strange angles, but you're lulled, for Lisbon really is like that. Then you realize something's not right. The streets are completely deserted.  When other people appear they stare directly at the camera, making uncomfortable eye contact. Actors don't do that, nor ordinary folk. Movement is unnaturally stilted, shots held long after they should move on. Then you realize that it's deliberate. You're being nudged into an alternative reality where time and logic don't apply.

Every encounter is extraordinary. A stranger is about to kill himself and changes his mind on meeting Julie. His apartment's lit by candle. Then as mysteriously as he came, he disappears from the story. Julie meets a six-year old boy, Vasco, in a largo (small open square). In a disco, she's picked up by a man whom she decides is the reincarnation of Dom Alfonso, a gay king. Even stranger he agrees. In a streetside chapel a young nun prays in ecstasy, sleeping only between Matins and Lauds.  By now your antenna for logic should be vibrating extreme alarm. Something's definitely very odd..

Then it dawns on you that the movie is like a dream, where things move in slow motion, where every word carries portent, and every incident is pregnant with meaning though it's not rational or followed through. Dreams are like that. Logic is irelevant but they feel intuitively right. Eventually Julie confronts the mystery nun in the chapel. (Julie's playing a nun in the movie, and filming it in the same place). "I am laying a siege on God" says the nun. She prays contemplating ectasy in the full faith that God's mysteries will reveal themselves in their own way even if we don't notice. The original nun Julie's acting about lived in a time when convents were so dissolute that people stopped believing and Portugal was "for once, in the avant garde". So says the nun! Ironically, this is one small detail that's true, woven into the narrative blurring the joins between reality and fantasy. 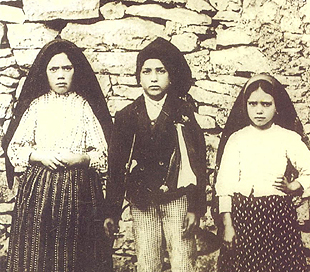 The dialogue between Julie and the nun in the chapel is utterly surreal, yet, as in the most wonderful dreams, it feels like profound revelation, though it doesn't make logical sense. Yet for Julie, it's a turning point,  and she realizes that the point of life is to do good for others. She adopts Vasco. which might work in a movie but isn't nearly so simple in real life. Julie's clear, unsettling stare and heavy brows remind me of baroque Madonnas - or the children who saw the Virgin at Fatima. There is nothing logical in what they saw, but their miracle - or dream - has still managed to inspire.many, whether or not it's objectively "true".

Then you start to wonder what else there is in this dream fugue where simple things carry such weight? Why does Julie speak fluent Portuguese although her Portuguese mother died when she was a child? How can a child like Vasco exist without papers? And who are the film crew anyway, they're all speaking Portuguese, not French. We know that Eugène Green the director doubles as the film director Eugene Verde,  But who is Eugène Green?. There's a film called The Not So Great Eugène Green but he's not involved in it. The main site with info is called "Little white lies". The man himself doesn't leave much of a paper trail.  The Telegraph critic states outright that he doesn't know Green's work. The Observer critic claims to,  so perhaps  he might explain. Is there a bigger story here than meets the eye?  Is  Eugène Green as mysterious as Julie?. He's fascinating, anyway as he's created an audaciously imaginative movie that will utterly confound those who take things too literally.

"Life is too important to be taken seriously". Humour often disguises wisdom. Then the hints make sense. "I don't like French films" says the hotel clerk, "Too intellectual". This is a French film, yet the key is not to be intellectual but to drift into its gentle, unpretentious good humour. Dreams fall apart when you're too self conscious, but then you lose their magic.  That's why I loved The Portuguese Nun (currently screening at the ICA). In its quirky, understated way it's sending up the whole idea of art as a conscious process, and telling us, perhaps, to stay cool and absorb without always having to be "right". And as for Eugène Green? He reminds me strongly of Fernando Pessoa, whose surname simply means "person". Pessoa created multiple identities who each wrote in individual, distinct styles. Truly amazing personality and work.  Surreal, baroque, Kafka with warmth, wit and colour. Pessoa is a lot like Lisbon itself, operating on many different levels of time and place at once. Hence the film's loving vistas of narrow cobbled streets and dizzying angles, the tower of Belém, and the idea of a nun from the past (based on a novel) and a movie about a movie being made about her. Devious puzzles! Pessoa lives! Get the DVD when it comes out and enjoy it with a bottle of tinto.
at January 24, 2011