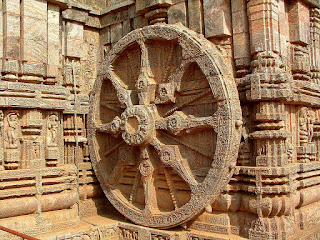 High hopes for Vladimir Jurowski's Zemlinsky Lyric Symphony with the London Philharmonic Orchestra at the Royal Festival Hall tonight :after a wonderful performance of Peter Eötvös Shadows. It was an unusual set up - soloists in the centre of the orchestra, brass and winds backwards to the audience, so their sound was naturally oblique. A large ensemble, yet conducted with such sensitivity that Eötvös's gossamer textures shone beautifully.

Jurowski is a master of fine detail and balance, which can be virtues with pieces like Zemlinsky's Lyric Symphony where so much is happening throughout the huge ensemble. On the other hand, too much attention to detail blurs lines and dulls colours. Zemlinsky structured the symphony, of alternating song and orchestral interlude. It's almost a series of concentric circles, each section in its own orbit, but given horizontal coherence by short snatches of theme that return, as if in cyclic motion. In Indian cosmology, the Sacred Wheel is the symbol of time and growth, erosion and renewal. Thus Zemlinsky incorporates the gist of Tagore's text into the very substance of his music. Like a wheel, the Lyric Symphony surges forward as its sections turn, but the movement needs to be made clear rather than submerged in detail.

Melanie Diener was excellent.  The fourth song is in many ways the critical moment in the whole symphony. Diener understood that the voice should sound young and fragile, but it's also powerful, for it represents the future. That combination of vulnerability and forcefulness isn't easy. The Lyric Symphony is infinitely more than a sex romp,  just as Das Lied von derr Erde is more than a hymn to alcohol abuse.

Zemlinsky is careful to emphasize the still, watchful mood, so the words Sprich zu mir, Geliebter penetrate, even though they're quietly enunciated.Around the words, he writes detail - stings and weinds murmuring like the trees in the text, but critically they are background, receding into the distance. The beauty of the moment is lost when the background intrudes on the voice.

Thomas Hampson showed the gravitas of greater age, which isn't at all inappropriate in this music. He made his final lines glow with meaning : Ich halte meine Lampe in die Höhe, um dir  auf deinem Weg zu leuchten. An artist like Hampson always has something to show us. Jurowski had much better soloists than Salonen had two years ago when he conducted Zemlinsky's Lyric Symphony with the Philharmonia. Yet Salonen's reading was more focused, although his orchestra needed much  more rehearsal time, having exhausted themselves into a magnificent Gurrelieder shortly before. I5 rem9nded me of old recordings where technical stanadrds are poor, but there's verve.

Orchestrally, what would have helped Jurowski and the LPO was less attention to minutiae, more to the overall dynamics. Rich as Zemlinsky's textures are they're not Hollywood so much as delicately transparent washes, c9ontrasted with moments of glory. Träume laasen sich nicht eingefangen (Dreams don't let them selves be captured). As Jurowski demonstrated in Liszt and Eötvös, he can do gossamer beautifully, so why not apply the restraint to Zemlinsky? Details are wonderful,, but when they're all over polished and given equal weight, textures become congested and hold up flow. The Wheel should move forward easily, not become enthralled to its own beauty.

Please look at my numerous posts on Zemlinsky, (Here on LS, a symphony I lived with and loved for years) Jurowski, Mahler, Schoenberg and related composers. PLENTY on this site, take the time to explore.