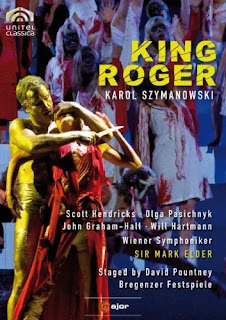 It's interesting when you get to know an opera through recordings and then come to a filmed version.  Karol Szymanowski's Krol Roger became famous outside Poland (where it's now regular repertoire) when Simon Rattle recorded it, while he was still in Birmingham. Thomas Hampson sings the King, reason itself for making it a classic. Highly recommended too is the 2004 recording from Warsaw conducted by Jacek Kaspszyck. That has Piotyr Beczala as the Shepherd - divine!

This new DVD, from the Bregenzer Festspeile in 2009, has its merits. Mark Elder conducts the Wiener Symphoniker, so orchestrally this is good, clean and clear. However, after having heard Pierre Boulez's recent recording of Szymanowski,  no-one else stands comparison. (Amazing recording, review to follow) Vocally, this Bregenzer performance doesn't break new ground, either, though it's pleasant enough. Scott Hendriks sings the King, Olga Pasichnyk Roxana the Queen and Will Hartmann is the Shepherd. Pasichnyk's Roxana Song is gorgeous, and cuts sublimely through all round her. Goosebumps! 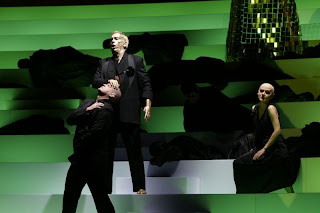 The downside of this DVD, though, is the production, directed by David Pountney. The First Act's Byzantine marble church becomes a  series of cool "marble" steps with funnels of crystal that emit coloured light. Elegant, perhaps evoking art deco lines, though the style's a little early for the opera, which Szymanowski started in 1918.  Nonetheless, it's attractive and fits the idea of a Court and Church desiccated by formality, described in the libretto. The Court worships a chaste Christ and don't take kindly to the alternative "Good Shepherd" who appears. This Shepherd's God holds grapes in his hands and wears a headdress of ivy : Dionysius, though the text doesn't name him. In Pountney's production the mysterious forest groves and pools are created through green light 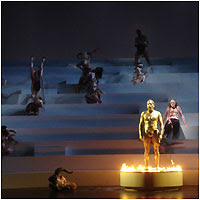 Even more shocking is the Shepherd's claim that his God is "as beautiful as I am". Roxane almost immediately succumbs and later willingly sacrifices herself to this new God that praises lust. Krol Roger, being King, has a responsibility to the old God, so takes a while longer to to react. Eventually, he too declares for the Shepherd. The cool marble hall then becomes a giant melamine chopping block, everyone covered in fake blood with dancers dressed in animal heads. It's not nearly as abattoir-like as might seem, and certainly the text refers to blood sacrifice.

But why? What does Szymanowski mean? His many references to Byzantium, to "lotus flowers" and the exotic East are easy to understand in the context of his work as a whole. Maybe the Shepherd represents a more sensual alternative to mainstream Christianity . By cloaking the Shepherd in gold and circling him with fire, perhaps Pountney wants us to think of him as a brazen idol. But why should the King be so disturbed?  There's a strong homo-erotic undercurrent. Certainly Edrisi, the King's adviser, hints that the King doesn't really connect to the Queen in ways that matter. She pops up from between his legs, singing her elusive song. The costumes (Marie-Jeanne Lecca) tell the story. The shepherd appears in a red dress similar to the Queen's, complete with rose (symbolic in the text) and Krol Roger is gradually seduced, until he, too, wears a facsimile of the gown. Why Roxanne's bony and bald, I'm not sure, but it destroys her femininity. At the end, Krol Roger plucks his heart from his breast, symbolically united with the morning sun. Christ, Church and Kingdom, all sacrificed.

Having learned the opera from good recordings I guess I've developed images in my imagination that derive from the freakily hyper exotic colours in the music and haven't worried too much about why.  Each new production means taking on board someone else's point of view which is valid enough in this case. But I suspect it exposes something in Szymanowski's vision. He was probably gay in a society which even now is homophobic. The deliberately anti-Christian message of this opera wouldn't sit well with devoutly Catholic Poland. Definitely not  Pope John Paul II's style. Nor too popular with Communists, either. But what makes it such a seductive vision is the music. It's so beautiful that it makes everything seem possible, however illogical or kinky. photos : Karl Forster, Bregenz Festspiele
at January 03, 2011