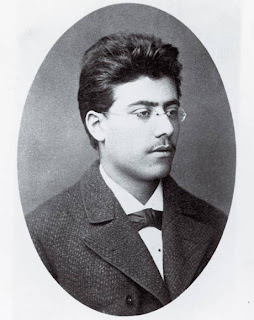 Vladimir Jurowski conducts the LPO in  Mahler's Das klagende Lied on Saturday at the Royal Festival Hall. For the review please see HERE)  For a much more detailed review of DkL (Gardner) please see here. He opened the 1997 South Bank season with a marvellous performance of this work, so it's definitely worth going to. Mahler generally eludes Jurowski who for a long time skirted round the edges with less demanding pieces like Blumine and Totenfeier. But with Das klagende Lied, Jurowski shines. That in itself says something about the composer.

Newcomers to Mahler always ask why Mahler didn't write operas, since he was a great opera conductor. But once  you really get into Mahler, the answer is clear. Mahler's main drama was his own search for existential meaning, ie an internal spiritual journey. Opera, by its very nature,  is about characters and plot, even when there's a deeper purpose, as in Wagner. Lots more reasons, which both Prof Henry-Louis de la Grange and Donald Mirchell have gone into.

Mahler began writing Das klagende Lied when he was only 17. There are references to Wagner - impossible for an impressionable young man then to ignore - and references to Carl Maria von Weber, whom Mahler also revered. At the time the photo was taken Mahler was embarking on a completion of Weber's Die drei Pintos, partly as a favour to Weber's family. But consider Weber as opera composer. Even Der Freischütz is better known in orchestral performance than live theatre. Fundamentally, Das klagende Lied is a cantata where the voices are embedded into the orchestra, like extended parts, not developed as characters, though there is a loose narrative.

Jurowski's Das klagende Lied is wonderful, I think, because he can access it with semi-operatic verve, following the story as it unfolds. The structure doesn't matter so much as the colour, and excitement serve as thrust. Listen for thr thrilling writing for harp and trombone (especially atmospheric in Der Speilmann) and layer after layer of hunting horns, distant and just present on the horizon. Like the Ring, Das klagende Lied is about theft and retribution, but on an altogether more domestic scale. Mahler's voices don't overpower the pastoral Wunderhorn intimacy.  There aren't any big, deep themes in this piece - the composer's still in his teens. But it's indicative of where his focus will lie - in songs and symphonies informed by song.

Recommended recordings :  Nagano, Chailly, Boulez and Rattle. Oddly enough, Haitink isn't on fire, though his soloists are good. I think Das klagende Lied needs a light, effervescent touch so the colours don't get bogged down in anything too profound.Actually, perhaps Jurowski might consider conducting this with the Orchestra of the Age of Enlightenment. It would suit the muted timbre of period instruments extremely well. Tomorrow, Jurowski's conducting Zemlinsky. Please read the TWO pieces i've written about Zemlinsky's Lyric Symphony this month, HERE and HERE.
at January 25, 2011