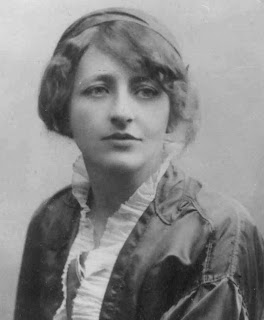 Radical mother? Franziska, Gräfin zu Reventlow (1871-1918), Queen of the scene in Schwabing, heart of vibrant Secessionist Munich. She hung out with artists, writers and thinkers, but her art was life itself.

Reventlow's father was a Graf (prince) from Husum in North Frisia, where the flat landscape opens out to the sea, like Holland, only colder. The family was ancient and aristocratic. The name still opens doors today. Had Fanny (as they called her) chosen, she could have led a grand, comfortable life. Instead, she rejected it all at a very early age. No Romantic "New Woman" role model to follow, and a society much more repressed than most. Reventlow had to invent herself.

Gravitating to Munich in 1896, Reventlow landed smack in the middle of the hippest scene in Europe at the time. Jugendstil, and the first Secession, was invented in Munich a decade before it hit Vienna. Simplicissimus, the satire magazine, had just been founded, and the atmosphere was irreverent, progressive, innovative. Reventlow wrote for the magazine and others. But then as now, there wasn't any money in  journalism, especially the  avant garde who prided themselves in not playing money and status games. Besides, she was penniless, having lost her inheritance in a bank collapse. She wrote books, too, but also had to scramble a living selling other things, like milk, insurance (new industry) and herself. Prostitution, she reasoned, was no different from marriage, and didn't tie you down as long. Reventlow lived on the edge, scam marriages and all. Famously she posed nude for arty photos. On a beach, not in a studio, in 1900! 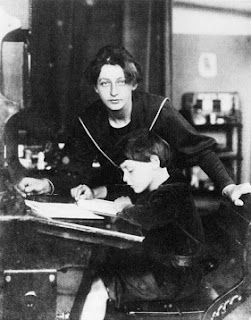 Soon after arriving in Munich she gave birth to a son called Rolf, father irrelevant. Most of Reventlow's friends weren't hands on parents or even hetero but Bubi the Baby became the mascot of their lives. Reventlow held breast feeding parties so they could watch in awe, the spectacle of The Eternal Feminine in action. Rolf was brought up free range. He didn't go to school, but had a good education from the adults around him. From photos it seems he stayed up nights at wild, drunken parties, but looked  right and fresh. Perhaps the photos were posed to look wilder than they were and Bubi was protected as fiercely by his mother as a tigress protects her cubs. In 1914, Reventlow helped him escape conscription by rowing him across Lake Constance into Switzerland. Four years later, Franziska was dead, from injuries sustained in a bicycle accident. Read more HERE.

For all the freedom he was raised in, Rolf wasn't a typical hippie child. The circles he grew up in preached free love and sedition, but also valued committment.. During the Weimar period, Rolf worked as a left wing journalist with his wife Else Reimann.  Rolf became a target for the Nazis who tried to assassinate him within weeks of coming to power. He fled, first to Vienna, then Russia and later to Algeria where he worked in newspapers, not returning to Germany til the mid 1950's.

Else had a rougher time. Forbidden to work by the Nazis, she returned home to Elbing in  Prussia, now part of Poland. As a girl in 1917, she'd been a refugee from the Russian invasion. In 1945 she had to escape again, this time crossing the Haf (the huge lagoon near Danzig) in midwinter. Eventually she made her way back to Munich. Rolf is buried in Locarno with his mother but I suspect Franziska would recognized something of herself in formidable Else.
at January 11, 2011